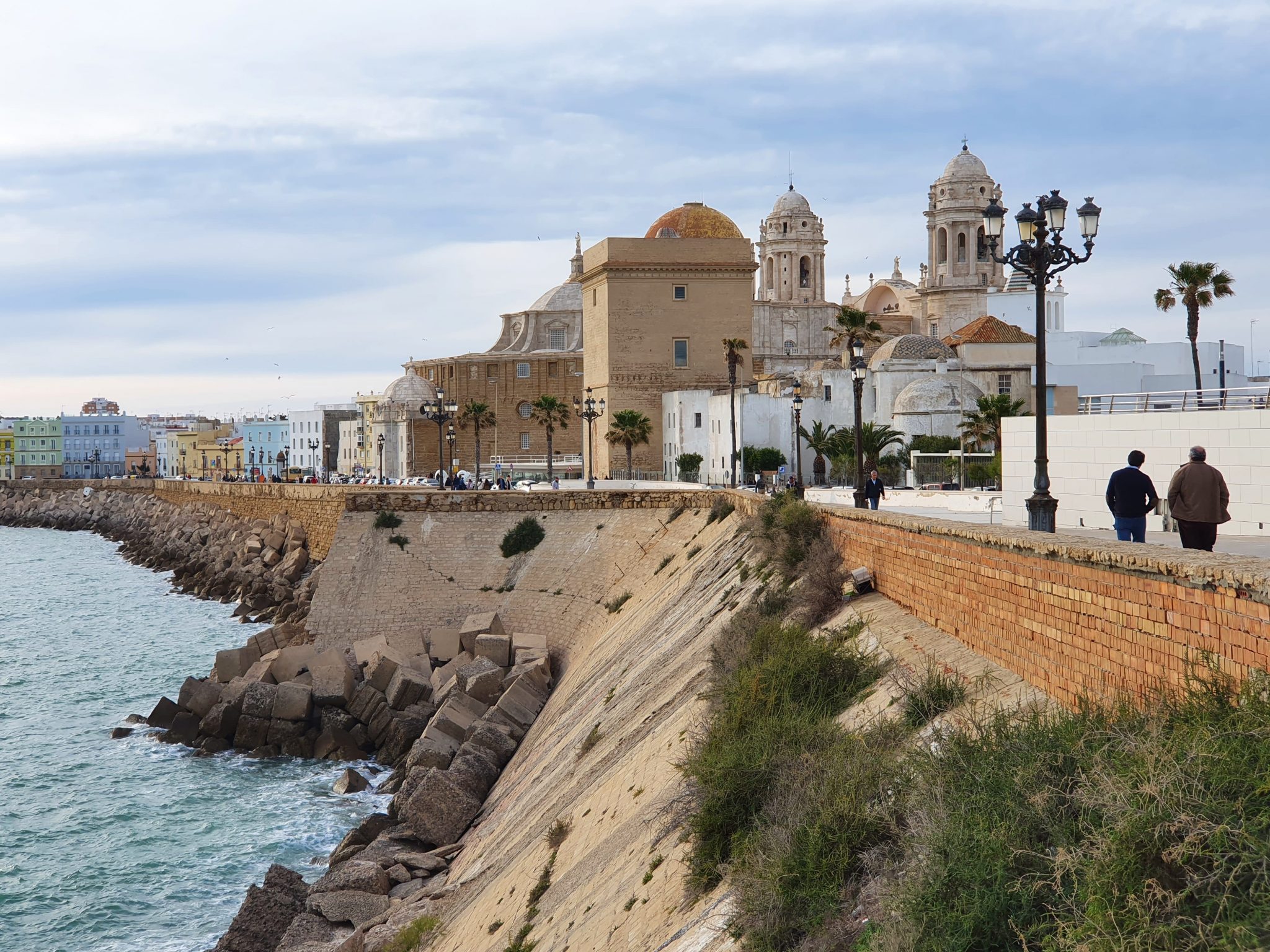 Love for Cádiz! Why do I hear so little about this Spanish coastal city? Barcelona and Valencia, I read plenty about those, but I don’t come across much about Cádiz. This port city in the far south of Spain may not be the easiest to reach, but that’s no reason to skip it. I loved my stay in Cádiz. Together with my boyfriend, I spent a full week there and little by little I fell more in love with this place every day. In this article, I give you 9 reasons why you should start planning a visit to Cádiz.

1. This is the oldest city in Western Europe

The city was founded in the year 1100 BC, but some claim it goes back even further to the 8th century BC. Culturally, the city has had several phases. The Phoenicians (Mediterranean sea traders) were the ones who founded the city under the name Gadir, then it was conquered by the Romans. They called the city Gades and built a Roman theater. Later, the Moorish rulers came to Cádiz (which they called Qadis), and after that the Spanish Christians. The Moorish influence is reflected in the pink Gran Teatro Falla. Not built at the time of the Moorish rule, but inspired by Mudéjar architecture. The Christians have built many churches with the Cadiz Cathedral as their crown jewel.

2. It is a city made for wandering

Walking from one square to another. Cádiz is a lovely city for wandering around and randomly stumbling upon insta-worthy squares and streets. Plaza de San Juan de Dios is the starting point for many. It is located near the port and train station and is home to Cadiz’s town hall. Most people continue by walking via Calle Pelota to Plaza de la Cathedral. You guessed it, the square of the Cadiz Cathedral. This is the busiest but also the most beautiful place in Cádiz.

After the Cathedral, most tourists head towards the quaint Plaza de las Flores (the flower market) and Plaza de la Libertad (home of the market hall). This is as far as most get, but there are more beautiful squares in Cádiz. For example, walk towards Plaza de San Antonio and Plaza de Mina. More tranquil areas and to get there you will cross pretty streets like Calle Ancha.

3. Cádiz is pretty from above

Cádiz is already beautiful from street level, but from above I found the city to be even more stunning. Looking from a viewpoint, I could clearly see that most Cadiz houses actually have white and yellow colors. I visited two viewpoints: Torre Poniente (the tower of Cádiz Cathedral) and Torre Tavira. Both are worth a visit because they each give a slightly different view. Torre Tavira is rather special because it is part of a grand collection of watchtowers built in the 18th century to notice possible threats from incoming enemies. Often they were placed on top of houses of wealthy merchants. Having a tower on your house was a status symbol.

Good to know: tickets for Torre Poniente are sold in the cathedral, not in the tower. So you first walk through the cathedral and then you enter the tower with the same ticket.

4. It has a market hall with a food court

Plaza de la Libertad is home to the city’s market hall: Mercado Central de Abastos. Inside you will find the standard everyday market goods. Vegetables, fruit, meat, and fish. But the special thing about this market is that there is also a food court with all kinds of small dishes. A nice place for lunch. There is even a Lustau stall to buy a glass of sherry wine from Jerez. For vegetarians and vegans I recommend Las Niňas Veganas and La Sarten con Carino y Huevos (for the tortilla). I also remember that there was a stand with Thai dishes.

5. You can choose from multiple beaches

Because of the long stretch of coastline, Cádiz has more than one beach. The most famous beach is Playa de la Caleta. Quite small, but located in the center of the city. La Caleta offers the advantage that you can combine sunbathing with sightseeing. It is located between two 17th-century castles: Castillo de Santa Catalina (free entrance) and Castillo de San Sebastian. It is only possible to visit the first one, San Sebastian is temporarily closed. However, I would still recommend walking the path up to the castle gate for a skyline view of Cádiz. And lastly, there is also a historic building right on the sand of Caleta: a posh 1920s bathhouse.

La Caleta can get crowded. For a quiet beach, it is better to move out of the center. Near the TV tower (20-min walk from the center) there is Playa de Santa Maria del Mar. I loved this beach. Soft sand, clean, and an awesome view on Cádiz old town. Further away there are more beaches: Playa de la Victoria and Playa de la Cortadura. These are the best to reach by C1 train, station Estadio and Cortadura.

6. Experience the feeling of Cuba in Europe

I myself have not been to Cuba yet, but according to many, the long boulevard of Cádiz resembles the famous Malécon boulevard in the Cuban capital Havana. This combined with the light pastel colors of Cádiz’s old town has led to the nickname ‘Little Havana’. But apart from that, the boulevard is also a beautiful place to explore. Well maintained, clean, and has lots of greenery. I especially liked the section at Paseo Santa Barbara and Jardines de Alameda Apodaca.

When walking on the Cádiz boulevard, I recommend taking a look over the edge to spot the cats. There is a whole colony of cats living on the boulders on the coast. They don’t seem to beg for food or attention, as they are maintained by a local group of volunteers (Cadiz Felina).

Rather cycling than walking? Perhaps this cycling tour is a perfect way to see more of Cádiz.

7. You can surf in Cádiz

Do you like (wave) surfing? Cádiz is perfect for surfers. There are several surf schools that sometimes also offer a combination of Spanish classes and surfing. My boyfriend surfed with Hopupu Surf Club and liked it. Generally, winter is the best time to surf in Cádiz. The waves are a bit bigger then. However, we were in Cádiz at the beginning of April and there were still regular surf lessons organized. Another popular place for surfing is Playa de la Cortadura.

8. The largest carnival of the Iberian Peninsula is celebrated here

February is Carnival month. And let Cádiz be the scene of the largest carnival on the Spanish mainland. The annual festival in Cádiz is more than 600 years old and originated by trade. The Italian traders who came to the city told tales about the Venetian carnival and the gaditanos (inhabitants of Cádiz) were inspired. They started organizing their own carnival with the sea as its theme. That is why a lot of fish is served and the old fishing district La Viňa is one of the main Carnival areas. Outside of Carnival, La Viňa is also worth a visit. It is colorful and lively, and there are many restaurants and bars located here.

9. Cádiz is a good base to explore more of Andalusia

Going to Cádiz also offers the chance to see more of the Andalusia region. For example, take the train to El Puerto de Santa Maria or Jerez de la Frontera. Two sherry towns with bodegas offering sherry wine tastings. In addition, El Puerto de Santa Maria also has a beach and Jerez de la Frontera has an Alcazar (Moorish castle). Both are worth a visit!

Interested in seeing the Pueblos Blancos (a collection of white villages)? From Cádiz you can visit Conil de la Frontera, a white-washed town nearby. Buses leave every hour from Cádiz bus station. Tickets can be purchased from the driver and cost between 5 and 6 euros per person (bring cash). From Conil, you can take the bus to another white village called Vejer de la Frontera. The ride is only 20 minutes, but unfortunately, the buses don’t go that often. It is possible, but planning is key.

Where to eat in Cádiz?

Where to sleep in Cádiz?

We rented an apartment because it was a workcation for us. We needed a space with proper desks, good internet, and a kitchen. Are you looking for a nice hotel? Then I recommend checking out Planeta Cadiz Hostel or Dormos Hotel.

Click here for an overview of hotels in Cádiz.

How to get to Cádiz?

It is not possible to reach Cádiz directly by plane. The city does not have an airport. When you fly to Cádiz, you fly to Jerez de la Frontera. Jerez Airport has a train connection with Cádiz. The cheapest option is the C1 train, a local commuter. The ticket is around 4 euros and the ride takes 1 hour. There is also an MD train with the same route, but it runs less often and the ticket is slightly more expensive (around 6 euros).

And that was it: 9 reasons why you should visit Cádiz. 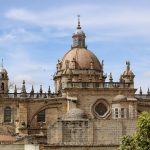 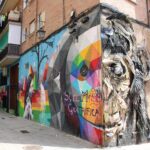