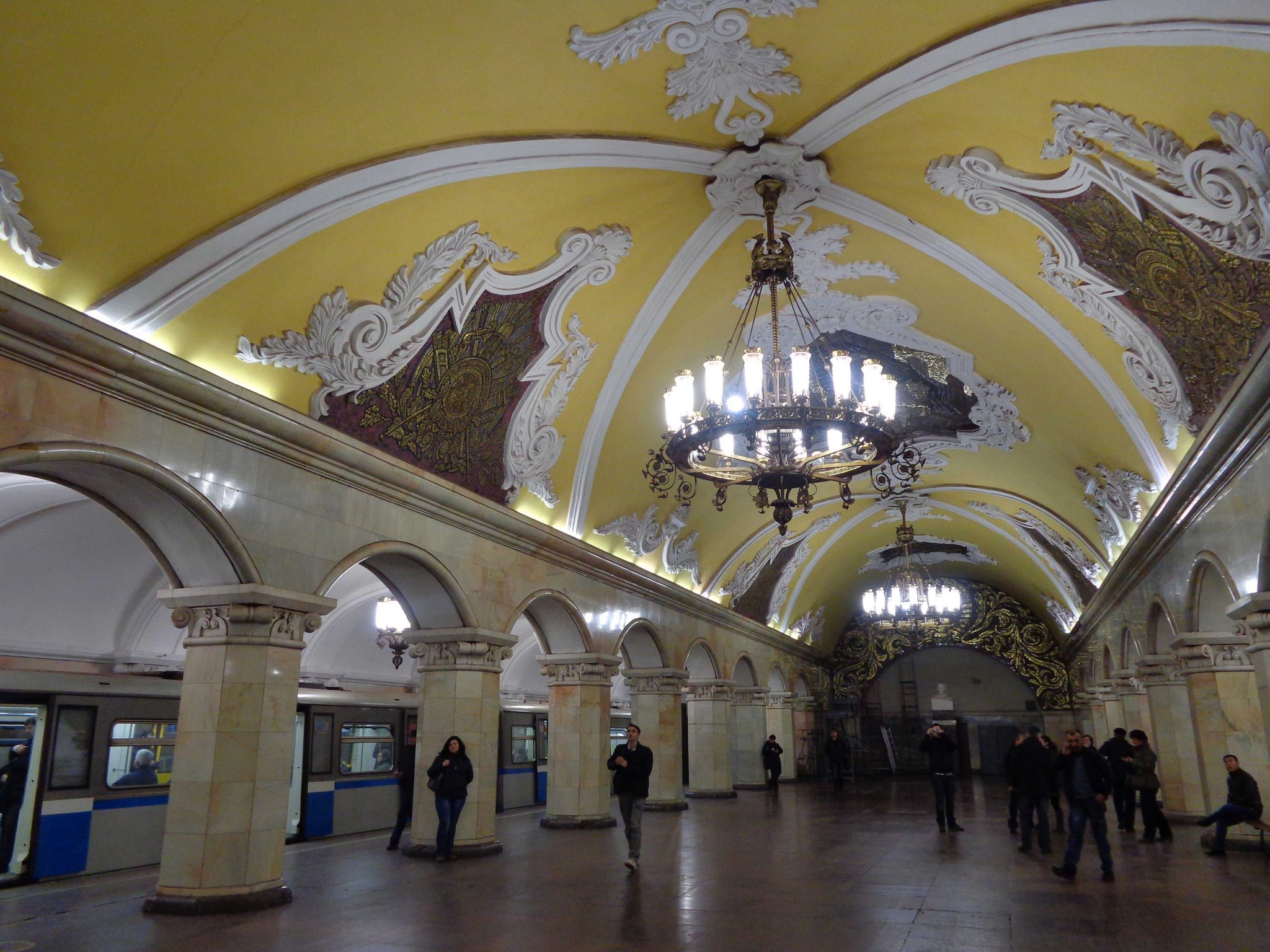 Moscow and her underground palaces: the metro stations

Riding the metro in Moscow is inexpensive way of getting around the city. An one way ticket only costs 30 rubles (60 eurocents, 0,80 US dollars) do). To get to the platform, you  most likely have to face a very steep escalator. On the escalator the Russians are well mannered people. One person per step and everyone stands on the right side. At the bottom of each escalator there is an  ‘escalator controller’. This usually is a quite heavy person in a small glass cubicle staring at four screens showing the tape of the escalator. There are times that they yell something through the microphone (someone is not standing on the right side), but most of the time they do absolutely nothing.

On the platform the Russians leave their manners behind. When the metro arrives, it’s every man for himself. The doors open, people inside get out and then everyone pushes himself in the metro. No one knows when the doors shut. That could be any moment. No zoomers, no bells, just a loud bang.  Then the metro accelerates to an high speed, makes a loud of noise during the ride in order to brake hard for the next station.

But then again, we weren’t there for the metro ride. We came to see the amazing decorated metro stations. Real gems! These underground palaces were built in the 1930’s and 1940’s to tell the communist story to the socialist farmers and workers.  During their commute to work the metro stations reminded the worker class of the communist history. Leader Vladimir Lenin and the hammer and the sickle are prominently shown.

These metro stations are the most beautiful stations in the world.  One even prettier than the other. Getting lost here isn’t a bad thing at all, right? 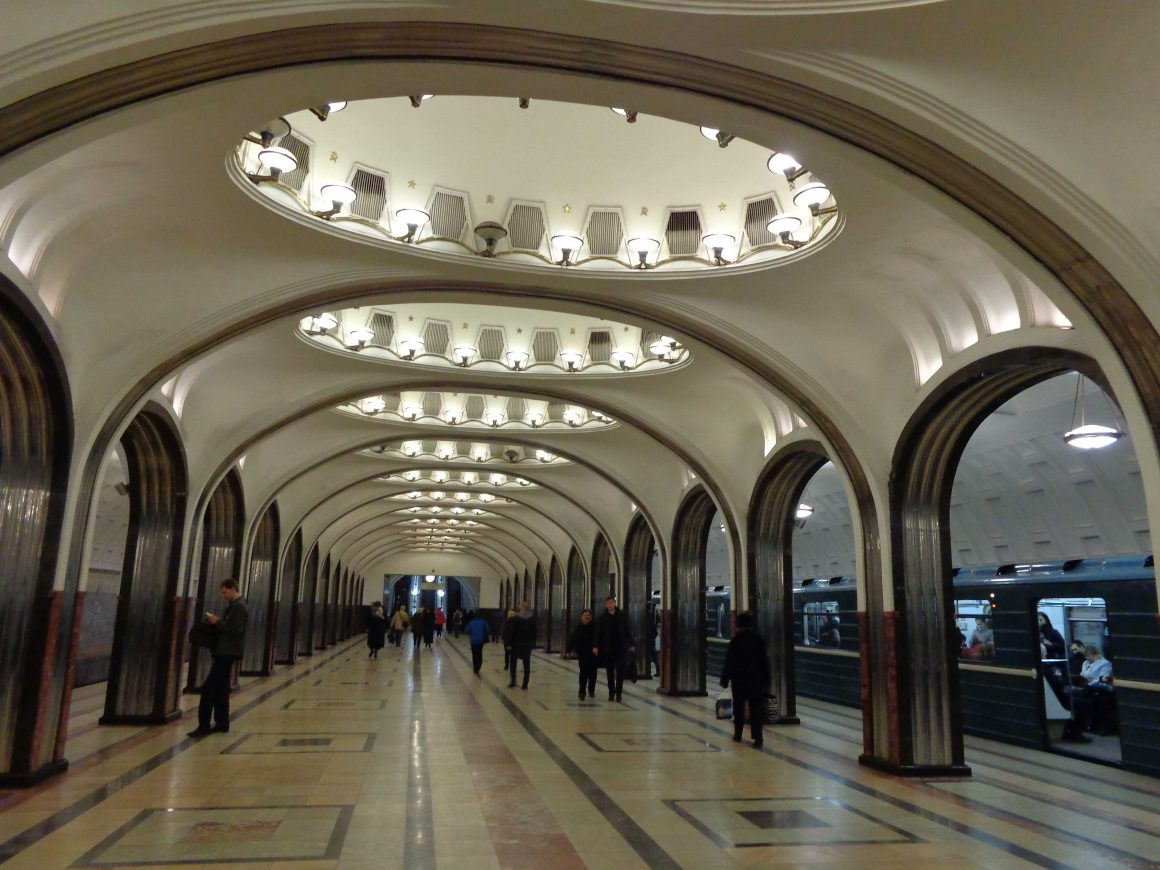 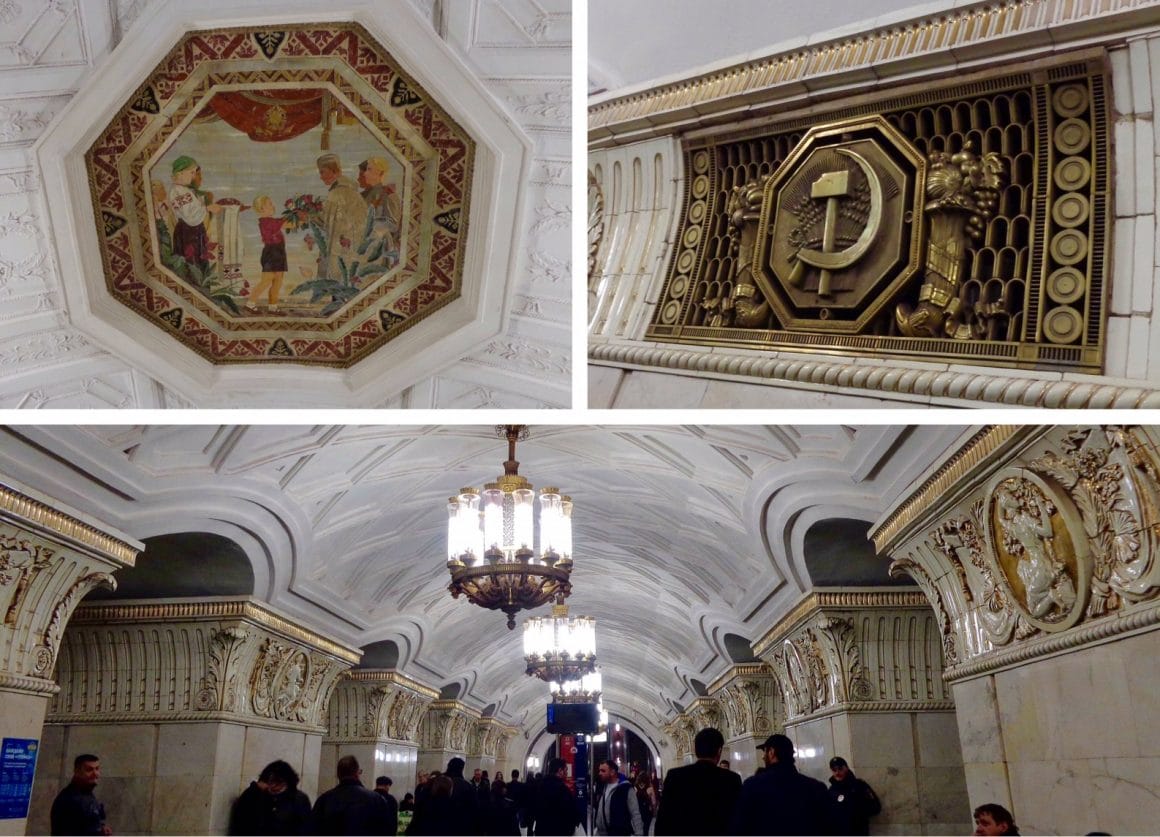 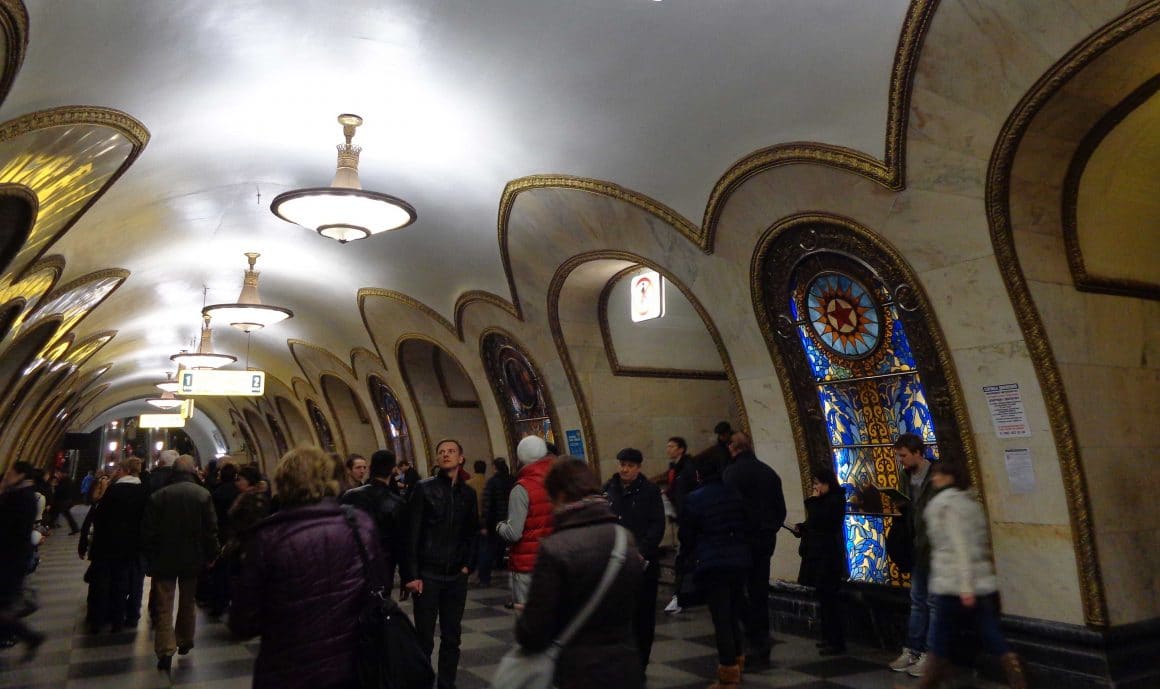 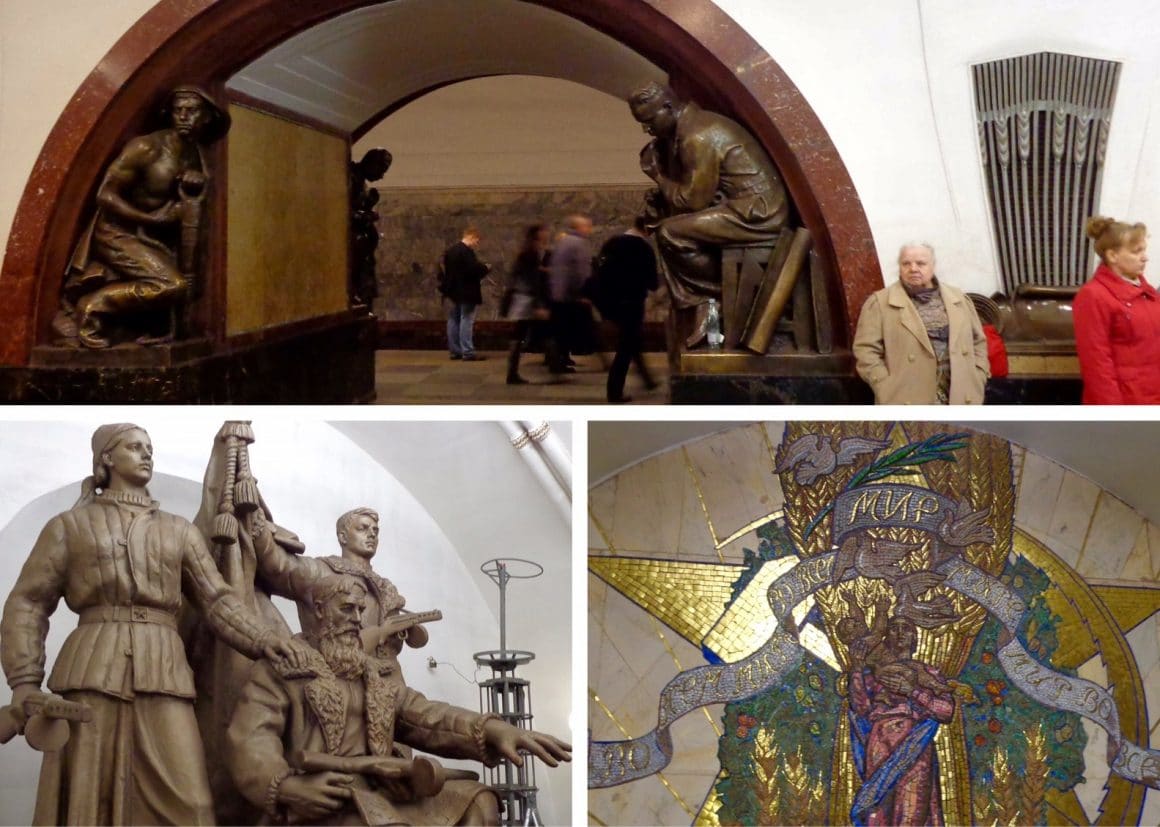 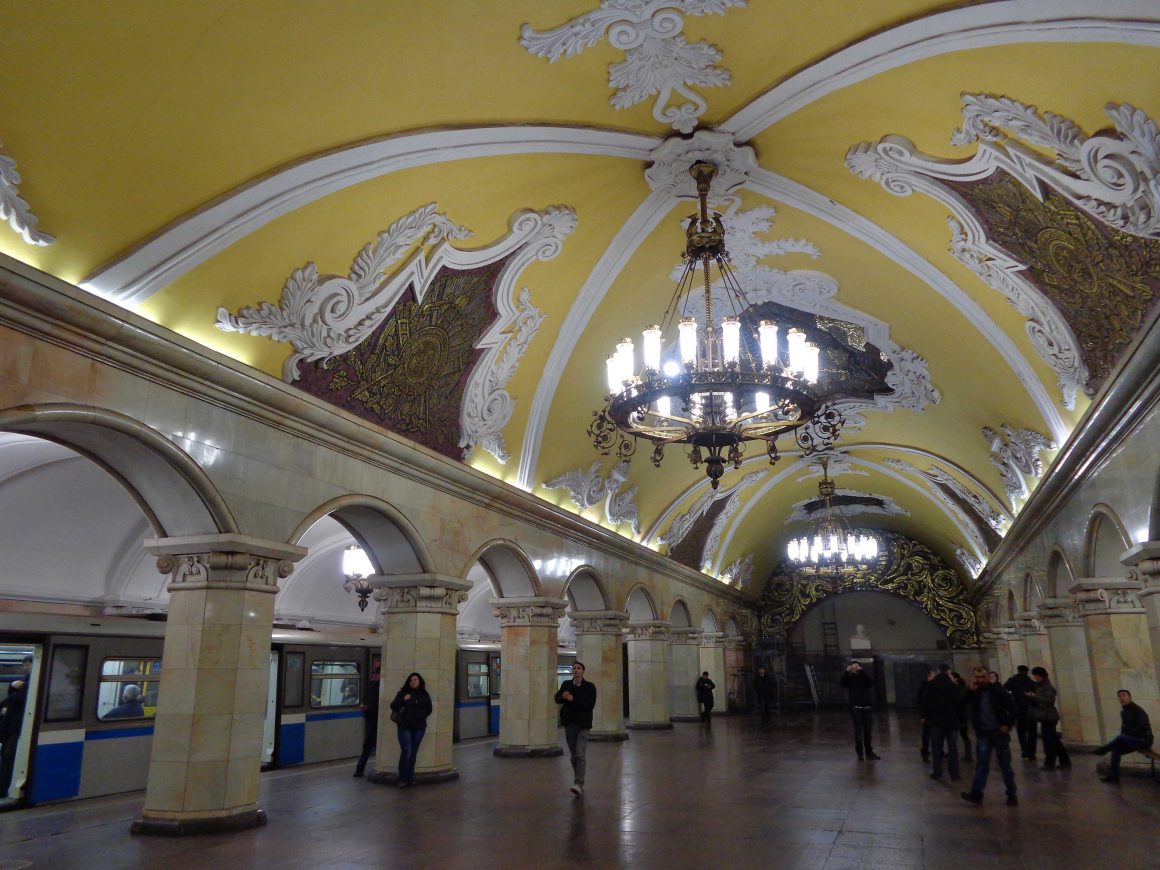 Have you visited these gems in Moscow? 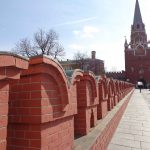 Moscow: 4 highlights you must see in the Russian capital 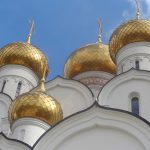 In pictures: Russia beyond Moscow