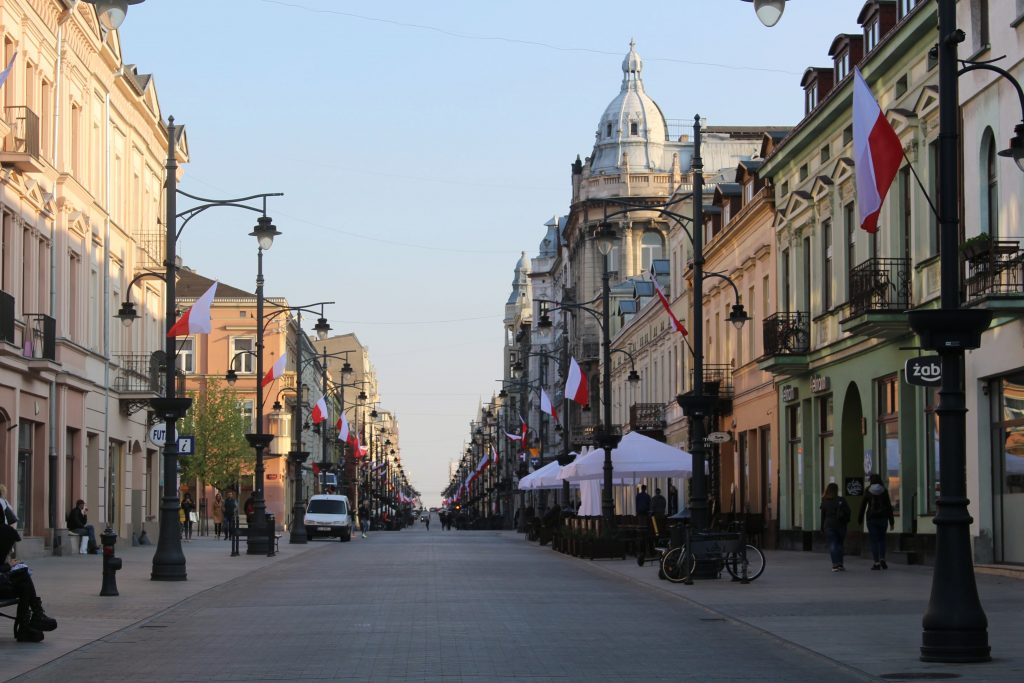 Paris, London, Rome: the well-known destinations for a weekend getaway. It feels like everyone has taken these city trips, including me. But honestly: the big touristy destinations are not for me. I often feel it is too crowded, too commercialized and too shallow. I get more joy out of cities that are less fixed on the radar of every tourist. The not-everyday destinations, places that are bit more on the rough side but full with character. Our overland trip from the Netherlands to Indonesia (the first part covered Central and Eastern Europa) was a great moment to tick off a few unknown gems in Europe. One of our first stops was the city of Łódź in Poland. You probably have never heard of it, but I am sure this is going to change in the coming years. Łódź is blooming at the moment. Let me show you why this Polish city is worth taking a city trip to.

Let’s start off by correcting the mistake that every tourist makes when visiting Łódź: the name of the city. This is pronounced a little bit different than you would think. The l is pronounced as a w, the o is pronounced as an oo and the dz is pronounced as dge. Don’t be ashamed if your pronunciation sucks. I also struggled a lot with it. In fact, the Polish language is one of the most difficult languages in Europe.

The ugly duck of Poland?

When I told a Polish former colleague that I was planning to travel to Łódź during my big overland trip, she didn’t understand why. Łódź is a dull grey city, there is nothing to see, said my colleague. Yes, Łódź had a pretty negative image. It used to be a major textile city in the former Russian empire, but the wars of the twentieth century had a devasting effect on the Polish textile industry. The industry collapsed and the factories stood around as empty shells. This is the image that most people remember of Łódź. But that is not the end of the story, because Łódź kept on going. It reinvented itself, thanks to the city students. A prestigious film academy, music school and art academy opened its doors. Art (in particular film) gave the city a second life. If you ask me, it is a golden combination with the empty factories as a stage.

So, is Łódź the ugly duck of Poland? My answer: no. Łódź might not be a pretty city as Krakow or Poznan, but it is a city with character. It has everything to offer for a perfect city trip. And the best part: no tourist groups. I definitely see good chances for Łódź welcoming more tourists in the future, but at the same time I hope that the city stays as authentic as it is now.

What to do in Łódź?

That’s the background story of Łódź. Now the important stuff: what can you do and see in Łódź? I am sharing my six tips and recommendations.

Manufaktura, around the corner of our hostel and therefore a good starting point for our city trip. This used to be one of the largest weaving and spinning mills in Łódź, but just like the other factories it fell into disrepair. The complex is now renovated into a large shopping and entertainment center. But, if you look at it from distance, it still looks like a factory due the red brick stones. Kudos to the new owners and the way they have tried to keep the old identity. Visitors will enter through the Poznanski gate where the construction workers also used to enter. The first thing you see is a large square. We visited Manufaktura in May and we barely saw the sun. But when the sun was out, this square instantly came to life. Locals looked for a good spot on the terrace and children were having fun with the water sprinklers. Sun or no sun, Manufaktura is a perfect place to sit down and ‘watch people’ with a cup of a coffee or a snack.

2. Łódź at its prettiest: Ulica Piotrkowska

The avenue where it is all about in Łódź: Ulica Piotrkowska. If you want to see the pretty side of Łódź, this is the place. I am all in favor of car-free boulevards, a place for the roaming photographer like myself. And Ulica Piotrkowska is not just an ordinary street. It is in fact the longest street of Europa. Four kilometers just for pedestrians. Bicycles are allowed though, so I recommend still checking the street when you want to cross. At Ulica Piotrkowska you will find Łódź at its prettiest. The street runs from Freedom Square (Plac Wolnosci) to Independence Square (Plac Niepodleglosci). On both sides of the street you can see beautiful historical and industrial houses in neo-rennaisance and Art Nouveau style. So do not forgot to look up!

Łódź is the city of art and you can also clearly see this at Ulica Piotrkowska. Take for instance the bronze statues of city heroes and walk across the Walk of Fame (of Łódź). On the star-shaped tiles you see the names of important actors and film directors. My tip: don’t just visit this street once, but come back a few times. Take a left or right and head into the side streets. Every time I did this, I saw something new!

3. Hipster factories of Łódź: OFF Piotrkowska

All those empty textile factories in Łódź are perfect breeding grounds for creative hotspots. The most creative area is located in one of the side streets of Ulica Piotrkowska. Welcome to OFF Piotrkowska. Exactly as the name says: just off the Piotrkowska street. The old building here started out as a cotton mill, but is now renovated into a multifunctional creative center. Visitors can find here a soccer cafe, art galleries, a barbershop, restaurants and bars. To me, this place feels like the NDSM grounds in Amsterdam or Strijp-S in Eindhoven. I am a big fan of creative places. This is not the only hipster spot of Łódź. Just down the street there is another spot called Piotrkowska 217, dubbed as the second ‘Off’ by locals.

4. Hunt for hours (or days) for the best street art

Tip 1-3 are all good reasons to come to Łódź, but the main reason for me to come to Łódź was the massive amount of street art this city has to offer. I love street art and Łódź has been often named the street art capital of Poland. How come you ask? In 2009 the Urban Forms Gallery was founded, a local foundation in Łódź that promoted street art with the goal to improve the overall look of the city. The result: the city has more than 130 murals. You can spend a whole weekend soaking up all the street art there is to see here. And yes, I would have loved to have done this, but sadly I was not feeling too well when I was in Łódź. I had nasty cold after a rainy night in a soccer cafe (yes, that one in OFF Piotrkowska). The next day I still went on the hunt – with a big bag of tissues – and managed to still see quite a lot of murals. Most of them are located on the right and left side of the Ulica Piotrkowska. So that makes it easy! But I would love to come back and continue my hunt (without the cold).

There are so many murals you can see in Łódź, but these were my favorites:

How to find street art: download the map of the tourism agency of Łódź and go on a Do It Yourself street art hunt.

With all that walking you probably get hungry at some point. Luckily Łódź has a great café culture where you can eat delicious food. You might not expect it, but Poland is a super easy country for vegetarians and vegans. I never had any trouble finding a restaurant and for a quick bite I found that Zabka (a Polish convenience store chain) had always something to offer.

Here are my favorite restaurants:

How to find vegetarian or vegan restaurants in Łódź: I always use Happy Cow or Foursquare.

Besides industrial heritage Łódź also has another side to offer: the one of beautiful architecture. The factory directors also had to live somewhere, and they often built the most beautiful villas and palaces. Undoubtedly, the most beautiful palace is the Izrael Poznanski palace, home to the director of the former spinning mill in Manufaktura. Unfortunately, I only saw the palace briefly from the outside as I was on my way to something else. A good reason to return someday to properly explore the palace.

Besides palaces I also ran into some beautiful churches. Take for instance the beautiful Alexander Nevsky Cathedral and the Holy Trinity Church in three colors: grey, yellow and white.

Attention to modern architecture enthusiasts: also in Łódź there is something for you. Head over to the EC1, a former power plant transformed into an interactive science center. It looked so cool from the outside! Also the buildings surrounding the EC1 were part of the transformation project, like the Łódź Fabryczna train station. Today, it is the most modern train station of Poland. It is absurdly large for the few trains that arrive and depart here every day.

Would you visit Łódź? 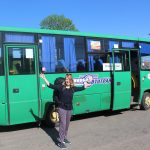 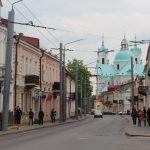 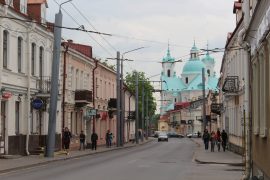 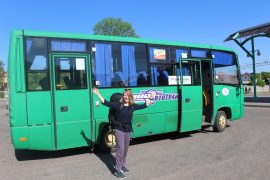 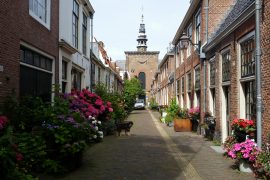 What to see, eat and do in Haarlem: a personal city guide