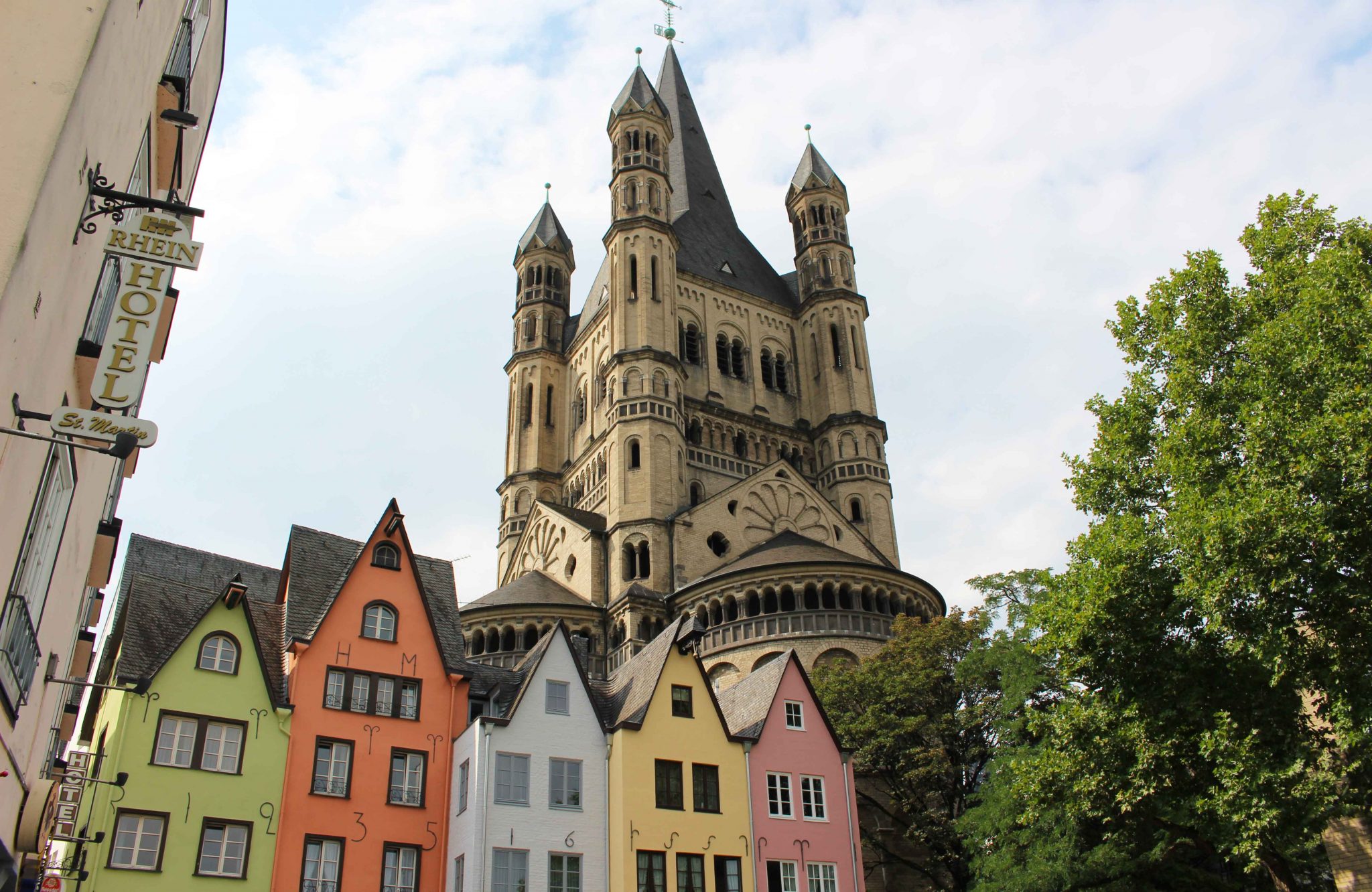 Cologne revisited: a day trip to the German Rhine city

I visited Cologne for the first time in December 2013. I went for a day trip to the Christmas market and I ate my way around fruit sticks dipped in chocolate, glühwein and lebkuchenherzen. It was a fine day, but honestly I did not love Cologne right away. Visiting Cologne is December was not the smartest idea. It was cold, grey and chilly. Despite the Christmas market at the Dom I did not explore much of the city. I didn’t had the feeling there was much to see to begin with. The Hohenzollern bridge with the sweetcolored love locks, the gigantic Dom church, but what more was there to see? Last summer I decided to give Cologne a second chance. I got excited reading a couple of blogs about is. And it turns out: the second attempt was successful. I saw Cologne in a whole new light and I liked the city! Curious what I did in my second 24 hours in Cologne. Just keep on reading!

Interested in reading about my first visit to Cologne: Cologne in one day, what to do?

One of the main reasons why I did like Cologne the second time around, was because of the funky neighbourhood Ehrenfeld. This area is raw, alternative and has a lot of street art. At nearly every corner there are a couple of work to see, from small paste ups to big murals. The fun already began at station Ehrenfeld, the point where we arrived. On the walls around the railway viaduct there are extensive paintings spread out over the walls. You could just walk along these walls and see already so much great works. This already impressed me. With the app rel=”nofollow noopener” street art we decided to look up more street art in Ehrenfeld. We followed a route of 4 kilometer and walked past 17 paintings. One of the definite highlights was the clear cut hare of ROA, but also the colorful painting of Inti on the Vogelsangerstraat also made a big impression on me. A couple of years ago I saw a mural of Inti in Heerlen (NL). The colors really pop out of his works. I also saw a brand new painting in the making from the Ukrainian artist AEC Interesni Kazki, the result of the yearly CityLeaks Festival. Ehrenfeld feels like a living museum. The creativity just continues and every few months new works are added to the collection. 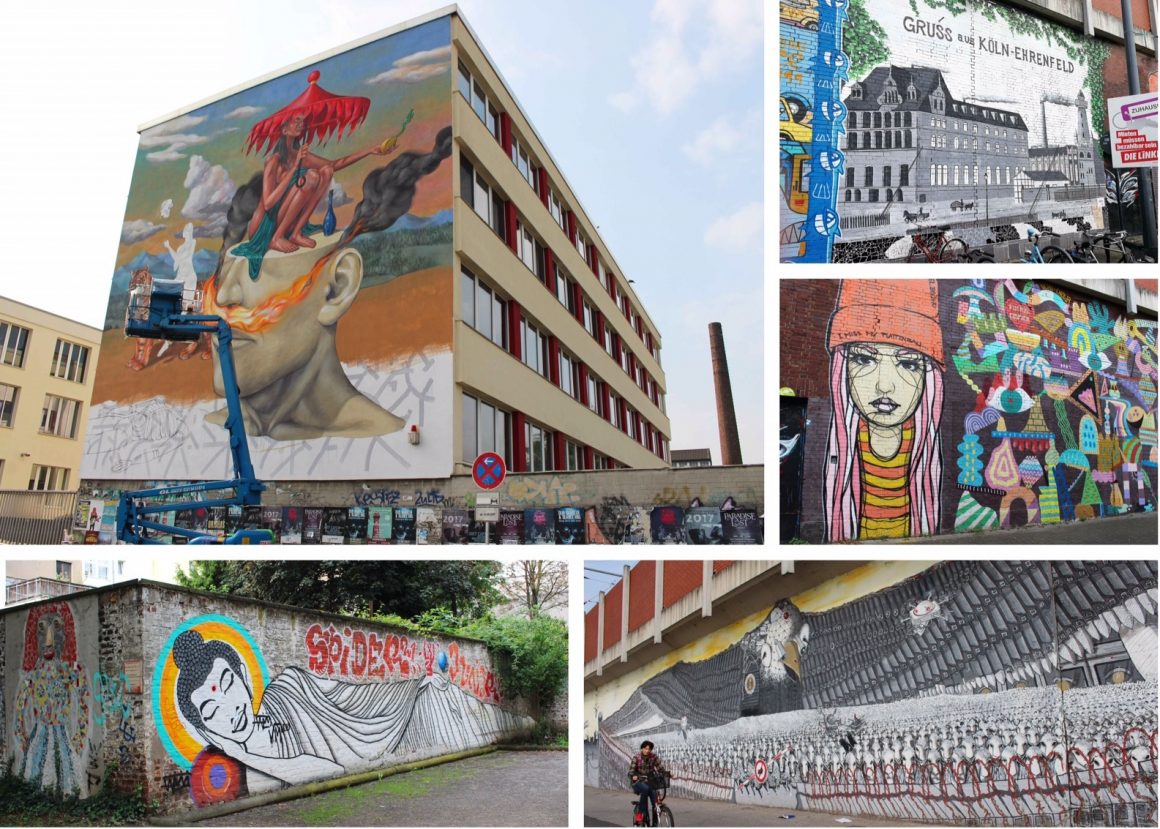 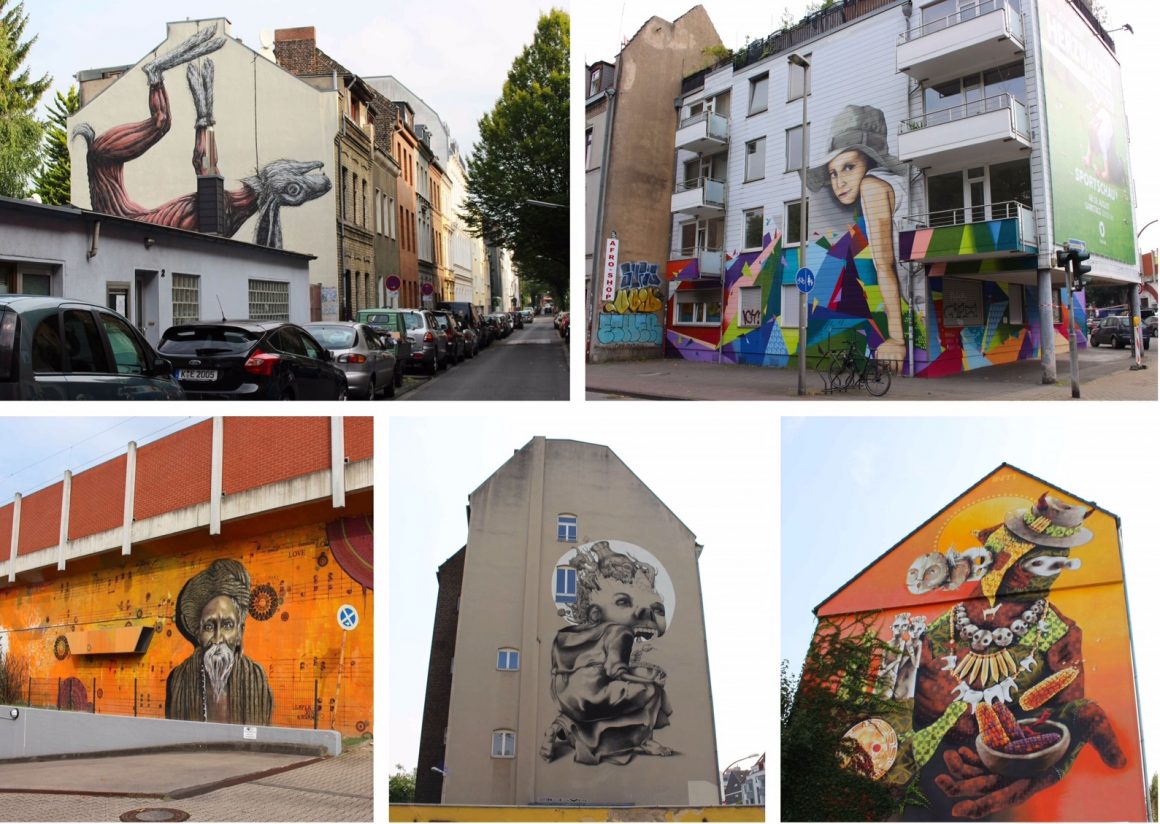 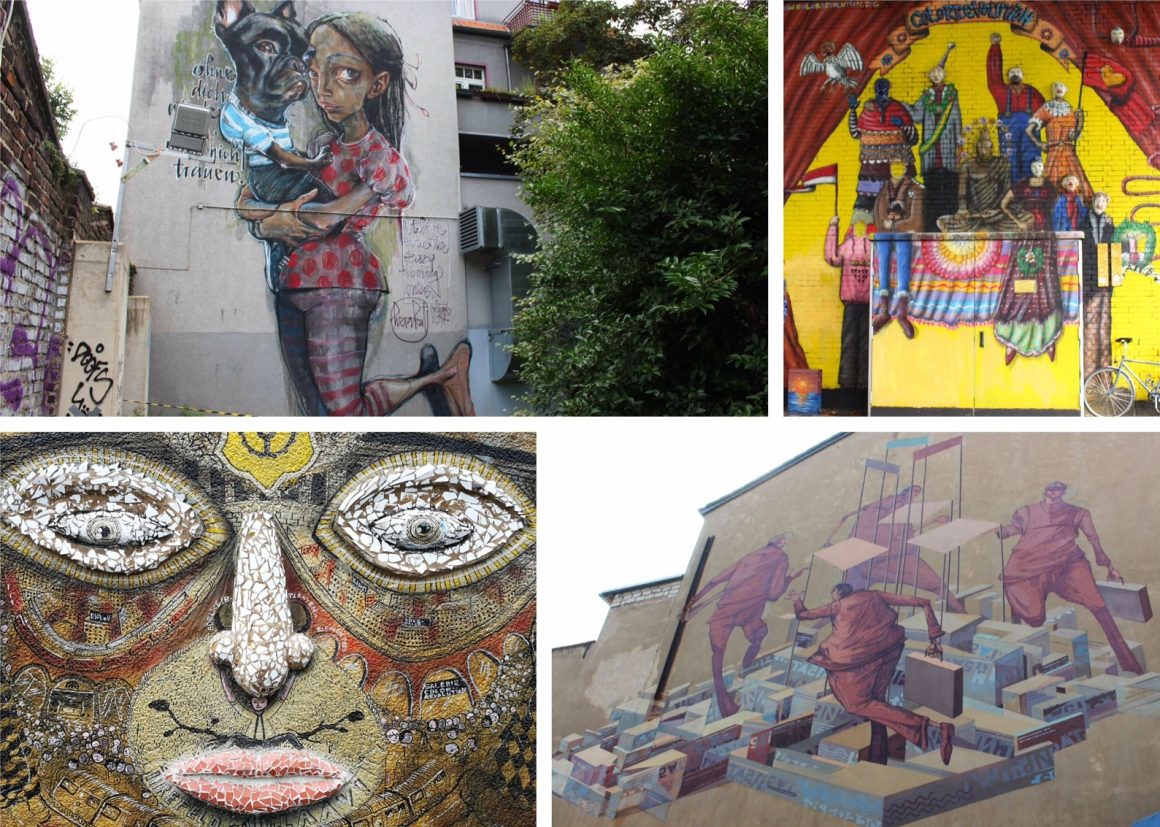 Ehrenfeld is not only a great place for street art, you can also find some lovely cafes here. I went for lunch to Cafe Rotkelchen. This cafe, with a beautiful mosaic floor, is a good spot for a cup of coffee and vegetarian breakfast or lunch. And if you like sweet things, they also have a great selection of cakes and pies. But also in the city center of Cologne there are plenty of great café. Are you in the mood for savoury snack? Then I can really recommend going to hotdog bar Bad Ape. Also vegetarians are welcome here. I enjoyed a ‘bad sandwich, a soft hot dog bun with warm sweet potato, aioli, almonds and arugula. There is not a lot of sitting space here, so be sure to avoid the busy noon period. I ended my day with burgers at Hans im Glück at the Hohenzollernring. This is actually a chain restaurant you will come across in several German cities. Hans im Glück is a good place for vegetarians, because they have a lot of vegetarian and vegan options on the menu. 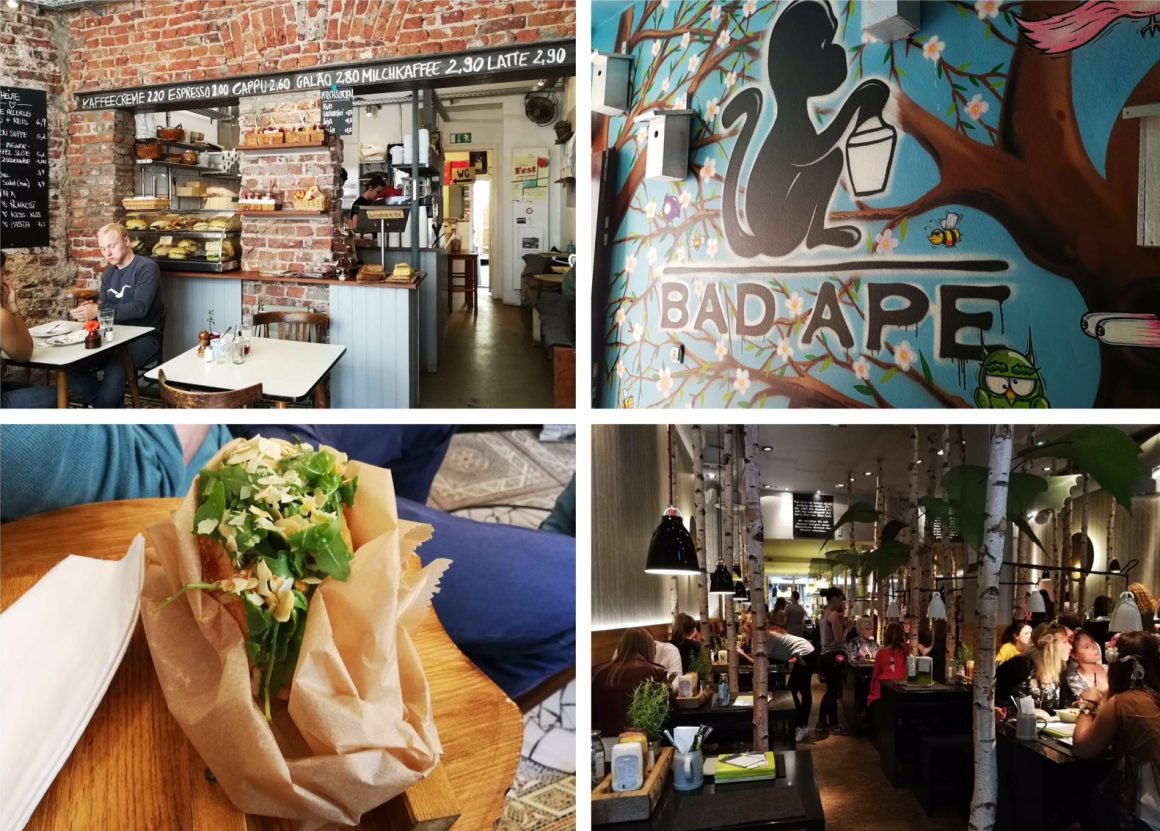 Walking through the colorful Altstadt

Whereas the previous visit to Cologne was mainly focused on the Christmas market at the Dom, this time I also explored the Altstadt (Old Town). I walked past the banks of the Rhine and loved looking at the colorful houses with the Great Saint Martin Church in the background. On a beautiful summer day the terraces are filled with tourists enjoying their big glasses of beer. The cobblestone streets in the Altstadt are very charming, but at the same time it lacks in atmosphere and authenticity. Good to know: Cologne is a popular destination for bachelor parties and that is reflected in the large groups of men and women walking around. 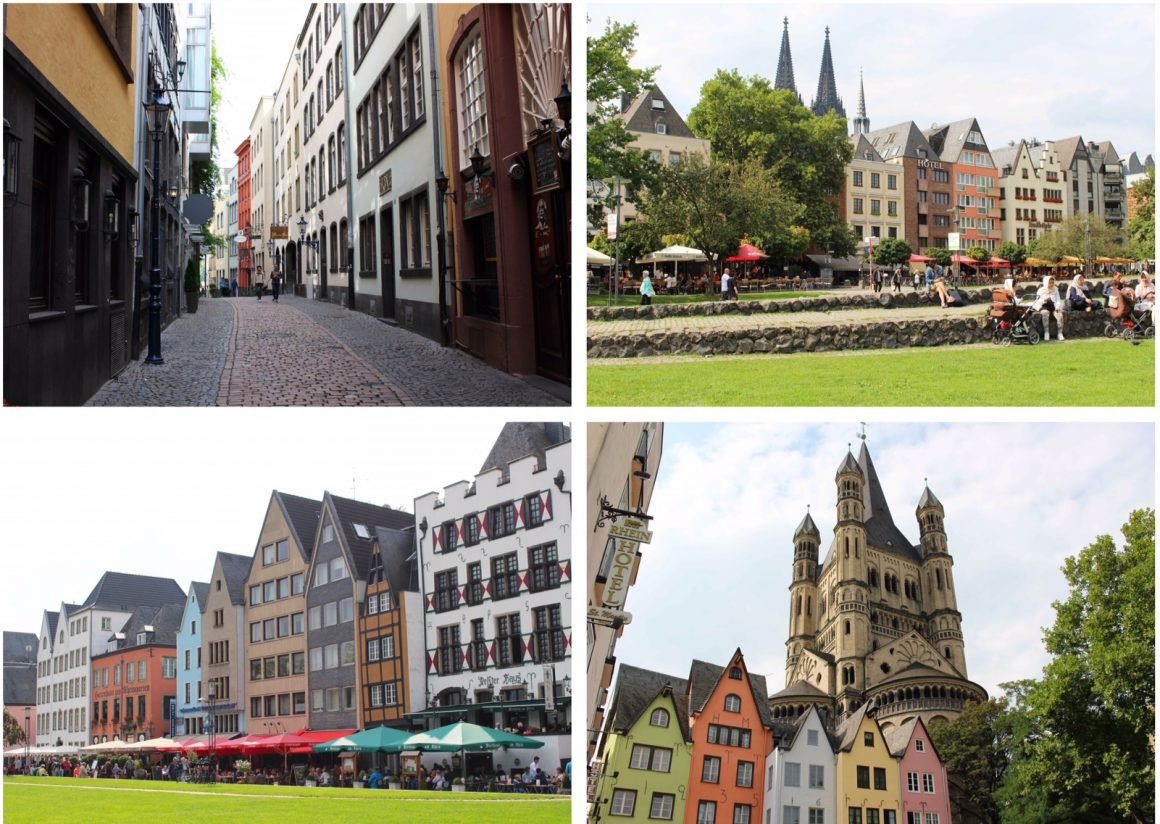 Cologne: the city of 12 Romanesque churches

In the city center of Cologne you will come across many churches. This has a reason: the downtown area has 12 Romanesque churches. The medieval architectural style can be recognized by the thick walls, spire towers and small semi-circular windows. Also the Great Saint Martin Church in the Alstadt belongs to this collection. We decided to take a trip down memory lane and visit the Saint Gereon church. In 2013 we came across this church more of less by chance and we were fascinated with the giant head laying the park in front of the church. Then we had no idea why it was there. On the second visit I did. The head is commemoration of the Roman soldier Saint Gereon. According to legend this soldier came with a legion to Cologne where he suffered a martyr’s death. The Roman emperor had given orders to execute the entire legion because they had converted to Christianity. In memory of St. Gereon this church was built.

A look inside the Kölner Dom

The true eye catcher of Cologne is the massive Cologne Cathedral, also called the Kölner Dom. This gothic church is, with the two 157 meter high towers, the biggest cathedral in Germany. During the previous visit I had already seen the Dom, but because of the chilly weather I was not paying attention to the details of the building. The second time around the sky was perfect blue. I could clearly see the change of colors on the towers, from the new restored part to the blackened areas. Climate change has its effect on the church. This time I also visited the church from the inside. I did not climb the 509 steps or visit the treasure chamber, but I did enjoy the day light coming through the high colorful stained glass windows. Beautiful! 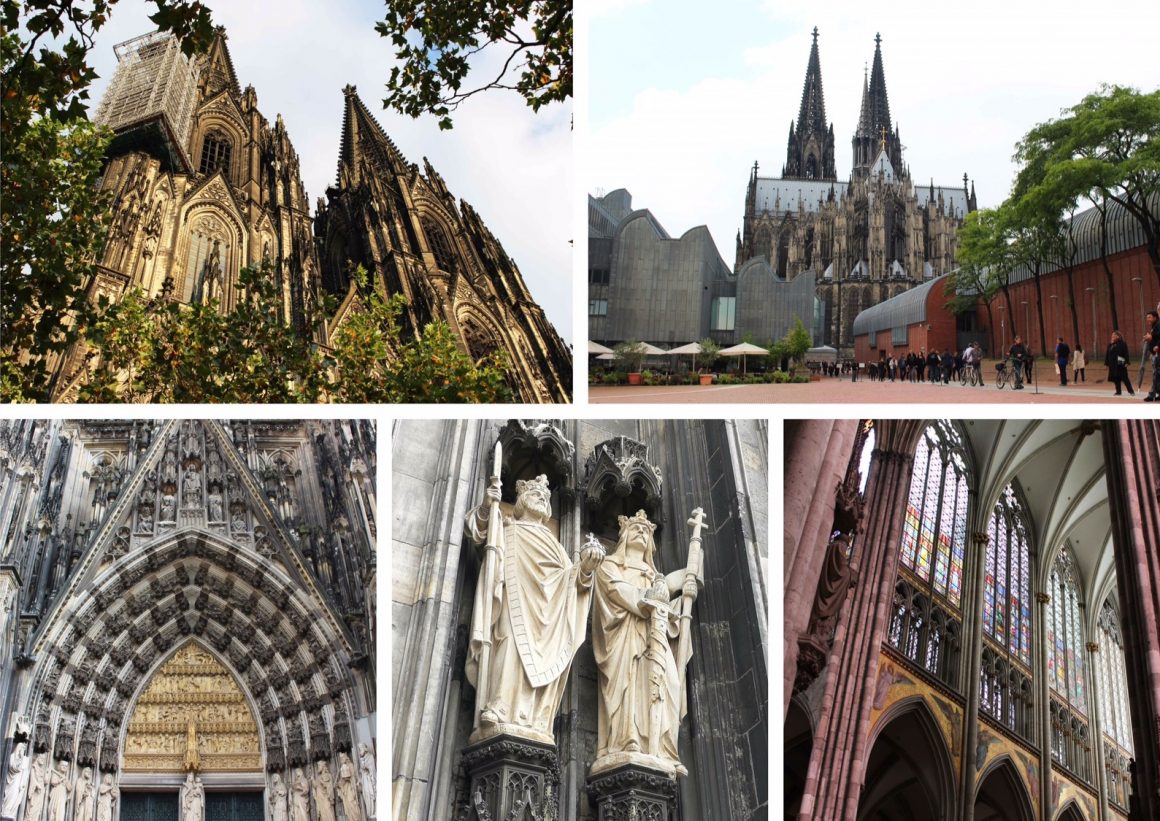 Have you ever given a destination a second chance? 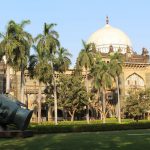 Mumbai: 10 great things to do in India’s biggest city 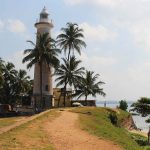