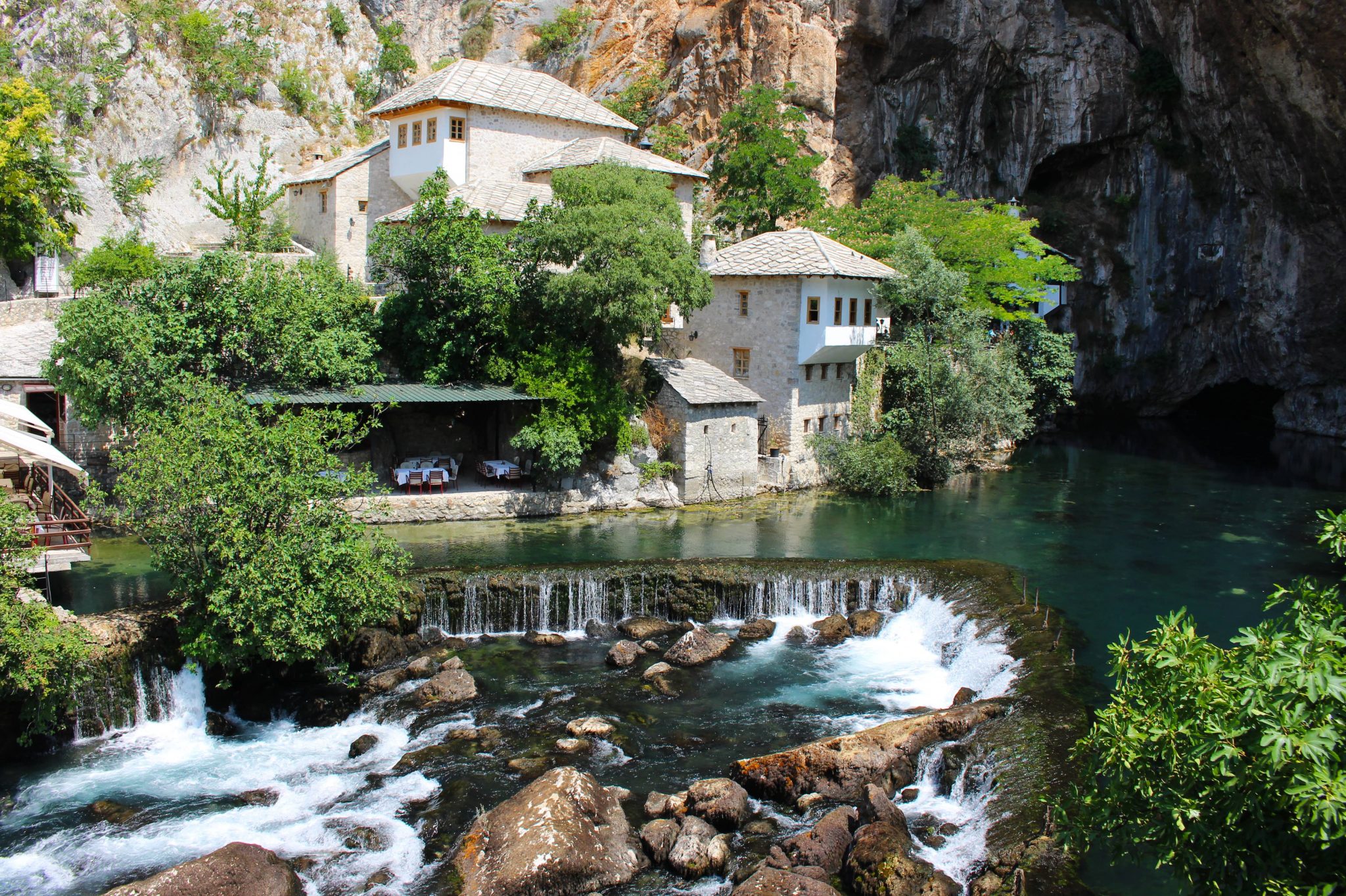 In Bosnia and Herzegovina

Bosnia and Herzegovina: 10 things to do in and around Mostar

Bosnia and Herzegovina is a great travel destination. My trip to this country was my first visit to the Balkan, and I immediately fell in love with the region. My boyfriend and I first visited Tuzla, then the capital city Sarajevo, and our final stop was the historical town of Mostar in the region of Herzegovina. Many tourists we spoke to visited Mostar during a day trip from Croatia. Personally, I think a day trip to Mostar doesn’t do the city justice. There are plenty of things to do in and around Mostar. In this blog post, I am sharing 10 things to do in and around Mostar.

10 great things to do in and around Mostar

1. Watching the bridge jumpers at the Stari Most

Jumping off the historical bridge Stari Most is a hazing ritual for young local Bosnian boys. According to tradition, successful adult life can only start after the 20-meter high jump. However, this jump is not without danger. The water of the Neretva river is cold and there are many rocks at the bottom. Moreover, the wind speed under the bridge can easily bring the jumper out of balance. Yet the tradition continues up to this day. To show tourists what it looks like, during peak season every hour an experienced jumper jumps off the bridge. Of course, they don’t do this for free. If the total amount of €25 is collected, they jump.

The Stari Most is a special bridge. This stone arch bridge is deeply linked to Mostar. In the sixteenth century, the Ottomans built this bridge, and shortly afterward the first boys started jumping off the bridge. During the war, the bridge was blown up in 1993. Ten years later, the restoration started with the help of international donations. In 2004, the city celebrated when version 2.0 was opened and the two parts of Mostar were connected again.

2. Look for the brother of Stari Most: Kriva Cuprija

The name Stari Most (translation: old bridge) suggests that this is the oldest bridge in Mostar, but that is not true. This honor goes to the Kriva Cuprija, a small arch bridge built eight years before the Stari Most. According to the old stories, this bridge was a trial to test whether such a construction was possible. In contrast to the summer crowds at the Stari Most, at the Kriva Cuprija it is nice and quiet. Moreover, the small bridge looks beautiful in the midst of historic buildings and cobblestone streets.

Mostar’s roots can be traced back to the Ottoman Empire. This city was founded in the 13th century and in the following seven centuries the city flourished under the Ottomans. It was an important trade hub in the region. On both sides of the Stari Most, you will find the čaršija, the old craft & trade center of medieval Mostar. Today, it is a market street with tourist shops that offer Turkish tea and oriental lamps. The whole area feels more like a bazaar in Turkey than a market in Bosnia.  Walking down the old pebble stone streets is not super comfortable, especially walking downhill. Some parts can be quite slippery!

4. Climb the minaret of the Koski Mehmed Pasha Mosque

Mostar’s east side is the Bosnian side and you will see many mosques here. One of the most prominent mosques is the Koski Mehmed Pasha Mosque. It was built in 1613, but the mosque was partly destroyed during the war in the nineties. What you see now is a copy. You can reach the entrance through a courtyard near the Tepa Market. I highly recommend climbing the minaret. The mosque is situated on the banks of the Neretva river and from the top of the minaret, you will have a stunning view over the historical center, the Stari Most, and the river. Not a fan of small confined spaces? Then the climb up the 89 steps of the minaret will be a challenge for you. Luckily, at the top you will be rewarded with the most beautiful view of Mostar.

5. Walking along the Bulevar Revolucije

Mostar has a macabre record on its name. It was the most bombed city during the Bosnian war. Therefore it is not surprising that you will still see many destroyed buildings in this city. Almost every wall shows bullet holes. You will see the most ruins around Bulevar Revolucije. This street was the frontline between the Bosnian and Croatian side, resulting in daily shelling and bombing. Offices, bank buildings, and apartments were turned into ruins. A prominent example is hotel Neretva, in the nineteenth century this was a beautiful hotel built by Austria-Hungary, nowadays there is only a forefront left.

Tip: join the free walking tour. The guide will show you old photographs of what the buildings looked like before the war.

In the middle of these war ruins, one striking building stands out: the orange-colored Gimnazija. This school was opened in 1898 at the time of the reign of Austria-Hungary. Its aim was to promote the Bosnian identity without clear Ottoman or Slavic ties. In 2009 the renovations were completed; the building was damaged during the war. Today the school has a symbolic location (on the former frontline), and it is the only school in Mostar where both Bosniak and Croat children go to school. Although it is often separated and with a different school schedule.

Looking for a great panoramic view over Mostar? Climb Hum Mountain. On top of this hill, you can clearly see the picturesque location of Mostar in a valley. We went up the mountain during a tour of Mostar Travel. The guide grew up in the war and shared a lot of personal stories with us. On the mountain, he told us that the Croatian troops used this hill to bomb the Bosnian side of Mostar. Bosnian locals were literally boxed in, on the one side by the Croatian district and on the other side by the Croats on the mountain. When walking around on the hill, we even found old shell casings. This reminded us that this all happened not too long ago.

7. Swim in the Kravica waterfalls

There are plenty of things to do in the area around Mostar. For example, go swimming in Kravica waterfall. Something we were really looking forward to. We visited Mostar in the hot July summer month! The Kravica waterfall is beautiful to see, but the water is icy cold and full of pebbles. Be careful when swimming in the water, because you can easily bump your knee or foot. Because there is height and water involved, the Bosnian jumping ritual also continued here. I am afraid of heights, so I skipped it. My boyfriend joined the Bosnians and jumped off one of the waterfalls. And he can still tell the story, so it was okay to do it.

8. Visit the Dervish monastery of Blagaj

One of the most fairy-tale sights of Bosnia and Herzegovina is only located 12 kilometers away from Mostar: Blagaj Tekija. A sixteenth-century monastery built during the Ottoman empire according to the Dervish culture. The monastery is very photogenic because of its location. It stands on a hill against a mountain, surrounded by the beautiful blue water of the Buna river. Unfortunately, I did not see the monastery from the inside. Maybe next time!

9. Spend a couple of hours in the fortified town Počitelj

Do you love visiting fortified cities? Do not miss out on the town of Počitelj. This medieval town was once, among other things, a military headquarters during Ottoman rule. Its strategic location on the border between Ottoman Herzegovina and Venetian Dalmatia was of extreme importance. Unfortunately, in the 19th century, the city lost its importance under Austria-Hungary and was severely damaged in the Bosnian war. In recent years, thanks to UNESCO and the national restoration and protection program, parts of Počitelj were restored. Počitelj is a gem to wander through. The best thing to do in Počitelj is to enjoy the view over the city from the Kula (fortress).

Tip: we visited the Kravica waterfalls, Blagaj and Pocitelj in one day during the Discover Herzegovina Day Tour of Mostar Travel. I absolutely loved this day tour.

The icing on the cake: street art. Yes, in Mostar you can find lots of that. From small pieces to big awesome murals. The amount of street art in Mostar keeps on growing, thanks to the annual street art festival. Many works concentrate on and around the Sniper building (the former bank building the snipers used for shooting during the war). This is a good place to start a search for street art in Mostar.

We stayed in a beautiful apartment, but I don’t think it’s up and running anymore. I couldn’t find it anymore on Booking.com. A good alternative is Dream Apartments, with a 9,8 rating on Booking.com. Looking for a hotel? Then Hotel Emen might be a good option. Click here for an overview of hotels in Mostar.

These are the top 10 things to do in and around Mostar. Would you like to visit Mostar? Do you have any tips for Mostar? 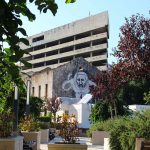 Where to find street art in Mostar, Bosnia and Herzegovina 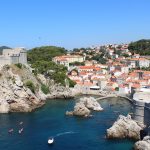 Visiting Dubrovnik in summer: how to avoid the crowds