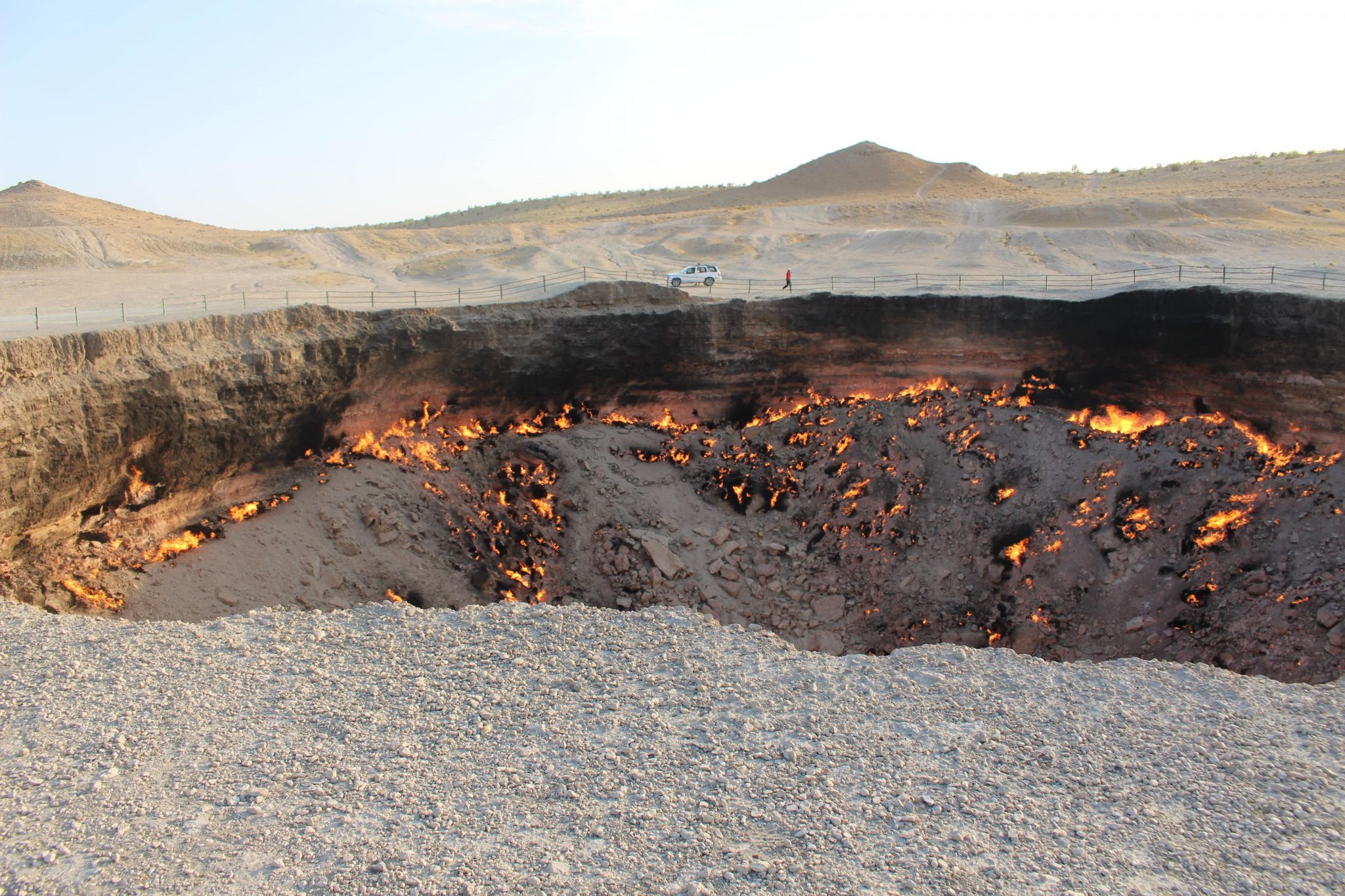 Darwaza crater in Turkmenistan: the weirdest sight I’ve ever visited

Turkmenistan is not everyone’s cup of tea. I get it, it is an odd, isolated place. Originally, this country was not even part of our overland itinerary. However, our plans were flexible and when the opportunity arose to apply for a 5-day Turkmenistan transit visa in Iran we decided to do it. Fortunately, our transit visa application got approved and the trip could begin. We filled the five days with two stops: Ashgabat and the burning Darwaza gas crater. In this blog post, I will tell you more about this hellish desert crater, how to get there and where to sleep.

The Turkmen Gate to Hell

The Darwaza gas crater is one of the weirdest sights in Central Asia, and perhaps in the entire world. It is a burning hole in the Turkmen Karakum desert with a width of 60 meters and a depth of 20 meters. Turkmen call it the ‘Door to Hell’, because the flames and the boiling mud seem to mark the entrance to hell. This flaming pit is the result of a drilling accident in 1971. The ground underneath a drilling tower collapsed and an underground gas cavern was exposed. To avoid the release of toxic methane gas, local geologists decided to burn off and neutralize poisonous gas. At first, they thought the fire would be out in a few weeks, but more than fifty years later the crater is still burning. When will it stop? No one knows.

Ashamed of the burning hole

The Turkmen government has been ashamed for many years of their country’s burning hole in the desert. In 2010, president Berdymukhammedov ordered the crater to be closed. This would have been better for the environment, but closing the hole is nearly impossible. Over the years, the president has gradually accepted the existence of the burning desert pit. His turnaround is also probably influenced by the growing international attention for Turkmenistan. Gradually over the years, more foreign tourists wanted to come to Turkmenistan just to see the Darwaza crater in real life. So, the president decided to declare the crater and the surrounding desert area a ‘nature reserve’. There was a fence installed to make sure that people don’t stand too close (and possibly stand on shaky crumbling ground).

You could say that the Turkmen government has a love-hate relationship with the crater. They are not happy with it, which is why I saw billboards promoting the pretty sights of Turkmenistan (like the ruins of Merv). On the other hand, they also know that the crater attracts a lot of attention and the president likes that. Take for example the odd scene in 2019 (one week before I visited the place) when the president drove laps around the crater in a rally car and tried to do some doughnuts. During that time, there were rumors that he had died and he wanted to show everyone that they were wrong.

Camping at the Darwaza crater

If you’re planning on visiting the Darwaza crater, I would definitely recommend staying for the night. During the dark hours, the flames look even more impressive. Around the crater (at a safe distance) you can find a couple of yurt camps. This is the only type of accommodation available near the crater. Basically, these are camps with large private yurts equipped with real beds and shared western toilets. It’s kind of a glamping experience. Please note that it’s impossible to book accommodations online in Turkmenistan. You just have to show up and ask for availability and price. Dinner and breakfast are often included in the price. We paid 40 USD for one night (Turkmenistan = expensive). You might have to bargain a bit because they started out at a much higher price. Another option is to bring your own tent.

Practical things to bring with you: snacks, water (or a bottle with a purifier), and toilet paper. There are no shops around. It’s a desert.

How to get to the Darwaza crater?

The Darwaza crater is located close to the main road from Ashgabat to Dashoguz. For transit visa holders the location is perfect for a 5-day north-south or south-north trip.

Traveling in August to the Darwaza crater? Then you will probably see a lot of Mongol Rally cars. We saw about 12 participants at the crater. It was really fun exchanging crazy travel stories!

Our hectic trip to the crater

Our plan was to take the train and we figured that buying tickets on the day of departure would not be a problem. It is Turkmenistan, how busy can things get? Turns out, pretty busy. The ticket office was packed with Turkmen eagerly trying to buy train tickets. That was the moment that we learned that our trip coincided with the annual Melon Day festival. Locals were trying to go home to celebrate this day with their family. After spending an hour in three different queues – in which I learned that Turkmen love jumping queues and office staff take their lunch breaks very seriously – we were told that all train tickets were sold out. Time for plan B: the bus. Unfortunately, at the bus station we were also told that all northbound buses were sold out. The only realistic option left was to take a regular taxi.

Luckily, the Kuwwat Hostel in Ashgabat helped us out and arranged a taxi. They took care of the negotiations (in Russian) and made a pretty sweet deal. For 700 manat (and a sausage sandwich, because the driver was getting his lunch) we were finally on our way to the Darwaza crater.

Getting out and going north

The train and bus are the best options for continuing to travel north. The train to Dashoguz leaves around 9 pm, the bus to Dashoguz leaves between 10.00 and 11.00 am. I would recommend choosing the bus, provided that you already bought your ticket (which we did not have because of freaking Melon Day). Buses heading north from Ashgabat are often full. Luckily, we met a guide for an Italian motor group tour and they were so nice to offer us a ride to Dashoguz. Not on the back of their motors, but in the follow car of their Turkmen guide.

And that was our adventure at Turkmenistan’s burning pit. So, would you want to visit the Darwaza gas crater? 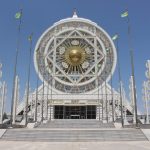 Things to do in Ashgabat: a bizarre guide for a bizarre city 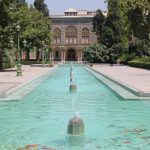 Tehran: a practical guide with 7 great things to do in the Iranian capital