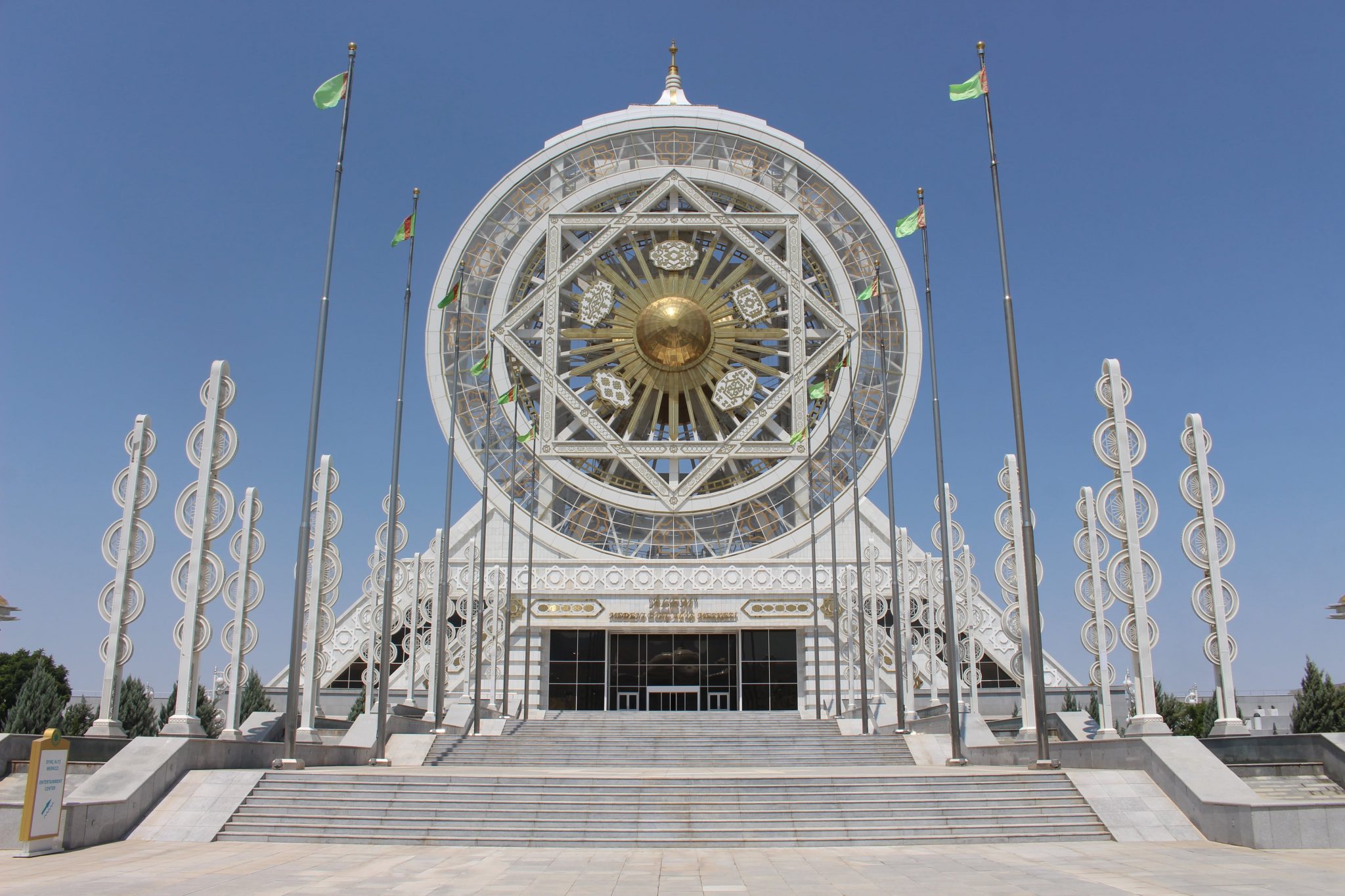 Things to do in Ashgabat: a bizarre guide for a bizarre city

Ashgabat, the capital of Turkmenistan, is a bizarre place to visit, which fits right up in my alley. It is one of the least visited capitals in the world, and that has everything to do with the strict visa policy of Turkmenistan. Apart from a few organized group tours, many of the foreigners visiting Turkmenistan are overlanders who arrive by cargo ship from Azerbaijan or cross the country on their way from Iran to Uzbekistan (we saw so many Mongol Rally participants). We fell into this last category and traveled from Iran to Turkmenistan. In this blog post, I am going to show you all the wonderful and weird things to do in Ashgabat. Plus, I am sharing a boatload of practical things to know. Grab a cup of tea, because it’s a long one!

Why is Ashgabat such an odd place?

The reason why Ashgabat looks so peculiar,  has everything to do with the first president of Turkmenistan. After the fall of the Soviet Union, Saparmurat Niyazov became president (1990). The man was obsessed with himself and having absolute power. In 1999, he named himself president for life and took on the title Türkmenbaşy (Father of all Turkmen). Niyazov was the one who started the transformation of Ashgabat. Due to the vast oil and gas wealth of Turkmenistan, he could literally built anything he wanted. So he said: bye-bye old Soviet structure, hello shiny marble palaces.

In 2006, the grand Türkmenbaşy passed away and was succeeded by Gurbanguly Berdymukhamedov. It’s a hell of a long name, but the only thing you need to know about this guy is that he’s a dictator with a weird obsession for horses. In particular the local Akhal-Teke horse breed. Comedian John Oliver dedicated an entire episode to this guy on his show Last Week Tonight. Highly recommend watching it!

City of the dead?

Everything in Ashgabat is huge, white, and raises so many questions. The main one: why?? This city is sort of like Las Vegas meets Dubai, but then without casinos. Or people. The capital of Turkmenistan is eerily quiet. You will see some cars and buses passing by, but it’s not a lot. And there are people, but they’re mostly cleaners or the military. This is the reason why Ashgabat has been nicknamed ‘the city of the dead’.

Ashgabat things to do: the weird architecture route

Most tourists that visit Turkmenistan have a short visa, which means you probably have to rush through Ashgabat. To help you out, I created a route of the best weird architectural highlights in the city. This is the exact route we took. Also check out the map at the end of this blog post with more things to do and see in Ashgabat.

Start at the Wedding Palace. Officially, this building is called the ‘Palace of Happiness’. The shape kind of looks like a wedding cake. On top of the building, there is a gold-colored disco ball with the contours of Turkmenistan on it. The ball is surrounded by a grid with an 8-pointed star in every wind direction. This is not just some random star, because it refers to the star of the national hero Oghuz Khan. This guy is known throughout the region as the Father of the Turkic people. The star and Oghuz Khan can also be seen on the 100 Turkmen manat banknote. Close to the wedding palace, there’s also a second significant building worth checking out: the Yyldyz hotel. Spending a night here will cost you 225 USD per night.

How to get here: the Wedding Palace is quite far from other places. The best thing you could do is to take a taxi to get here (price: 10 – 20 TMT).

The next stop is the Alem Cultural and Entertainment Center, a game hall for families. It’s free to go inside, so I recommend taking a look (+ free toilet). The place is probably deserted, just like everything in Ashgabat. We only saw one family walking around. But obviously, you don’t come here to play a game, you come here to see the giant Ferris wheel on top of the center. Its size resulted in a spot in the Guinness Book of Records for the largest indoor Ferris wheel. This is not the only Guinness record of Ashgabat. There are three more: the largest concentration of marble, the largest number of fountains in a public space, and the largest star-shaped building.

Near the Ferris wheel, you can also take a look at the Constitution Monument. This is the second tallest building in Turkmenistan. It is built to commemorate the 20th anniversary of the constitution.

How to get here: take the bus from Yyldyz hotel to go downtown and get out as soon as you see the Ferris wheel. Maybe show a picture of the building so the driver knows where you’re going. A bus ticket costs 0,50 manat per person.

3. Arch (or rocket) of Neutrality

Did you know that Turkmenistan is the only official neutral country in the world? During a UN meeting in 1995 president Niyazov announced that his country would be permanent neutral and all 185 UN members voted in favor. To commemorate this moment, Niyazov built a 75-meter high Arch of Neutrality. Locals call it the ‘tripod’, but I thought it looked more like a rocket (so not so neutral). On top of the rocket, there’s a golden statue of the man himself, Türkmenbaşy. Of course.

How to get here: it is possible to take the bus, but you have to do a better job than us. We missed our stop and ended up far away from the rocket. So, here’s my tip: get on a bus from Arcabil Sayoly and get out immediately after the bus turns right to Bitaraplyk Sayoly. Then walk to the rocket. An easier option is a taxi.

End the day at Independence Park. Be warned: it is gigantic and the paths are not always clear, so the best option is to walk around it. Bring plenty of water and a hat to avoid melting in the Ashgabat heat. This park has so many crazy gold and black statues to check out, plus you have the Independence Monument and the National Library to see. Both are huge, but what isn’t in Ashgabat?

How to get here: the best way is taking a taxi. Again, show a picture to let the driver know where you want to go.

Ruhnama is the holiest book of Turkmenistan and is written by the first president of Turkmenistan. It serves as a moral guide for Turkmenistan, its people, and most importantly the Turkmen soul. Ruhnama means the ‘book of the soul’. This spiritual book is a weird combination of made-up history, religion, and moral guidelines. It was mandatory reading material on schools and universities. People were tested on Ruhnama topics during driving exams and job interviews. Under the current president, the book is still important, but it’s not compulsory literature anymore.

At Independence Park, you can find a gigantic version of the Ruhnama. If you thought seeing this weird book monument is already ridiculous, then wait until you hear this. Supposedly the monument comes alive every evening at 8 pm. The book opens up and a passage is read out loud. Unfortunately, I have not seen this for myself.

How to get here: you’re already in the park, so walk to the Ruhnama monument.

Do you have some time left? Check out the Olympic Stadium, take a look at Ruyyet Palace, or visit the Türkmenbaşy Ruhy Mosque. Or head into the city hills and visit the star-shaped TV tower or complete the ‘Walk of Health’. Use the map below to plan your route of best things to do in Ashgabat.

Things you need to know before visiting Ashgabat

Hotels are crazy expensive in Ashgabat. A hotel room can easily cost you 80 to 160 USD per night. Luckily, the city also has two hostels. We stayed at Kuwwat Hostel (Kemine Street 101), which offers ‘budget’ rooms. We paid 30 USD per night for a luxe room with a bathroom. The room was okay, but way too overpriced. However, the best thing about this place was the way the staff helped us out. Zara (not the owner, but a long-stay guest that speaks English) is a true legend. She helped us exchange USD to manats at the Russian bazaar, took us to her favorite pub, and arranged a taxi when all train tickets were sold out during the annual Melon Festival (yes, that’s a thing in Turkmenistan).

It’s not possible to book hotels online. You just have to show up and ask for a room. Click here for the Caravanistan forum where other budget options in Ashgabat are discussed. Tourists are often expected to pay cash in USD, so don’t exchange all your USD for manats.

Where to eat and drink?

Reading this blog post, you might think that Turkmenistan is stuck in a different time, but this doesn’t apply to the local cafe culture. Ashgabat has super hipster cafes. Close to Kuwwat Hostel, you have the Etaz Pub. Great place for a pizza and a beer. Other great places are the Panorama Cafe (top floor Altyn Asyr shopping center), Sha Coffee, Bazetti Coffee, and many more (check out the map). One thing you should know about the restaurants and cafes in Ashgabat: they have tinted windows and there’s no sign. This makes it quite impossible to recognize a cafe from the outside. I think this has something to do with alcohol sale and smoking. These are two things that are prohibited in Turkmenistan, so it’s sealed off from the public view. Be prepared to eat in smokey restaurants.

And there you have it, a guide with the best and weirdest things to do in Ashgabat. Would you visit this odd city? 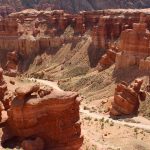 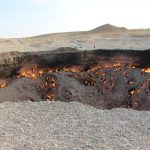 Darwaza crater in Turkmenistan: the weirdest sight I’ve ever visited