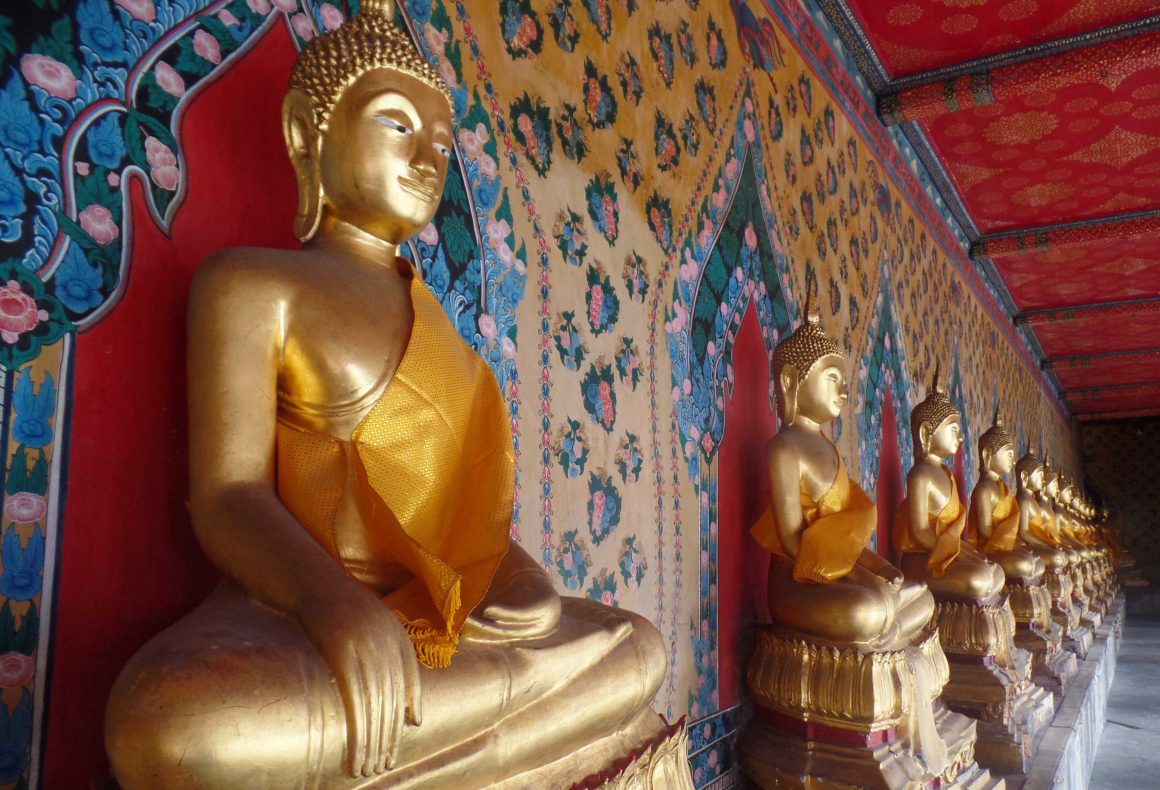 After the chaos of Bangkok it’s now time for some calmness, peace and beauty. Maybe you won’t believe it, but this is also something you can find in Bangkok. Just follow the smell of incense and the shuffling steps of the young monks and eventually you will end up at a ‘wat’, a Thai buddhist temple. For the Thai these are the refuges for prayer and self-reflection on the chaotic hot days.

You can recognise a Thai temple by a couple of things. First of all the stupas which you can find outside the temple. These are important shrines that hold relics. Secondly the ‘objects of luck’: incense, candles and lotus. You can find these items at the entrance of the temple on an altar. And last but not least, the buddha sculptures.  In the center of the temple there usually stands a big gold buddha scuplture. Okay scratch that,  sits a buddha sculpture. The legs are crossed in a tailor sit. Next to the ‘central buddha’ there is a smaller buddha  sculpture, covered with gold foils for luck, prosperity or respect. 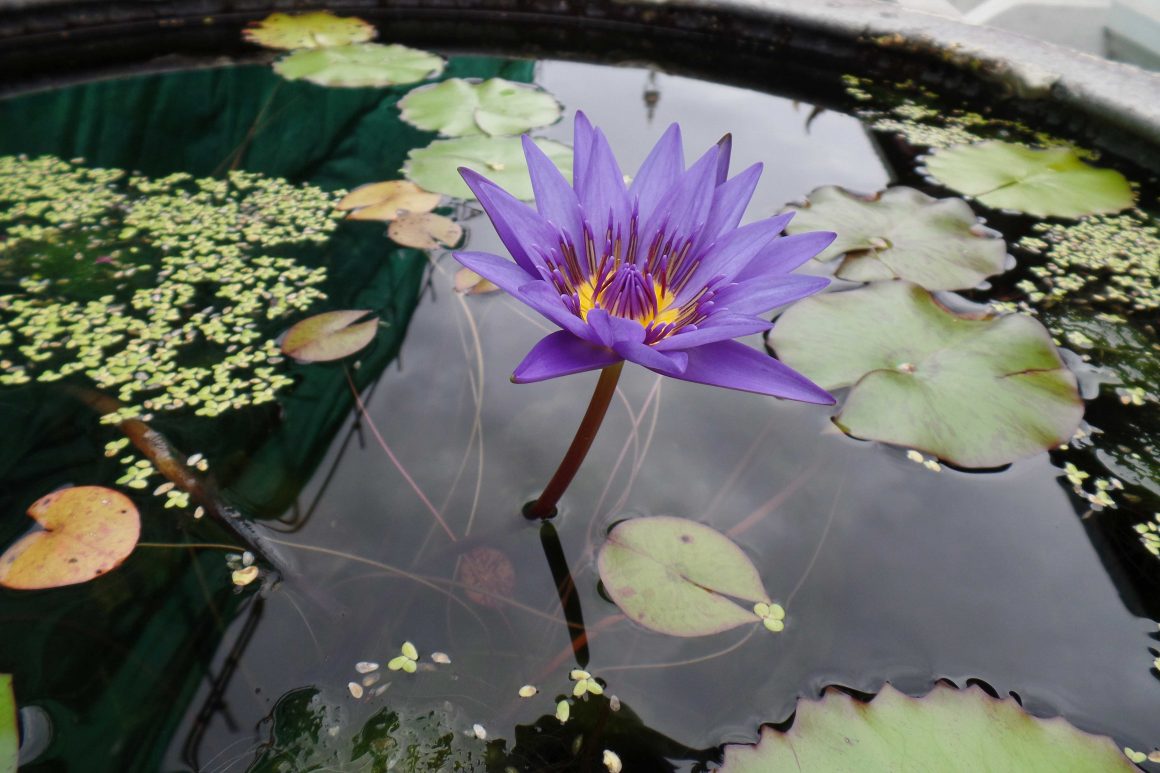 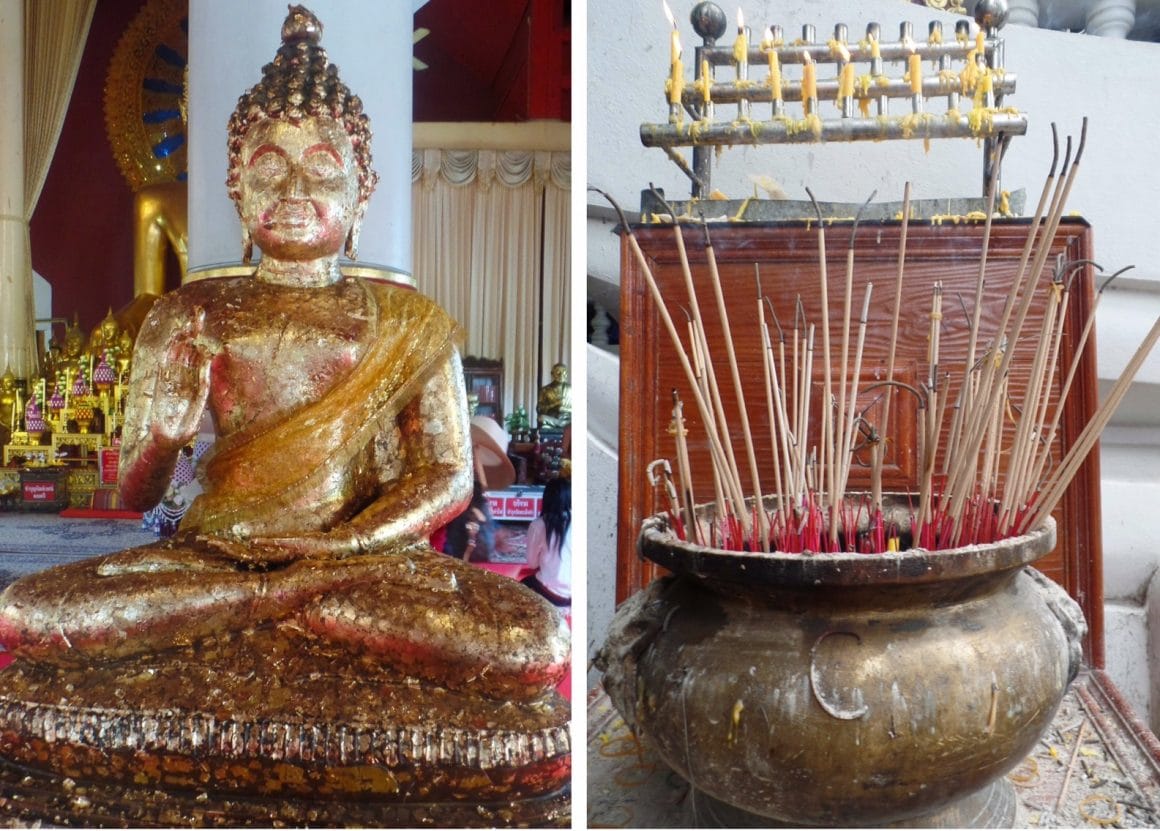 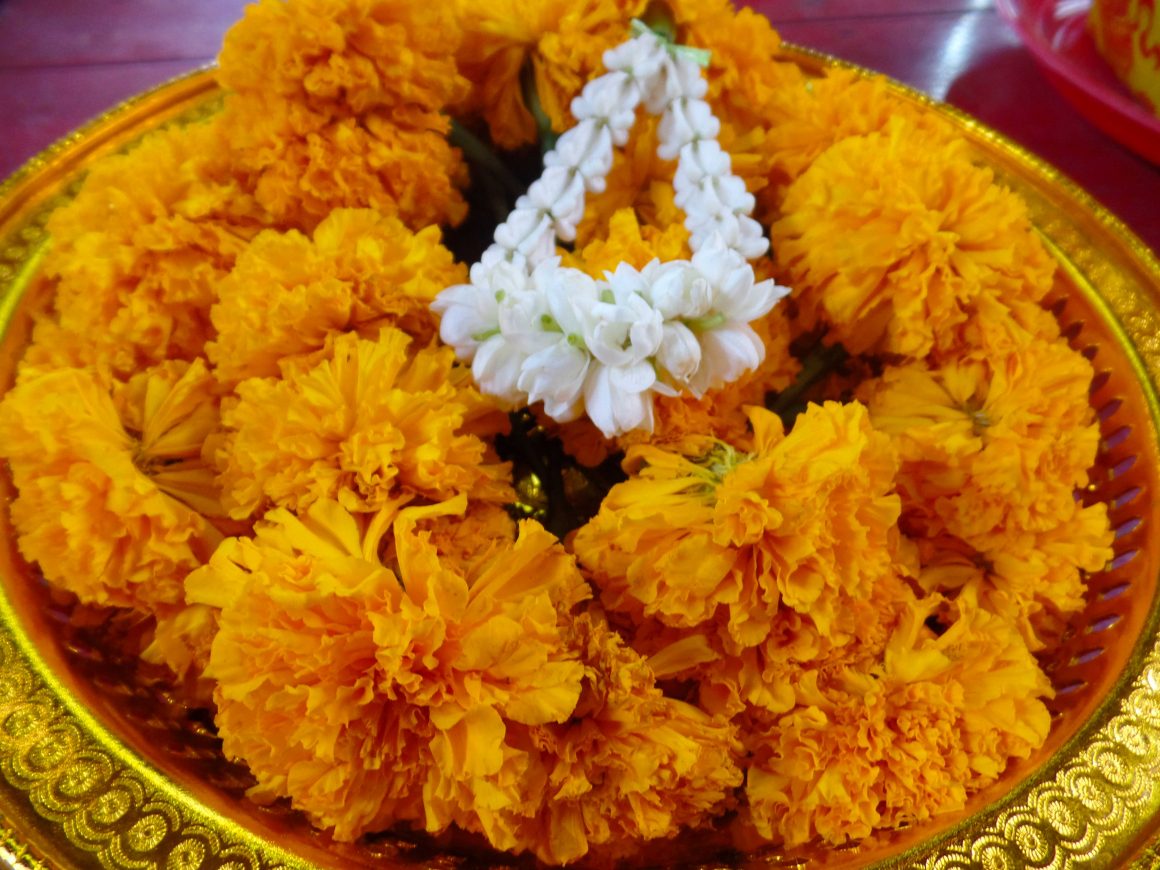 This is the usual image you will find in and around a Thai temple. But Bangkok would not be Bangkok if there were no exceptions. Below the four temples in Bangkok that stand out from the crowd.

The Wat Phra Kaew is an unbelieveably beautiful temple you cannot/must not miss. Far outside the walls you can see the golden towers. When you’re inside you’ll see that these ‘towers’ are actually stupas. The Thai call these stupas chedis. Anyhow, they’re beautiful, just like the dazzling gems on the exterior of the temple. But also the sculptures of the mythological figures grab your attention. Both sides of the gate are guarded by yaks, five meter high lion-like temple guards with strict but beautiful decorated faces. And the chedis are accompanied by sweet kinnons, an animal fable from the buddhist mythology. Half horse/bird, half human. 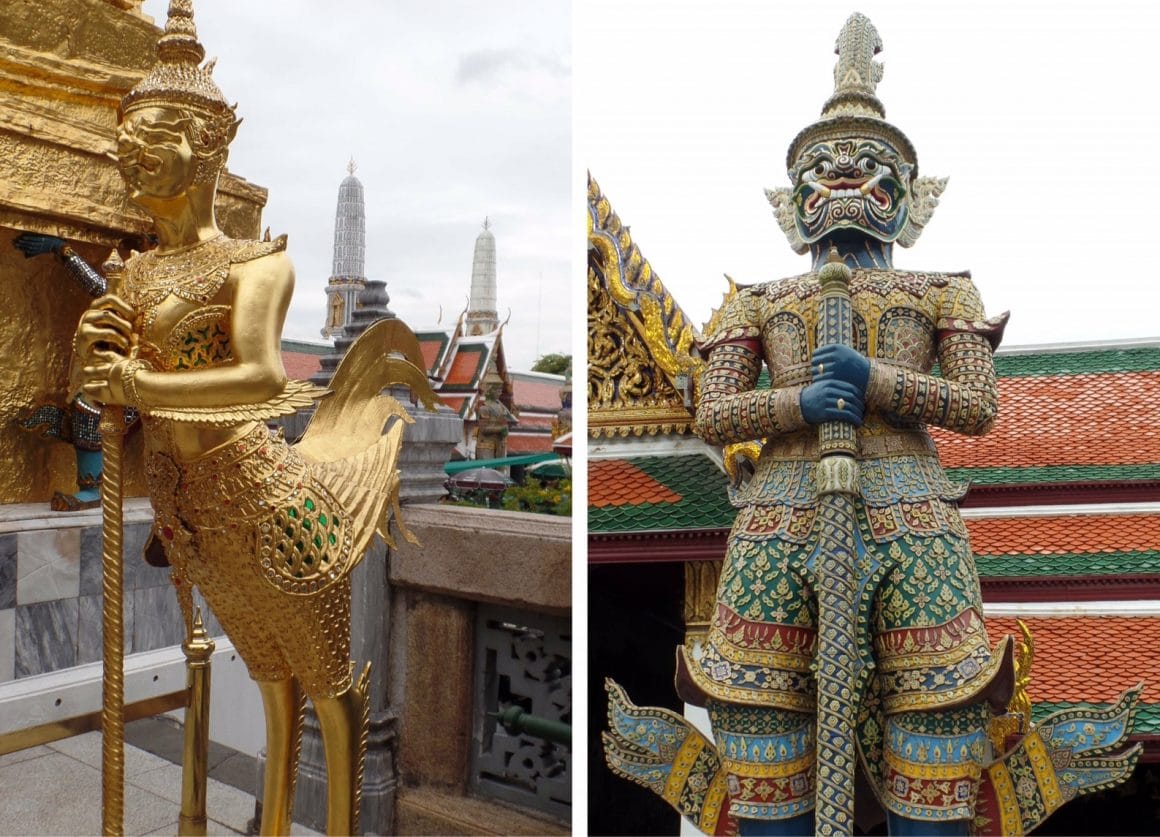 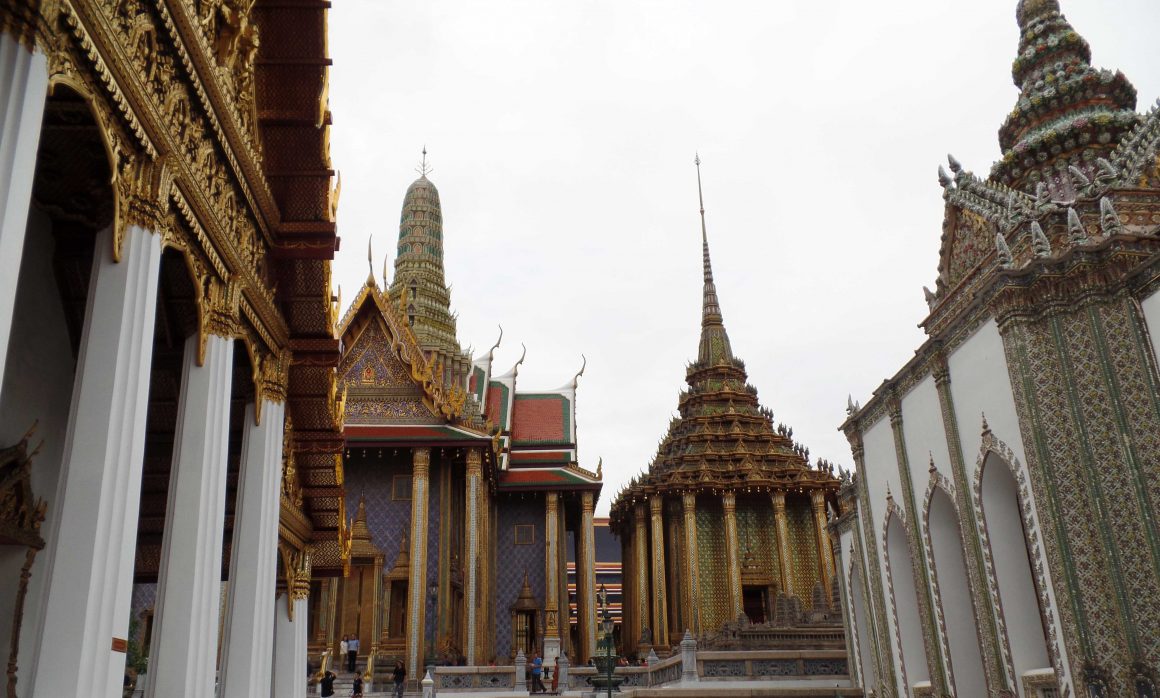 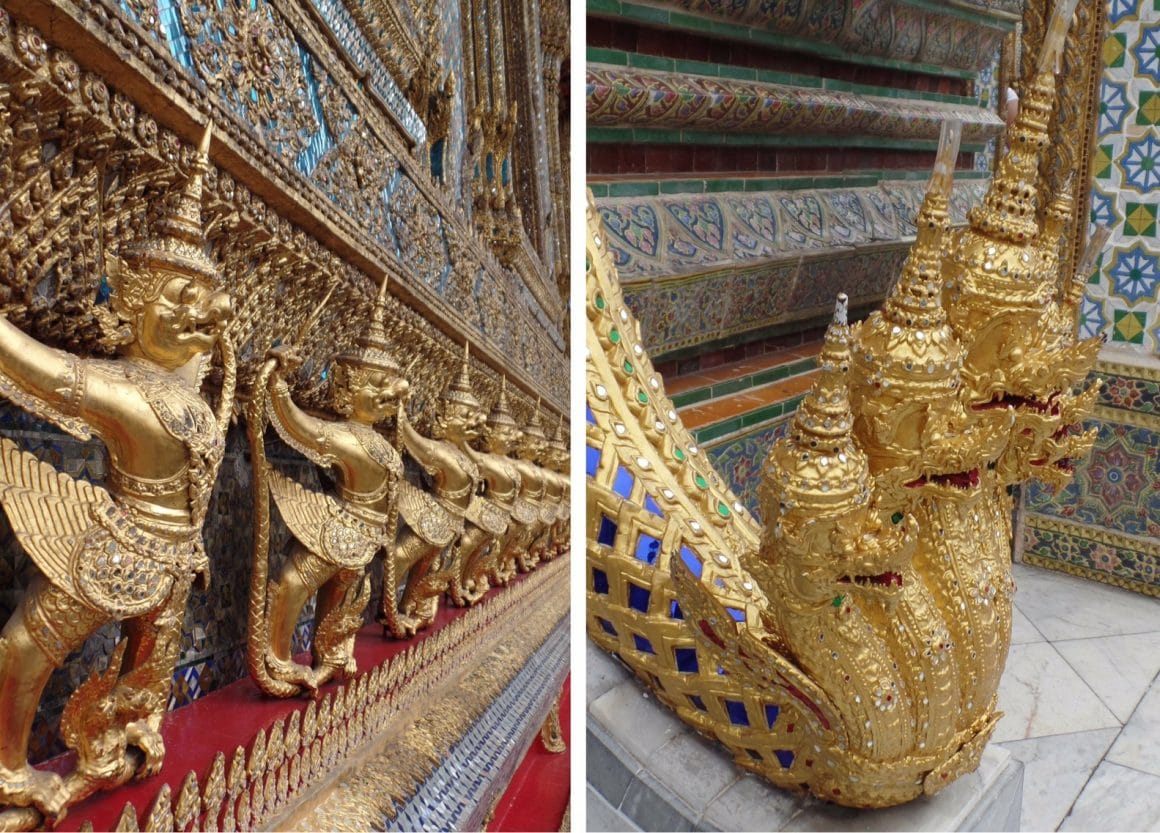 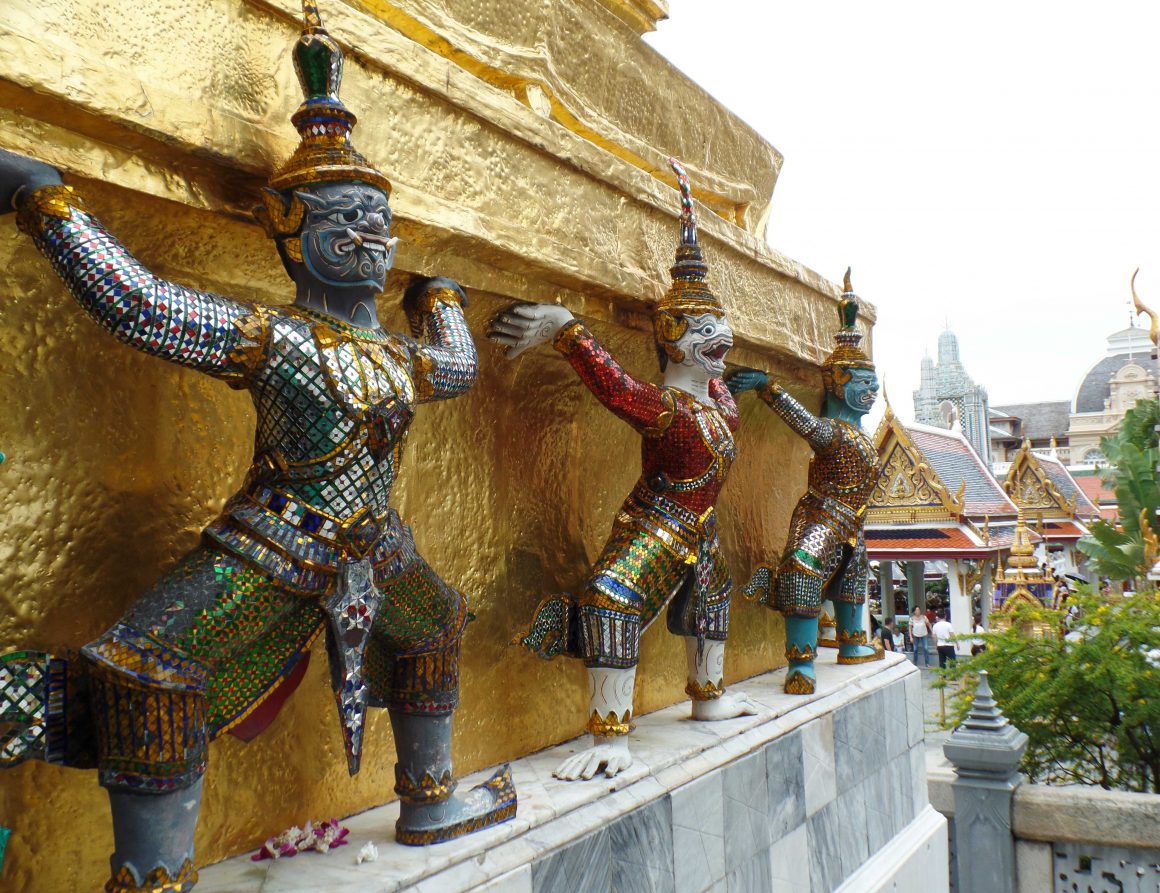 The Wat Phra Kaew is by far the holiest place in Thailand. This is because of the emerald green buddha in the temple. Although this buddha is only 66 centimeter high and is not made of emerald but jade, it’s still the most important buddha of Thailand. The sculpture is found in Chiang Rai and is passed on as a war trophy from king to king. Today it’s an excentric sculpture with in the summer a crown and in the winter a shawl. It’s even so excentric and holy that you cannot take any pictures of it. But don’t be sad, to comfort you here some pictures from the beautiful exterior of the temple. 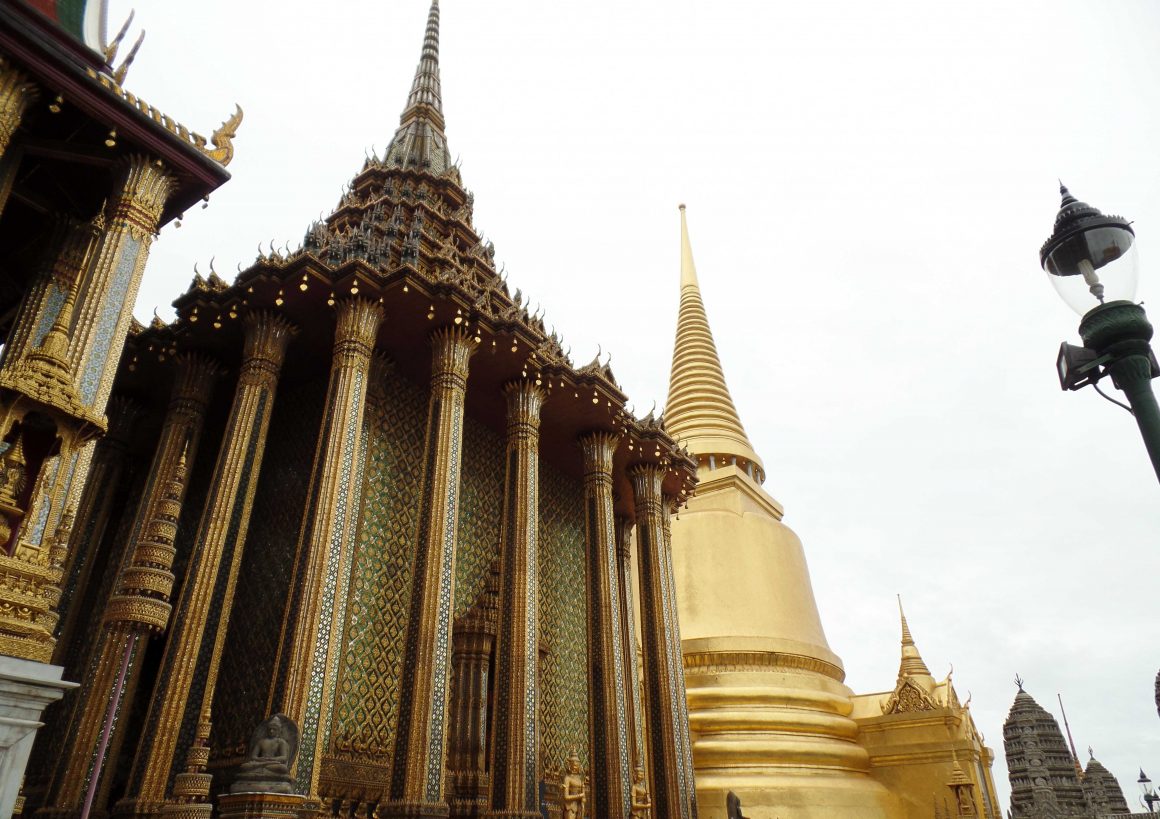 When visiting the Wat Phra Kaew, you should  also take a look at the Grand Palace. For a long time this was the residence of the royal family, but today it’s only used for ceremonies. The perfect details of the building are striking. Everything is punctually managed, even the bonsai trees in the garden. 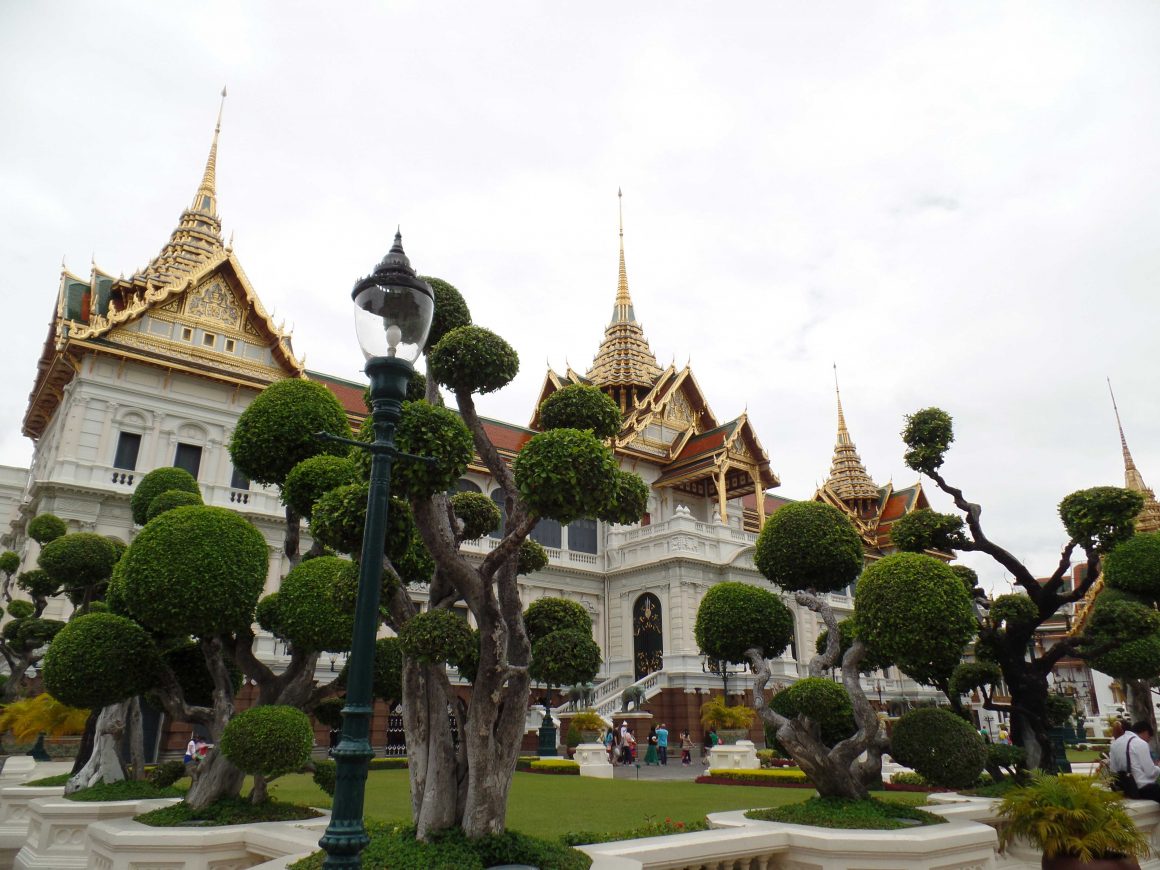 Entering the ground of the Wat Pho feels like entering a maze. There are 99 chedis on the premises, each and everyone with its own tile patron and color. Why not 100 you say? Nine is the lucky number of the Thai. But pay attention, four chedis are a little bit different. They are bigger and even better decorated than the rest. These are the chedis of the four kings of the current Chakri dynasty, each with their own color. Green for Rama I, white for Rama II, yellow for Rama III and dark blue for Rama IV. 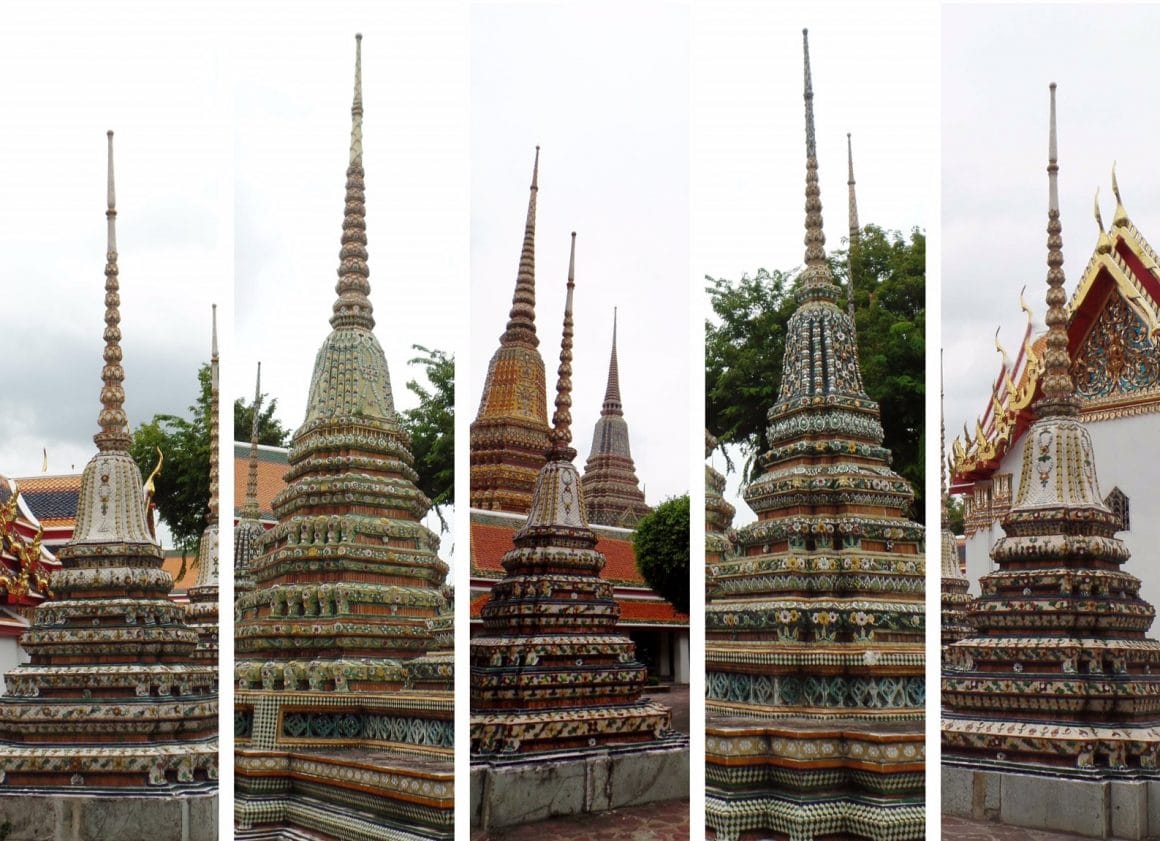 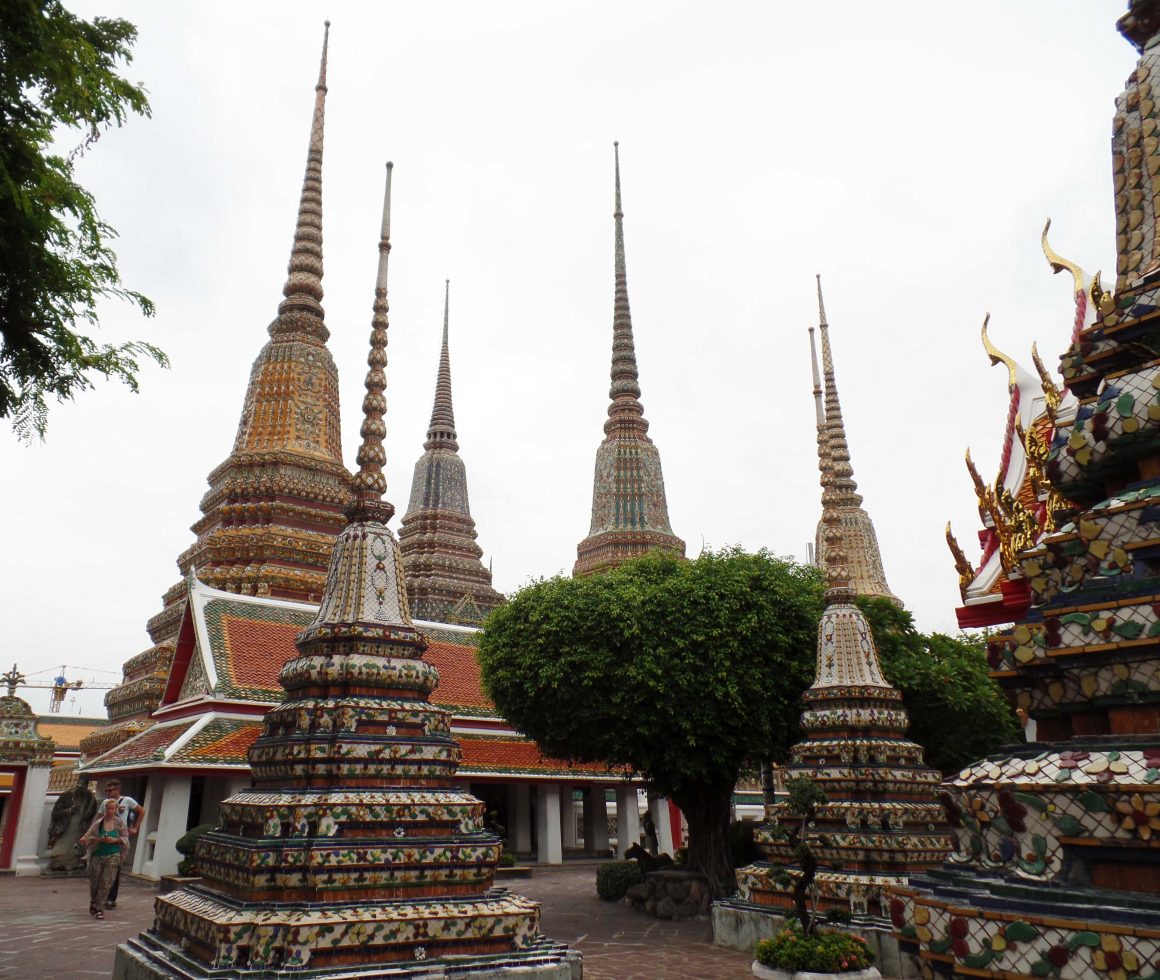 Because of the chedis you would almost forget why you came to the Wat Pho in the first place. This is the temple of the reclining buddha, the oldest and highest temple of Bangkok. It also has to be, because there’s a 43 meter long and 15 meter high golden buddha sculpture in it. And how strange this may sound, the most interesting part of the buddha are the feet. The patron on the tows is dazzling and the sole is decorated with 108 symbols of buddha. 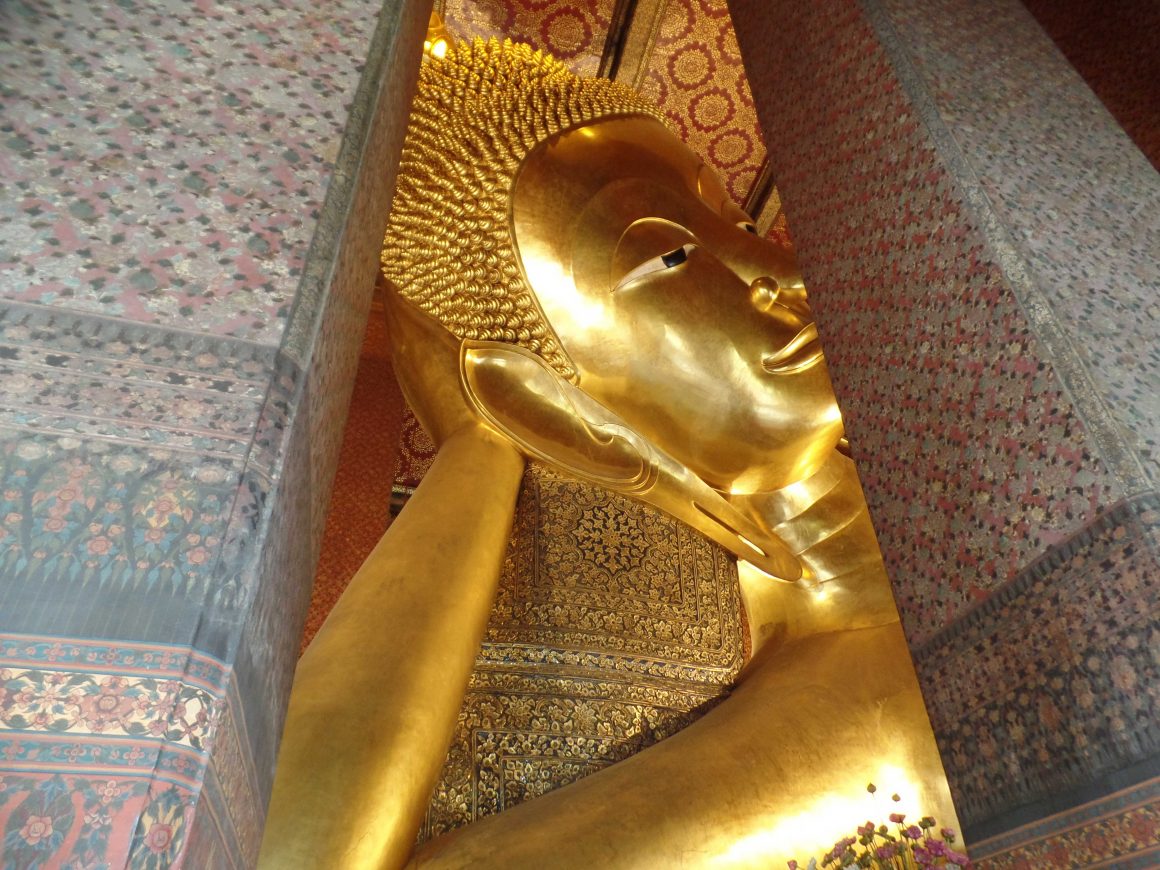 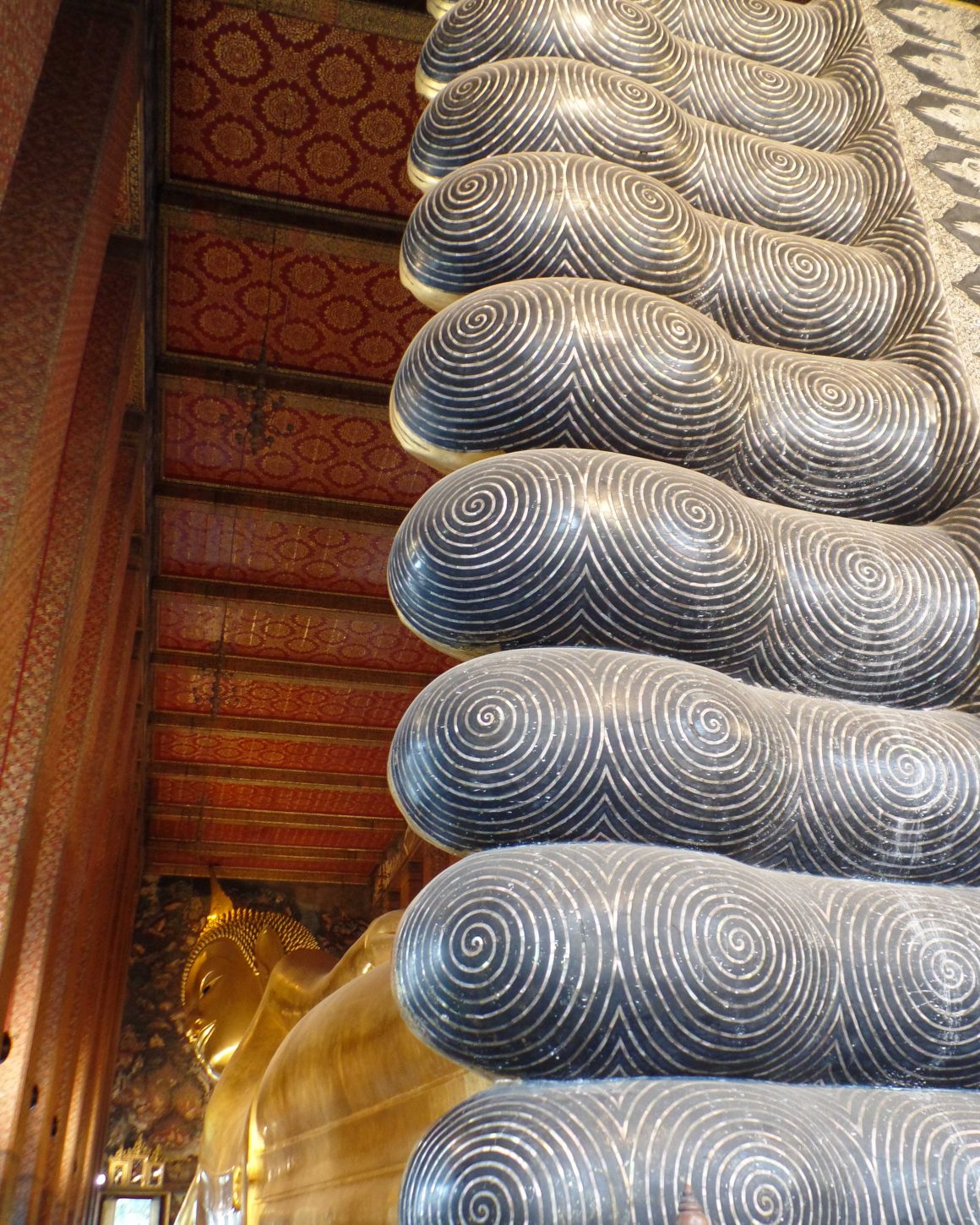 The Wat Arun is a special temple, because it’s dominated by a 82 meter high prang. This is a stupa built according to the Khmer architecture and decorated by Chinese porcelain. A dozen of flowered mosaic tiles are alternated by sculptures of wariors. Around the prang there are four smaller stupas and four mondops. Ascending the temple is a challenge because of the steep stairs. Going up is not that hard, but going down is hell for some people. For the young monks descending tourists are the entertainment of the day. 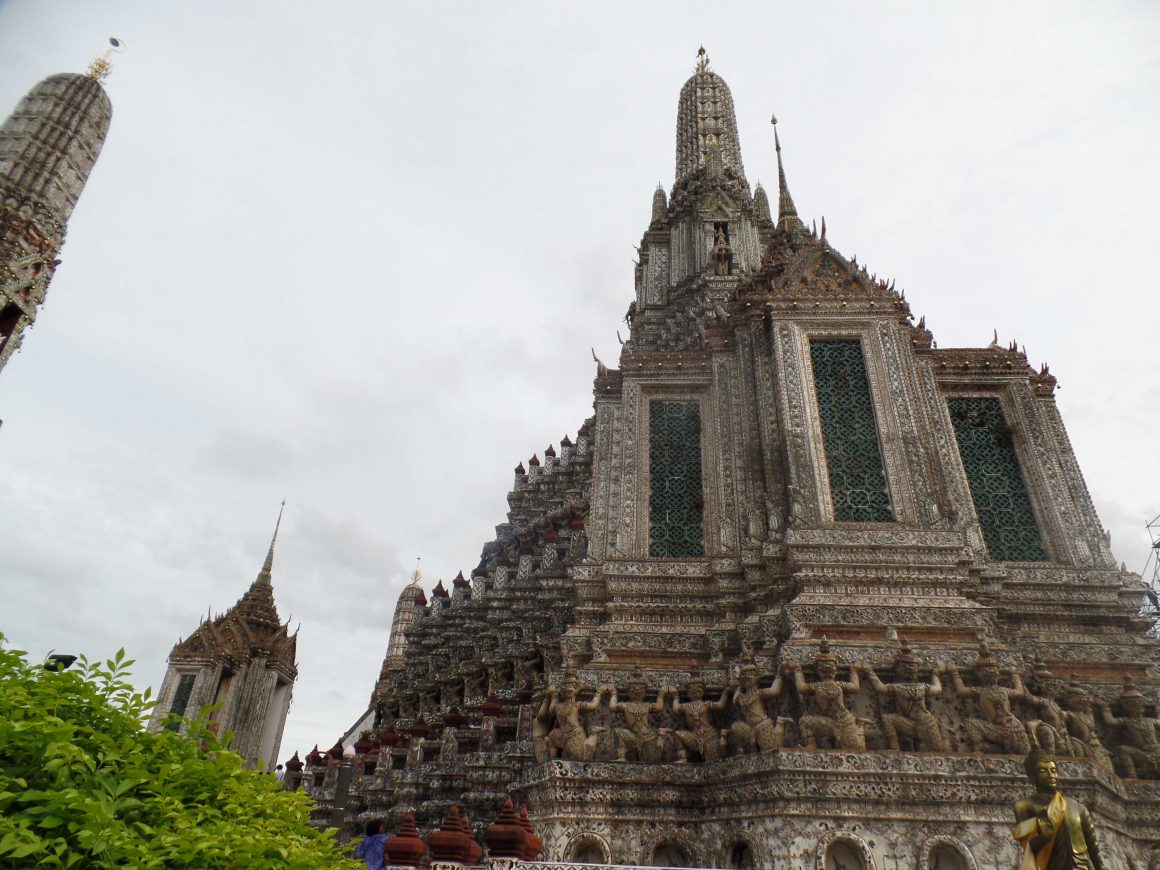 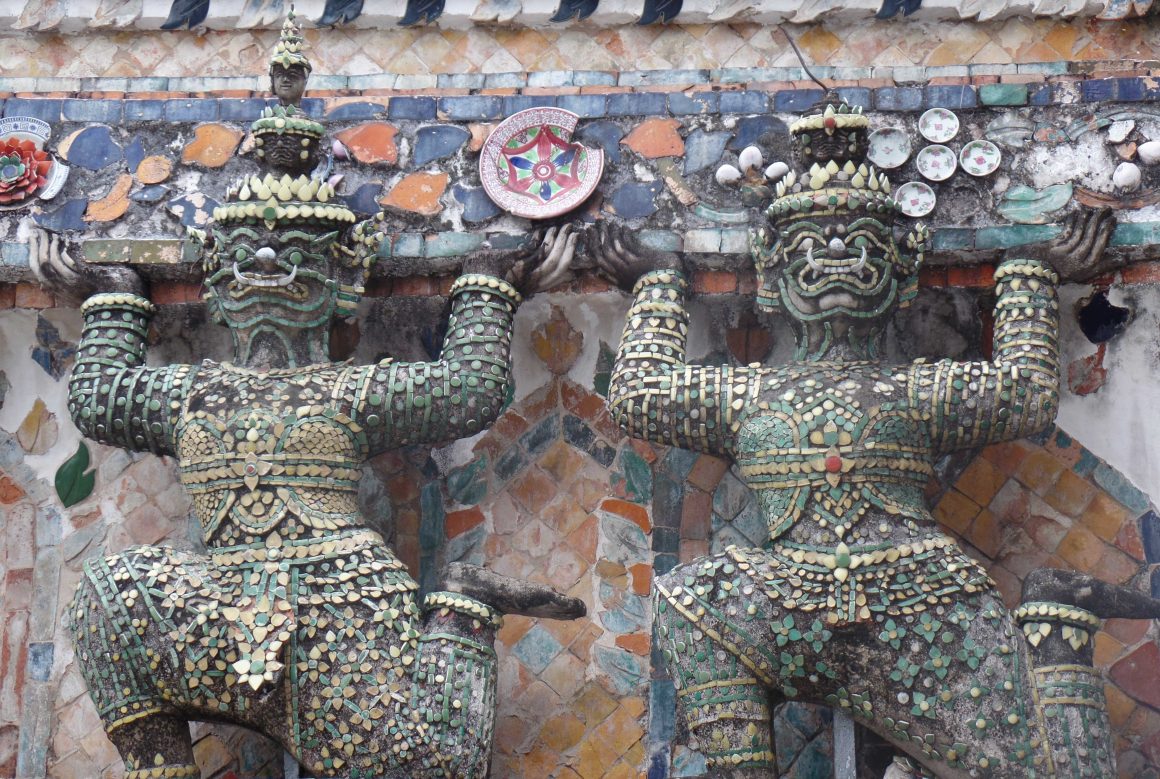 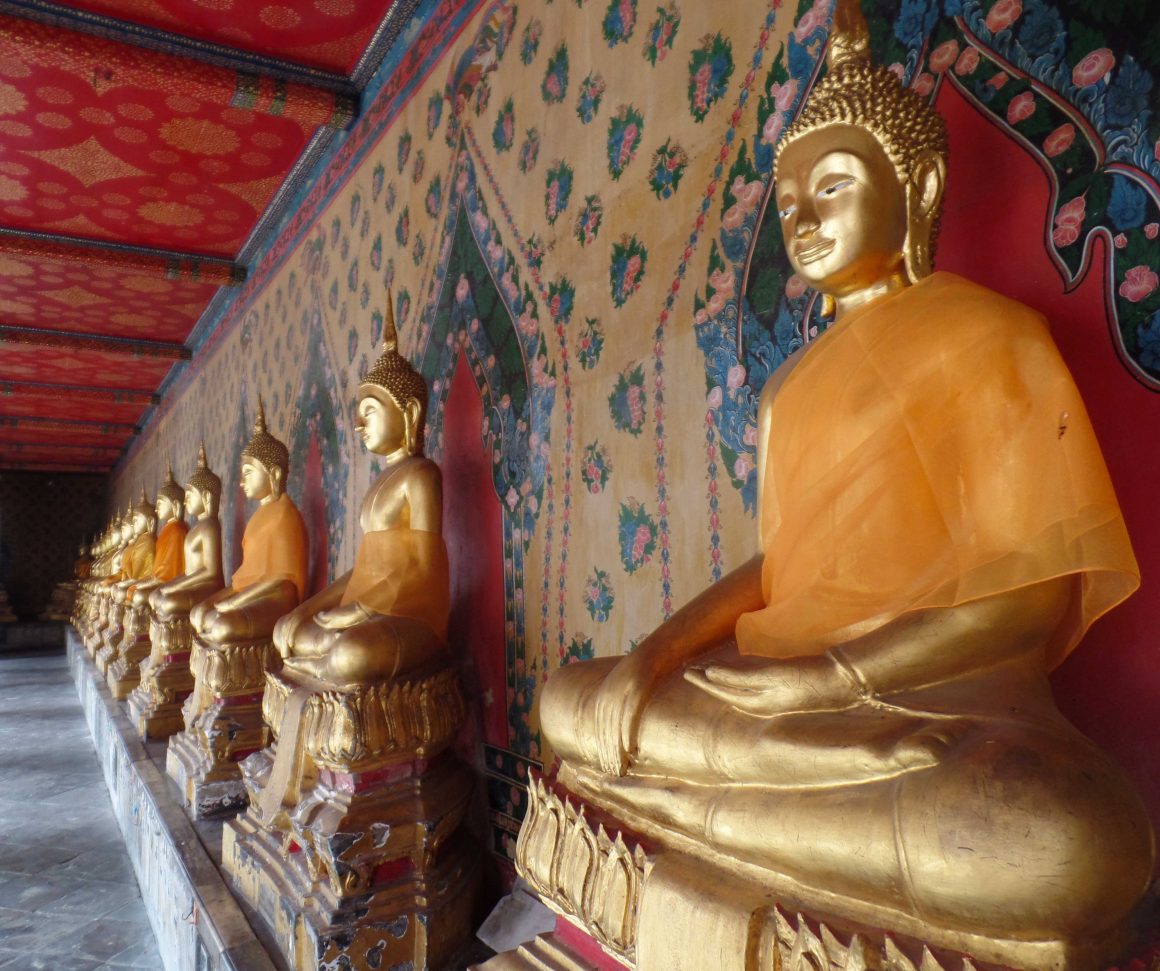 Okay, this temple may not have the majesty like the Wat Arun or the Wat Phra Kaew. But this temple does have a striking appearance and this is because of the 32 meter high standing buddha. My guess is that the architects might have thought: we could do the same as they did at the Wat Pho, only in an upwards direction. The structure took 60 years, but it was worth it. Tip: stand at the feet and look up. The view on the buddha goes on and on. 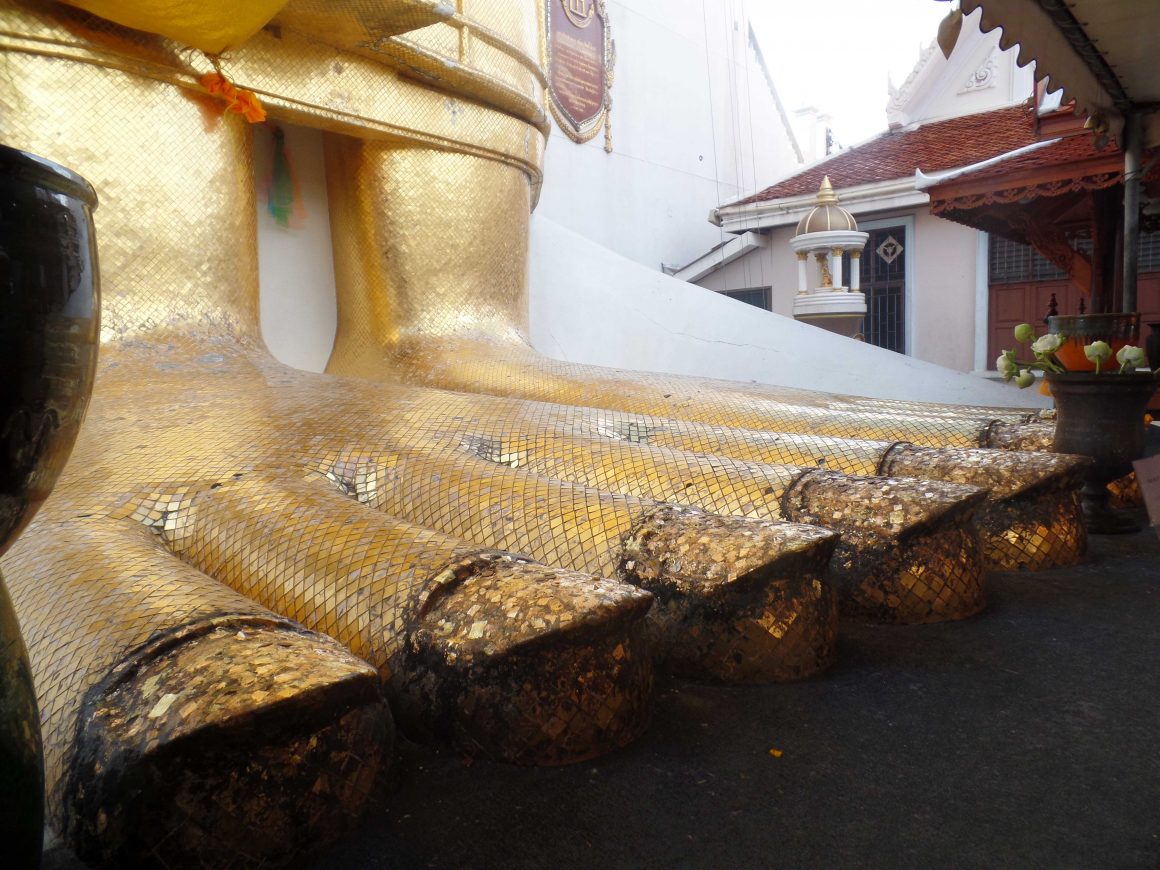 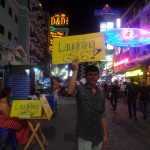 The chaos that is Bangkok 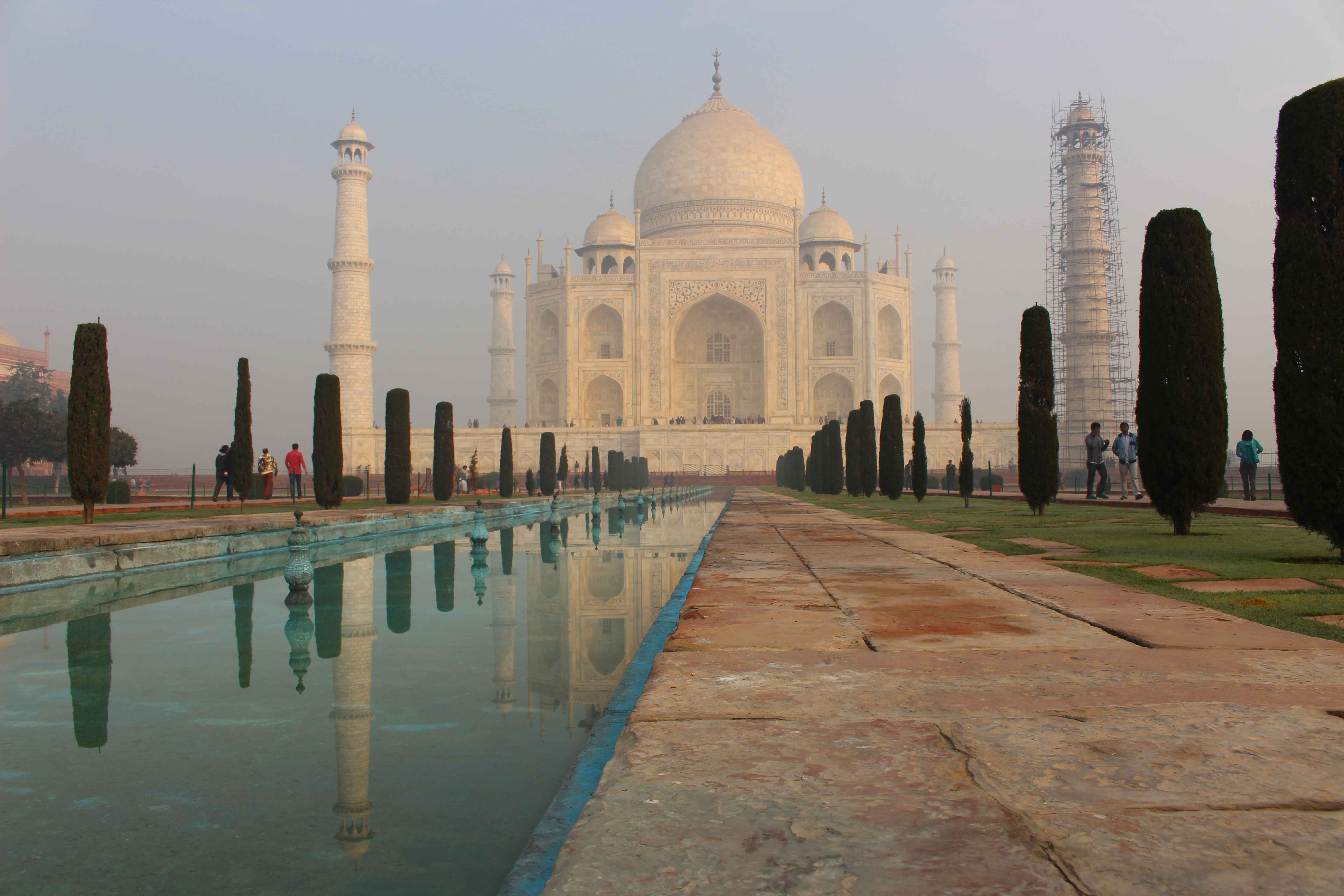 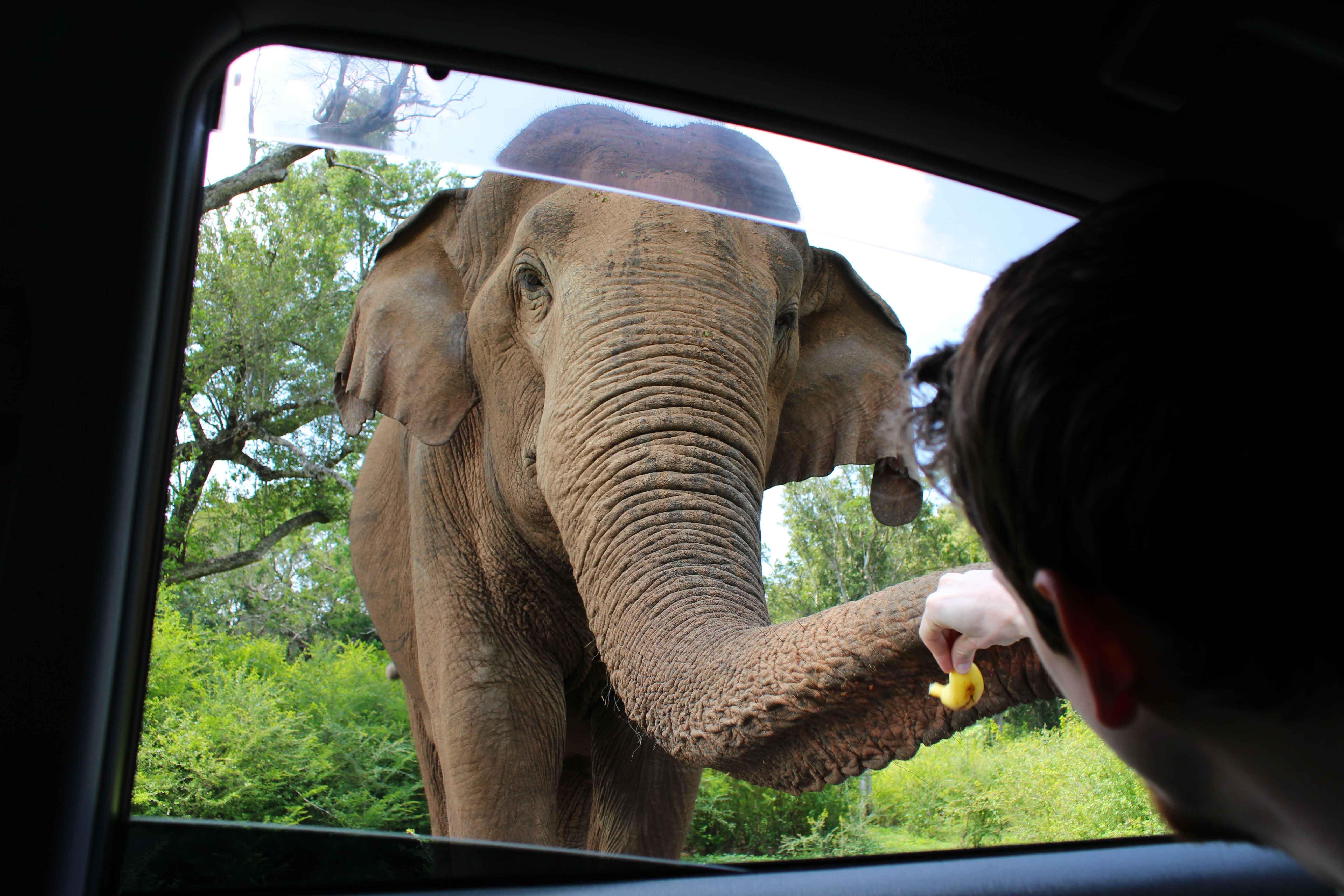 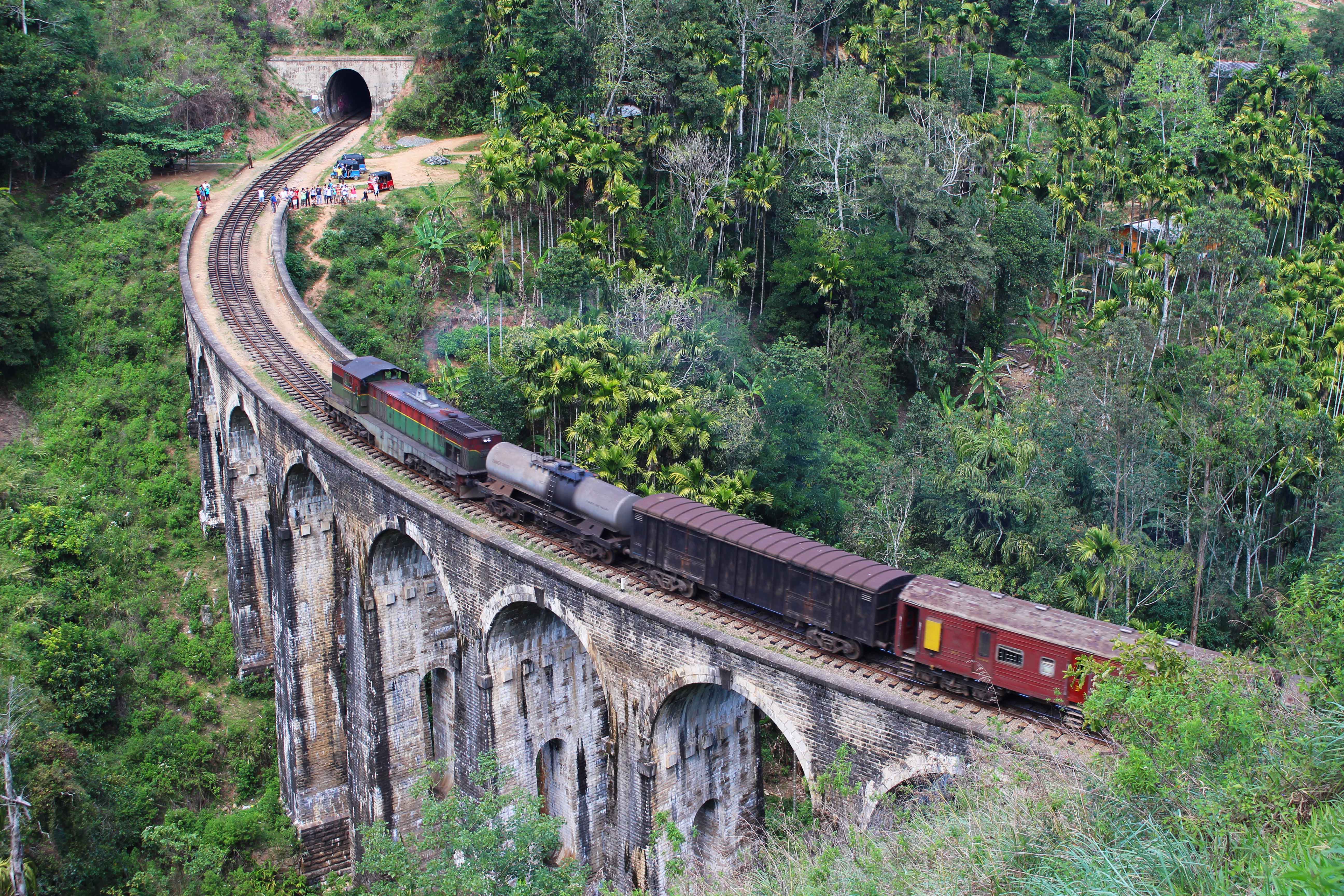