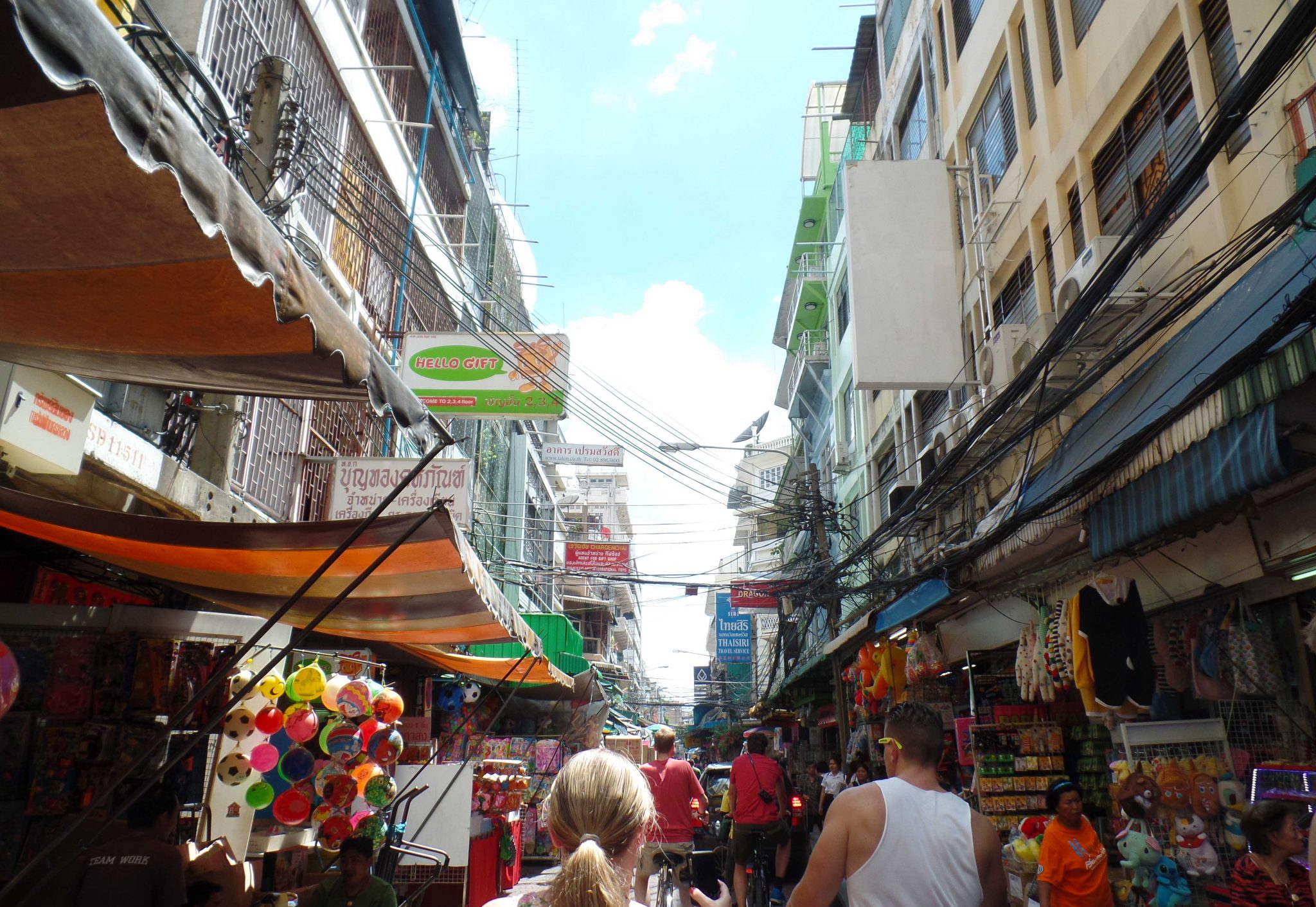 Bangkok, a city full with scooters, tuk tuks and other motorised vehicles. Adding a bicycle to the mix doesn’t seem one of the best ideas. Still, I can really recommend taking a bicycle tour through Bangkok. For me it was the perfect way to start a stay in Bangkok. The bicycle gives you the opportunity to get to know the authentic side of this city.

Thirty years ago a Dutch guy named Co van Kessel thought of the exact same thing. Co saw traditional Bangkok disappearing more and more behind the busy and modern look of Bangkok. And so he thought of a way to still enjoy the old ‘hidden’ Bangkok: by bike! And so the famous Co van Kessel Bangkok tours came into existence. As a Dutch girl I had to try out one of these tours. I chose the ‘Co Combo’, a bike / boat tour. Take a look at my route. 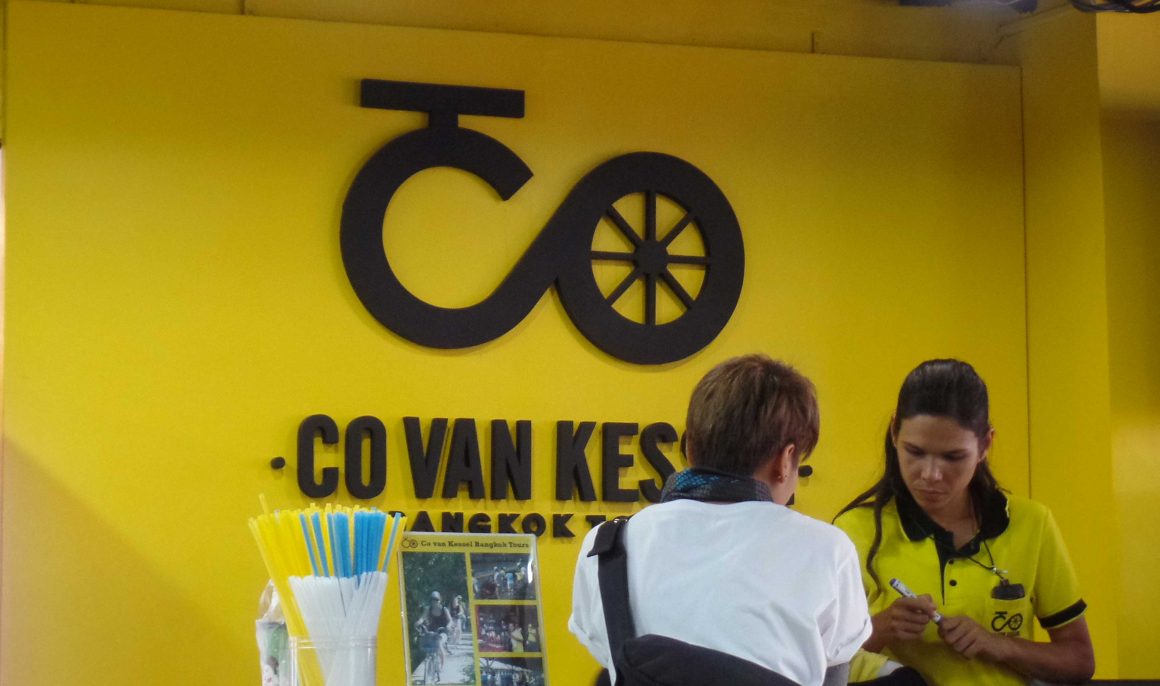 Cycling through the street restaurants of Chinatown

The tour starts in one of the busiest areas of Bangkok, Chinatown. This area is a sparkling scene and also one of the largest Chinatowns in the world. Because of the immense crowd cycling is impossible. But walking through the streets isn’t that bad at all. It gives you the opportunity to take a look at one the many foodcarts. We then head into one of the narrow alleys. It’s so narrow, that your shoulders almost hit the walls and you get a panic attack every time a scooter passes. Yes, scooters are everywhere, even in the alleys. And of course, people also do a lot of cooking and eating in the alleys. Food  is served in one of the temporary restaurants with the well-known plastic chairs. And we ride with our bicycles right through these restaurants. This is a strange, slightly embarrasing feeling, but the locals don’t even notice it. This is their daily life. 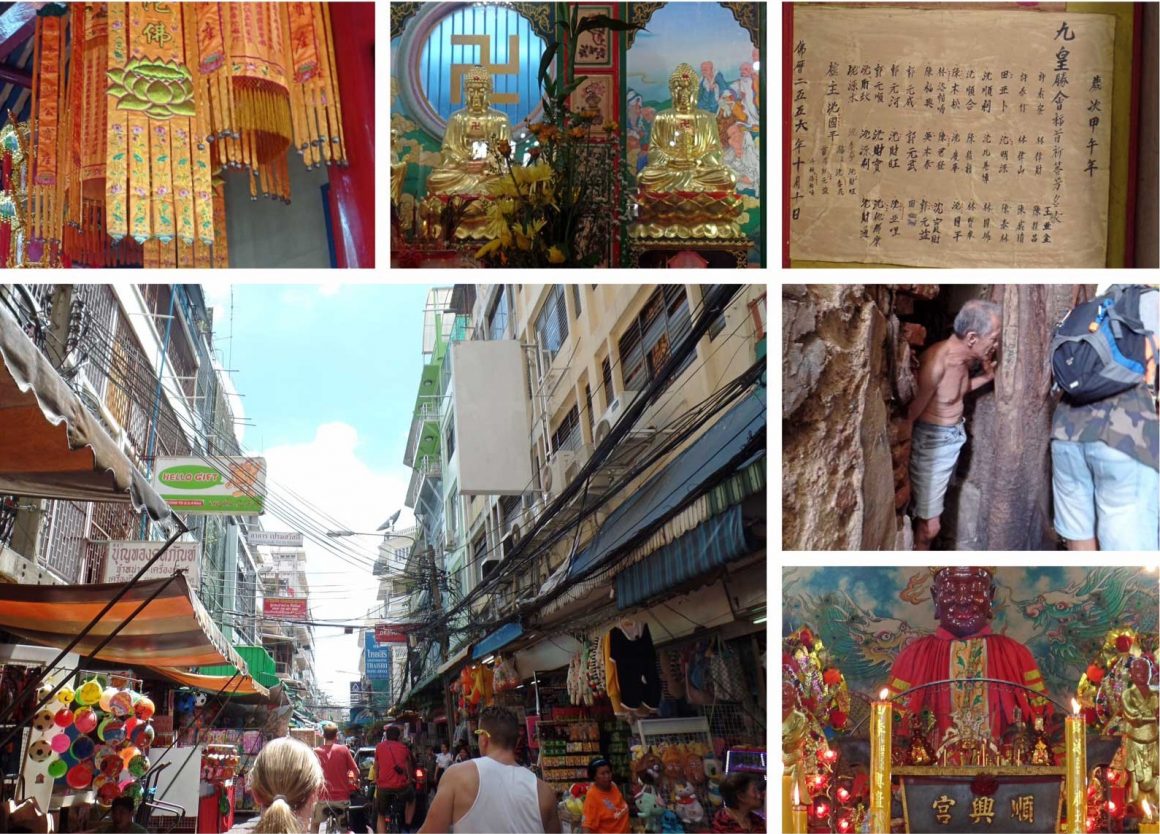 After vibrant Chinatown we make a stop at a local market where we look at one of the exotic foods like ‘mangosteen’. At first the fruit didn’t appeal to me (maybe this had something to do with the dark skin), but after bursting it open there was a little white fruit that tasted surprisingly sweet.  The market tour continues along the colorful spices, herbs and vegetables. It’s not only great for taking in the colors, once in a while we also get to taste a thing of two. 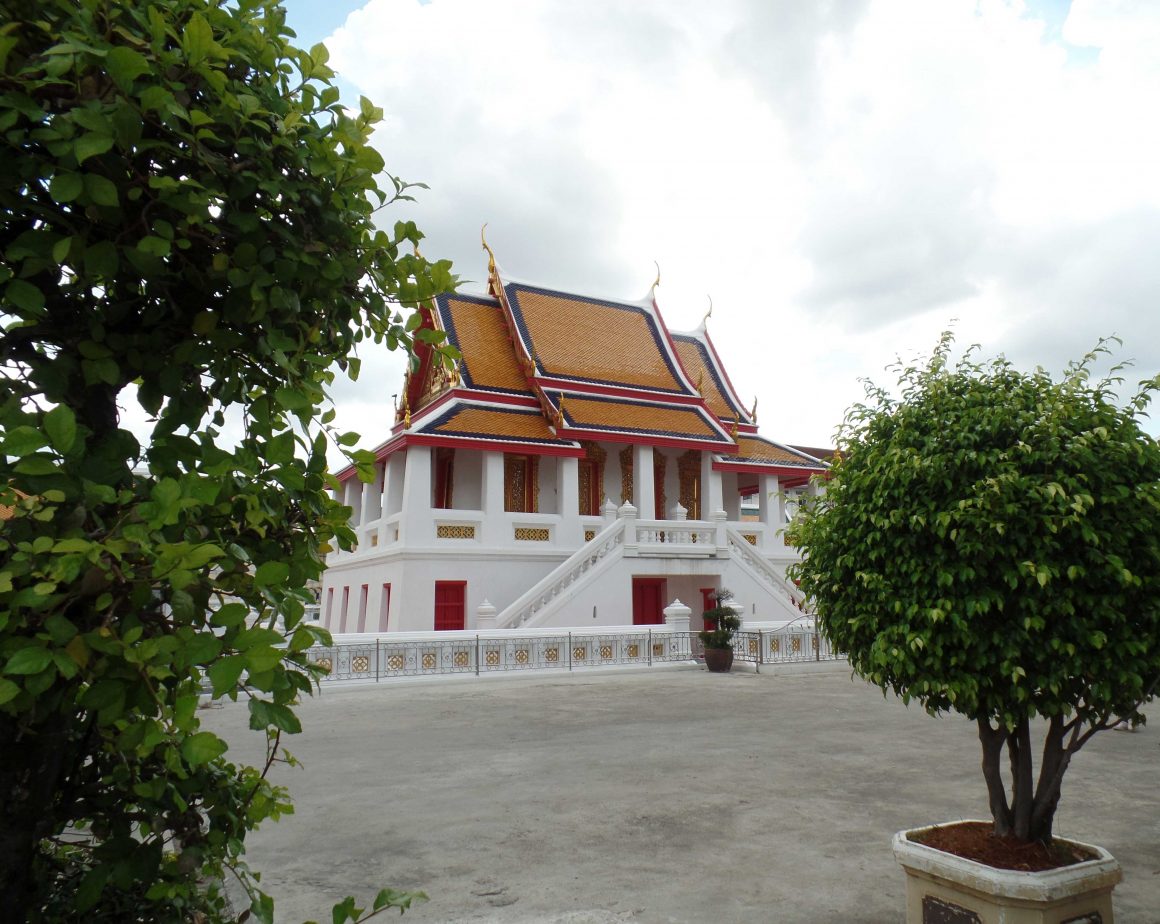 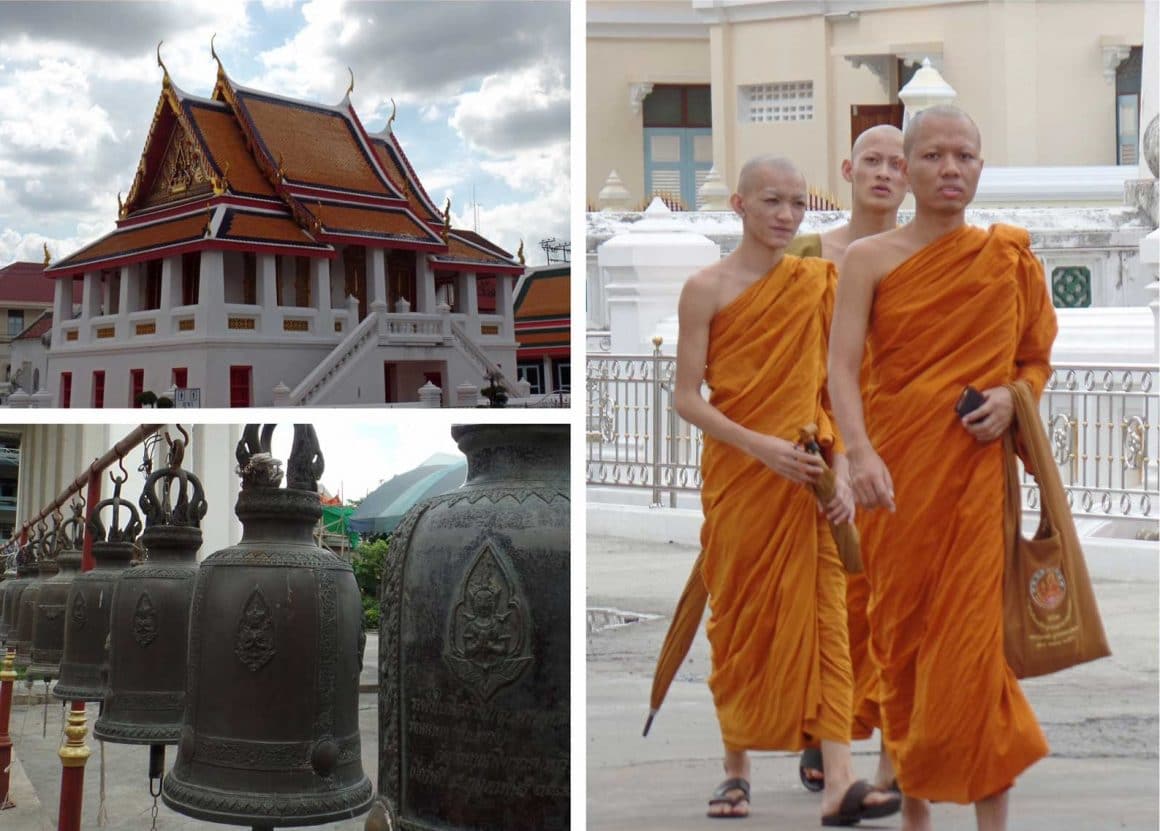 Of course a bicycle tour through Bangkok is not complete without a visit to one of the many temples. And so we make a stop at one of the smaller intimate temples, nothing compared to the Wat Phra Kaew or the Wat Pho. But that doesn’t matter. The visit is mainly meant to explain something about the Thai buddhist culture. For example, you should step over the threshold when entering a temple and you can ring the temple bell three times for luck.

After cyling for about an hour we get on our long tail boat and sail into the green veins of Bangkok: Phra Pradaeng. Heading to the oasis of rice-fields, vegetable gardens and palm trees. As soon as we get on land we take our bikes into the green jungle. Luckily they made it easy for us. The bicycle paths consist of concrete paths on masts. We pass colorful wooden houses, surrounded by green leaves and water. Kids play in the alley and wave at us when we cycle towards them. Spontaneous high fives are shared with a group of boys. Here and there you see a lost dog, but it doesn’t harm anyone. This is exactly the opposite of Chinatown. No neon signs and exhaust fumes, instead we see smiling kids and palm trees. Unfortunately I didn’t take that many pictures. It’s still hard to cycle and take pictures at the same time… 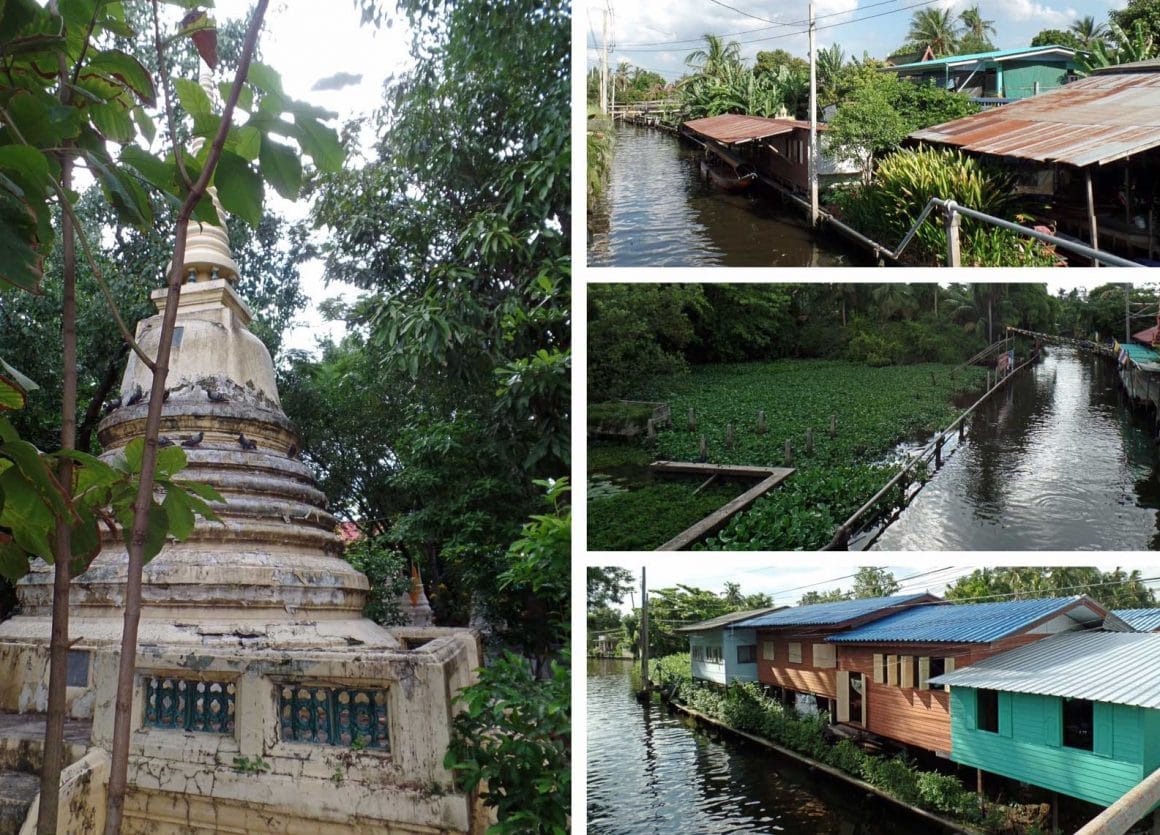 We get into our colorful long tail boat to explore the ‘klongs’ (canals) of Bangkok a bit more. Along the way we see two different worlds: wooden houses on masts and luxerous villas. The Thai everyday life unravels right in front of you. The laundry is hanging outside and the man of the house stands on the porch and stretches himself. A scooter with three, sometimes up to four, people crosses on the river banks and a monitor lizard swims through the ‘klongs’ to search for food. 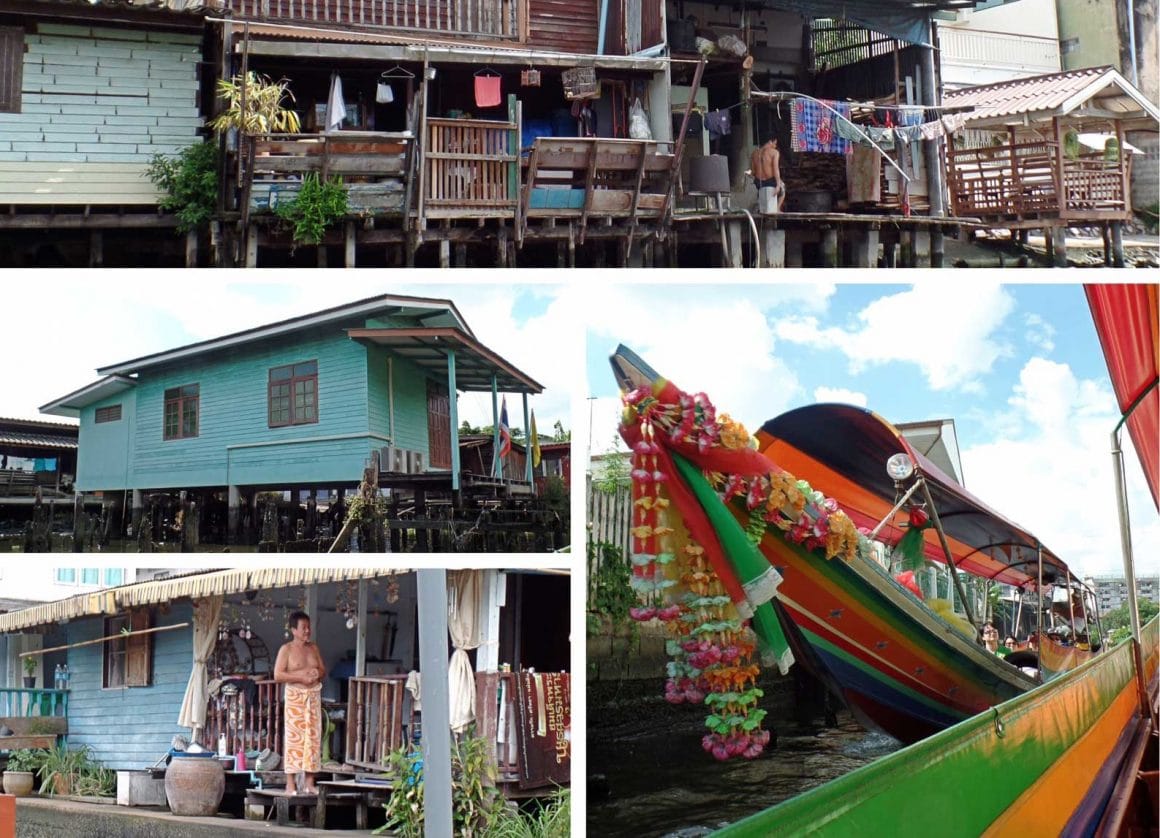 After an extensive lunch it’s time to explore the most important river of Bangkok, the Chao Phraya river. Lunch couldn’t have been timed better, because it was just about starting to rain. A typical Thai shower, that pours out of the skies but stops after 30 minutes. By boat we go to the Chao Phraya river where we can see the Grand Palace, the Wat Phra Kaew  and the Wat Arun at a glance. We left the calm ‘klongs’ behind us, so now we could go a bit faster. We bounced over the water of the Chao Phraya all up to the skyscrapers of Bangkok. Soon we recognised the Lebua State Tower where the movie Hangover II was shot. Arriving back at shore we cycled with a smile on our faces back to the headquarters of Co van Kessel. 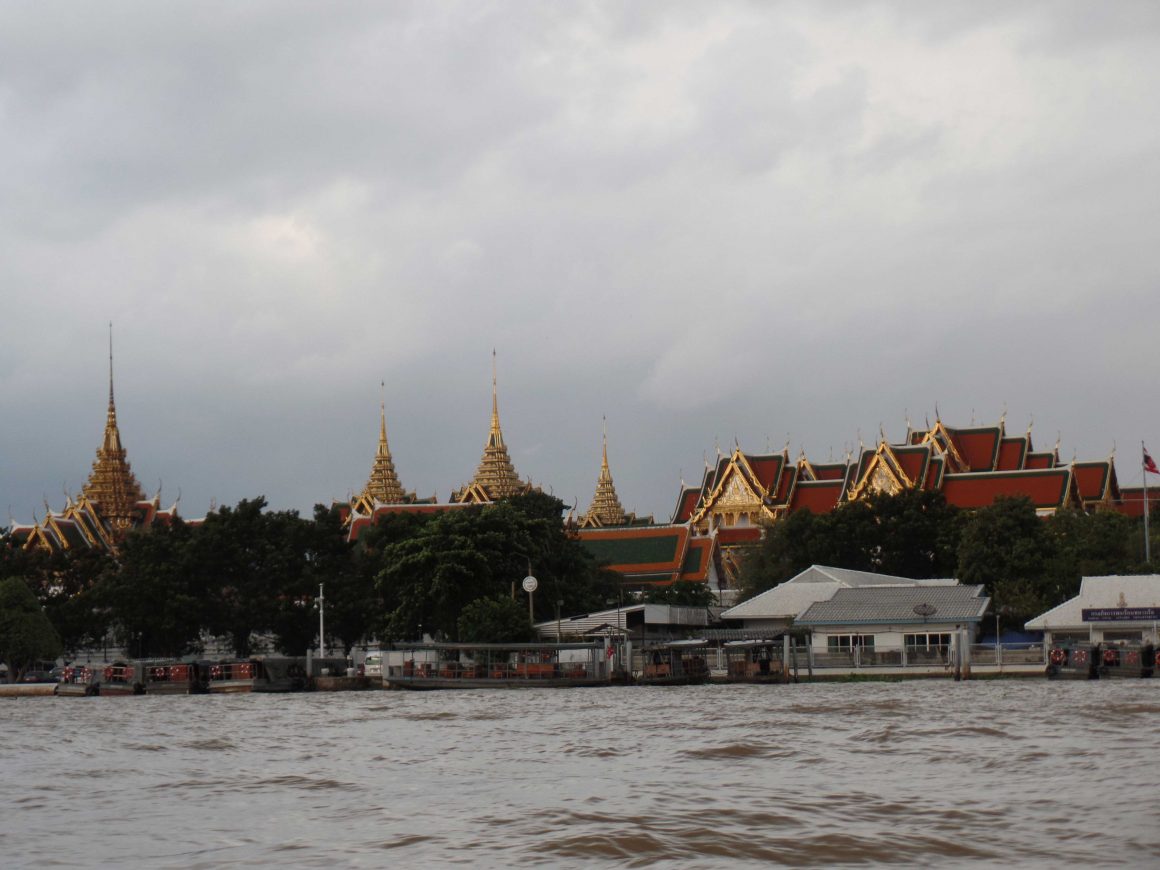 So, don’t let the busy motorised traffic of Bangkok scare you off. Rent a bike (and a guide!) and get to know the other side of this Asian metropole.

Have you already experienced a bicycle tour through Bangkok? 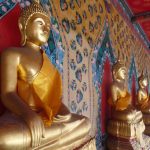 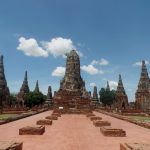 The lost times of Ayutthaya