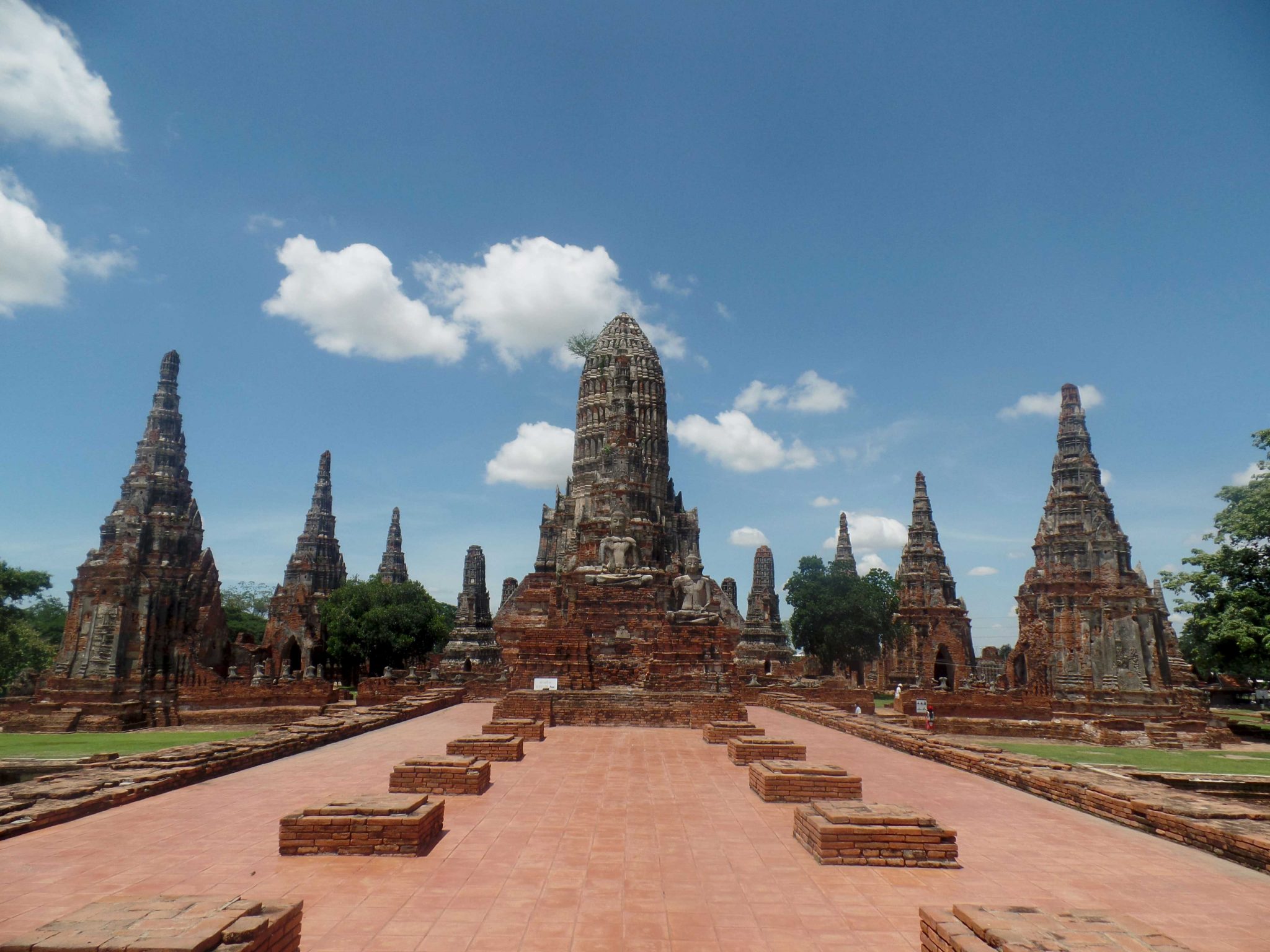 The lost times of Ayutthaya

I’ve got a weak-spot for ruins. They have something magical. They take you to lost times. Times of the merchants and their horse & wagon, but also the times of the almighty rulers and their kingdom. Those times are gone, but you can relive it by walking into a city of ruins. Walking through the gate, that they walked through. Seeing that same temple, that they saw. And honoring that same buddha, that they honored. This is the feeling I got when I walked into the ruines of Ayutthaya.

Ayutthaya was once the capital of old Siam, former Thailand. The city existed for more than 400 years before it was destroyed by the Burmese army. You could still see the damage as there was no money for reconstruction. The results are buddha statues without heads and pulverized temples. The Burmese invasion was the end of the city of Ayutthaya. For us it made Ayutthaya even more impressive.

Ayutthaya consists of numerous magnificent ruins. You can spend days exploring the city. But let me save you the trouble by giving you the shortlist of temples that are definitely worth your attention.

In the centre of the old city stands one of the most beautiful temples of Ayutthaya: the Wat Phra Si Sanphet. There’s only one word to describe this temple: wow! Personally my favorite. This temple is different than any other temple. After entering the premises your attention is immediately drawn by the three giant grey chedis that collect the ashes of the three most powerful kings of ancient Ayutthaya. It’s remarkable to see that there are no burn spots or destructions. At least that’s what it looks like if you stand in front of the temple. At the backside there’s actually quite a lot of pulverized buddha statues and overthrown stone chedis. Also a 16 meter high buddha statue, covered with 250 kilograms of gold, is missing. Sadly the Burmese melted this down during the destructions. 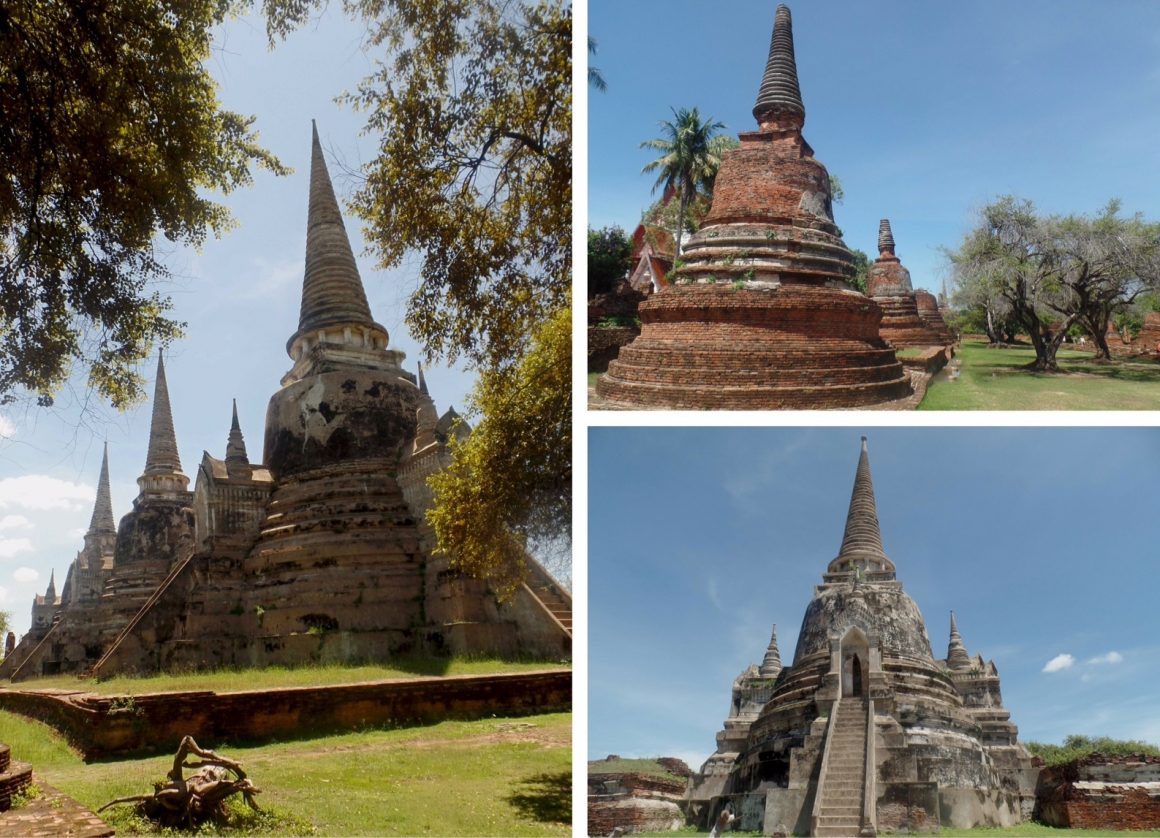 A close second is the Wat Chai Wattanaram. A quick translation tells us that this is the temple of ‘long reign and glorious era’. You can really see this by looking at the temple itself.  It’s situated next to the most important river of Thailand (Menam, also known as the Chao Phraya) and consists of several prangs in various sizes built at equal distance from each other. Along the walls you can see several rows of buddha statues (at least what’s left of the buddhas). This temple really was a taste for us of what was coming up: the Angkor Wat in Cambodia (coming soon, stay tuned!). This is because of the construction style of the Wat Chai Wattanaram: it’s the Khmer architecture. 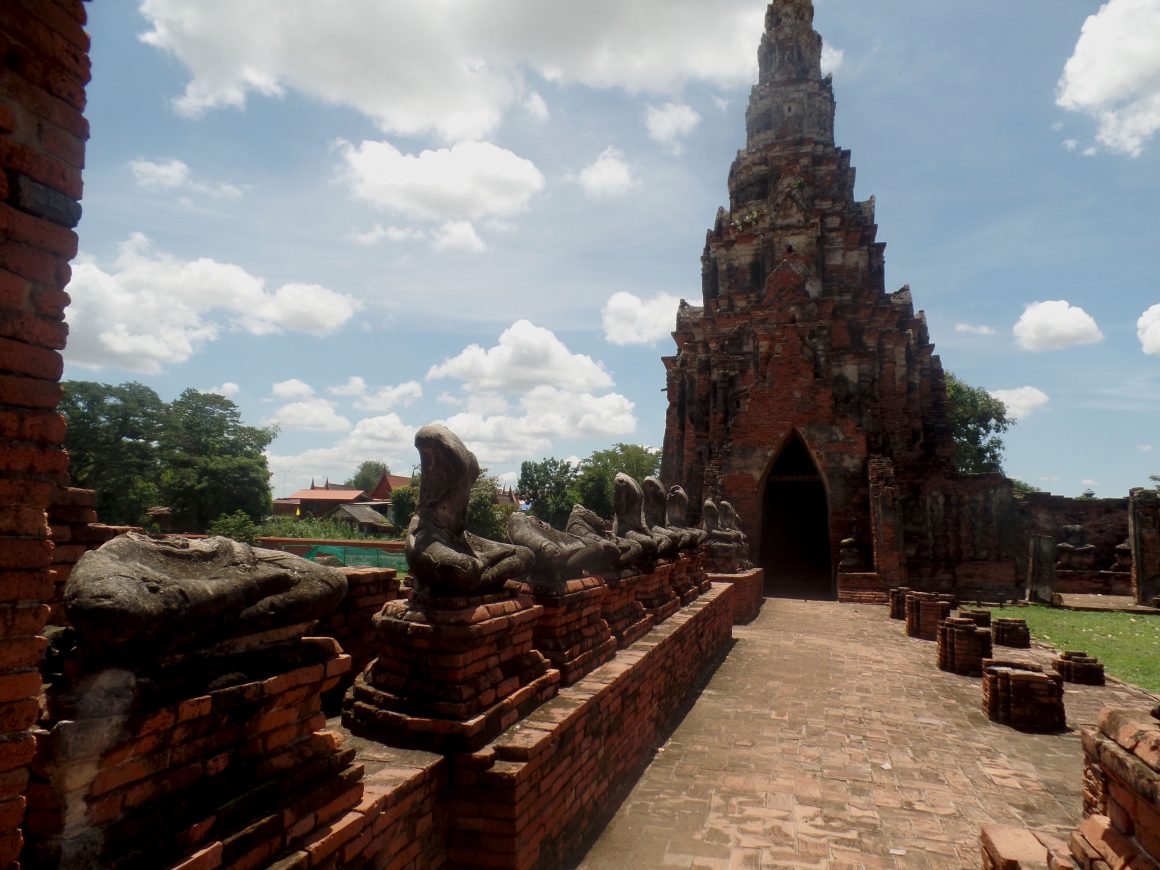 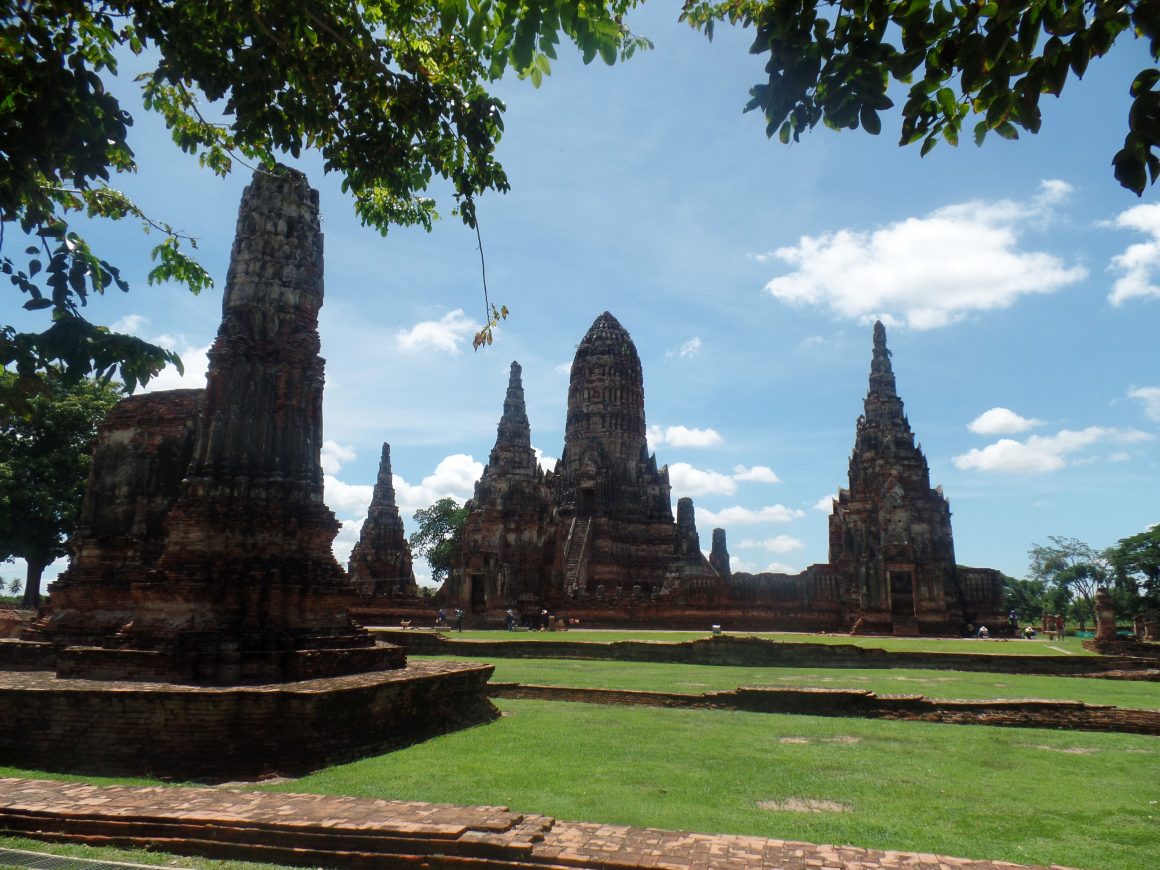 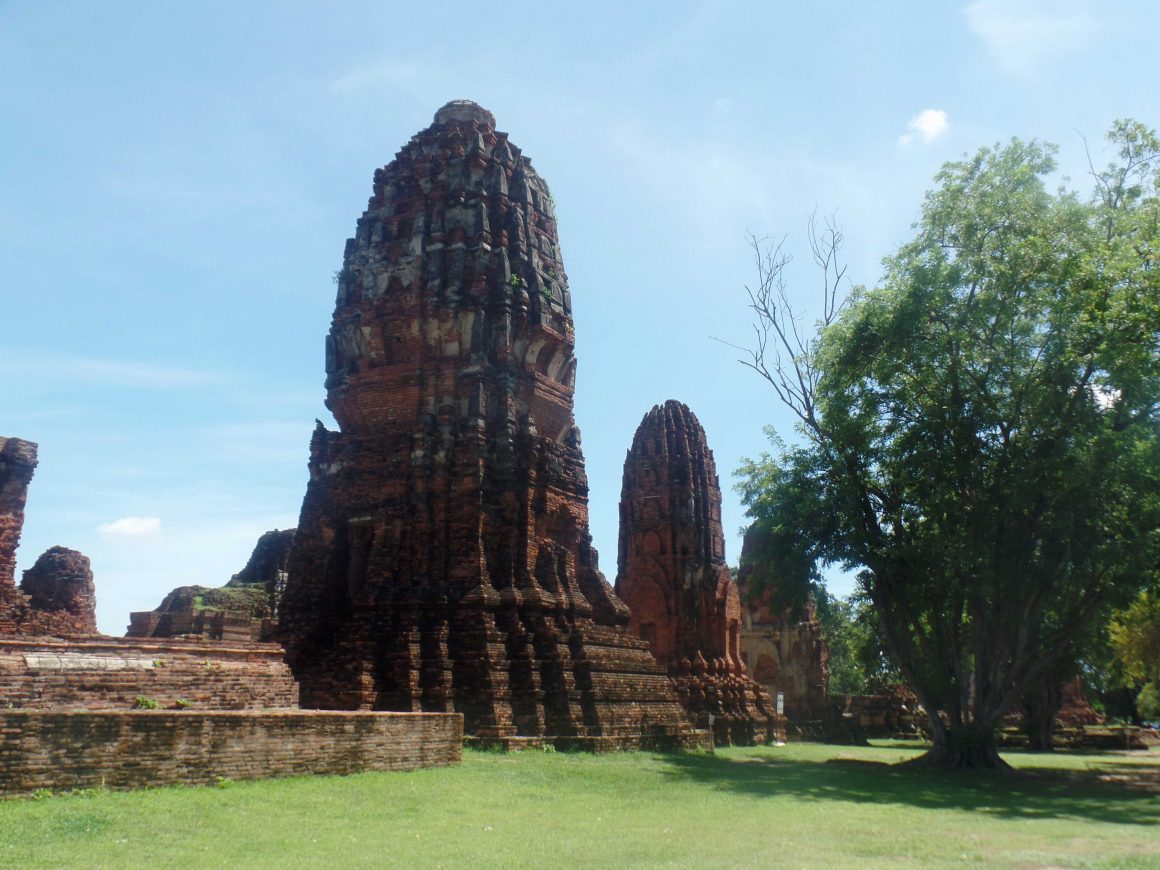 This complex is not really known for its temples (although they are pretty impressive), but for a certain buddha head. During the Burmese invasion the Burmese chopped off several heads of the buddha statues. One of these heads probably rolled over to a tree and got as the years passed strengled up into the roots. At least that is the story. We don’t know if it’s based on the truth. What I do know is that this buddha head is a strange thing to see. It just looks straight ahead, and it even smiles at you. A perfect peaceful face with a sad story. 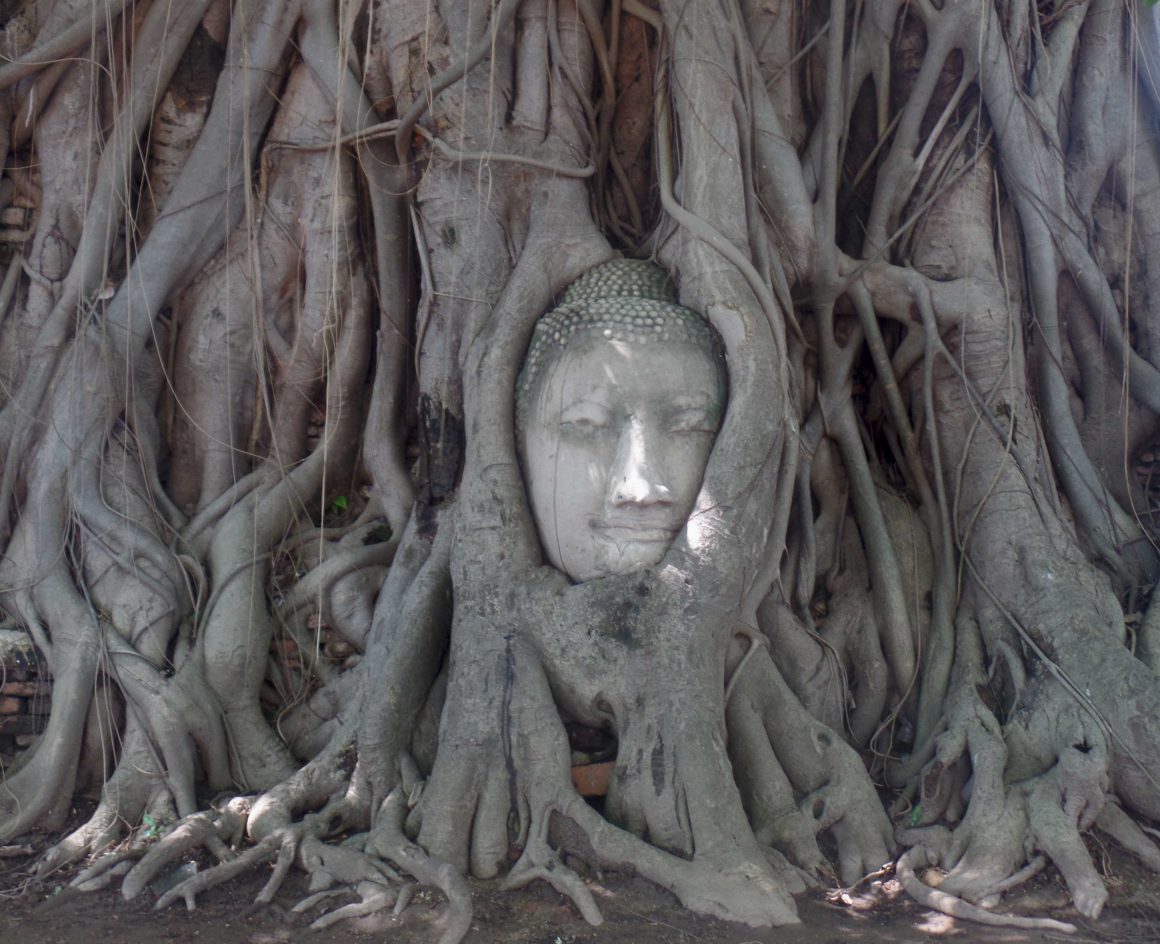 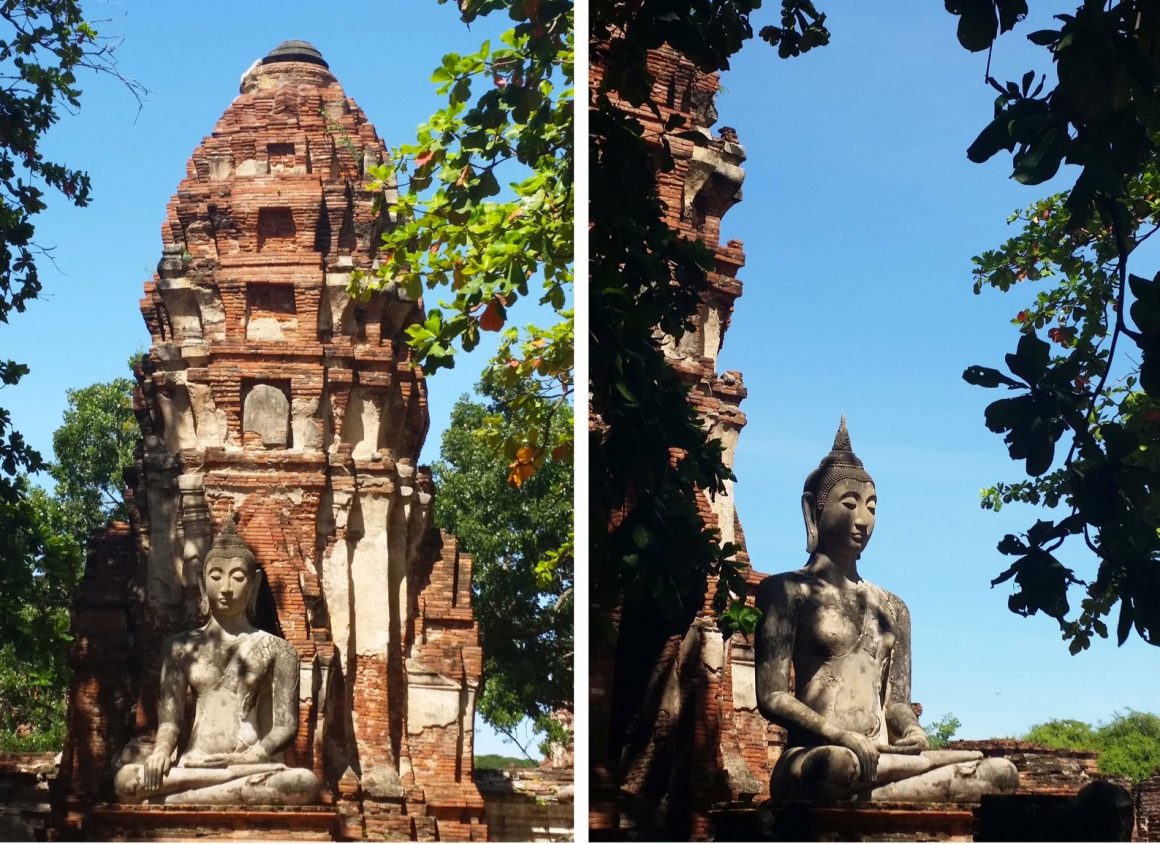 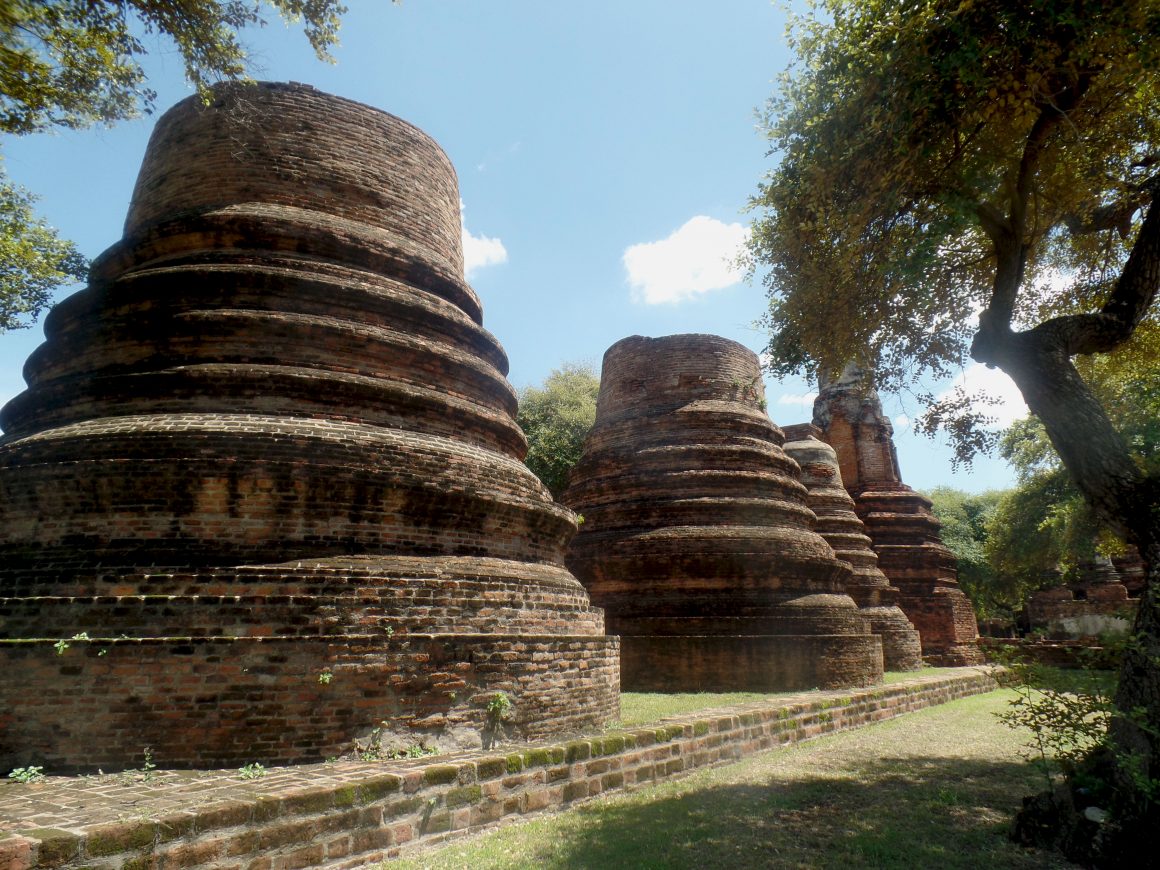 Our last stop reminds us of the Wat Pho in Bangkok. The Wat Lokaya Sutharam consists of a gigantic reclining buddha. You could say this is the less fortunate brother of the buddha in the Wat Pho. It’s smaller (38 meter long and 8 meter high), it has a grey color and it has no roof over its head. There used to be a temple, but this was also destroyed by the Burmese. For the Thai people, the buddha statue is still sacred. Proof is the prominent saffron cloth which covers most parts of the buddha. 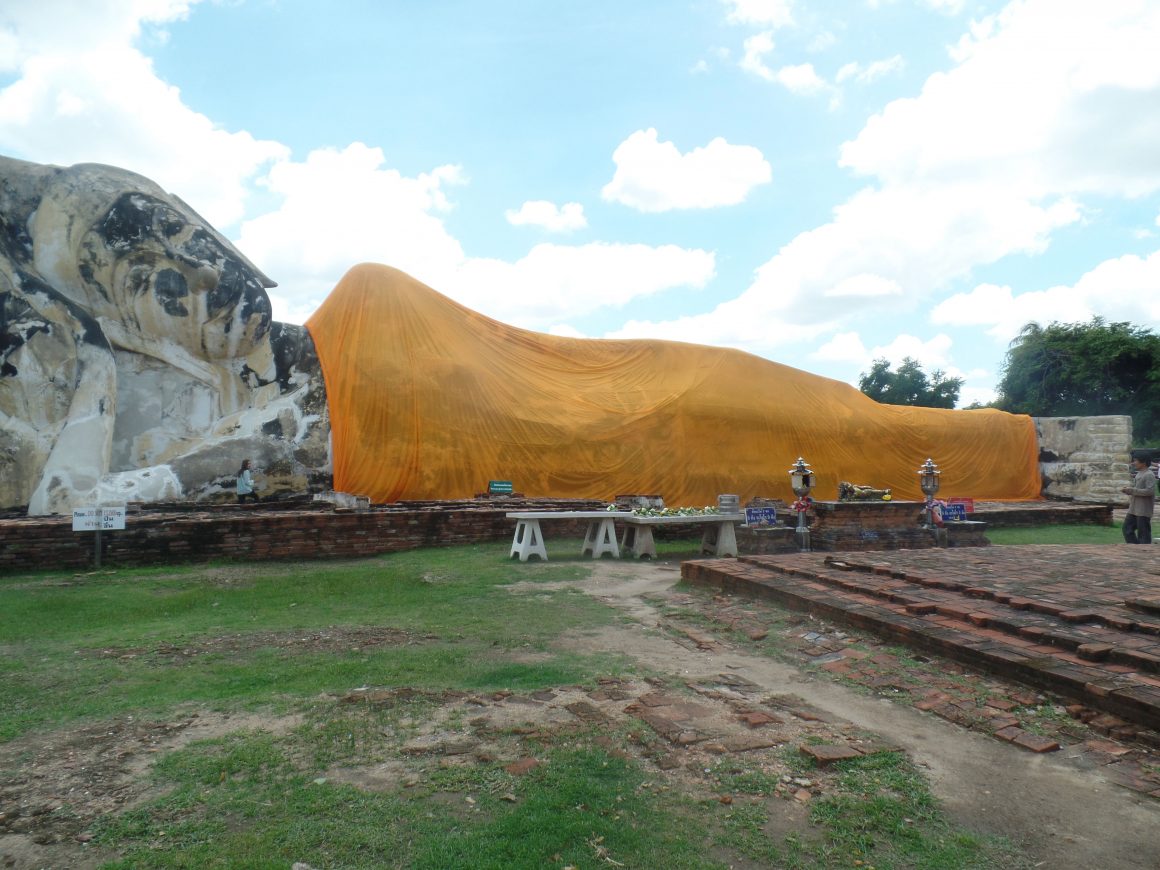 How to get around?

The ruins of old Ayutthaya are scattered throughout the city. Walking from temple to temple isn’t really an option. That’s why it’s wise to rent some sort of transport for the day. You could choose for the bike, but we opted for a more lazy option: the tuktuk. For 1.000 Baht we rented a private tuktuk with a female driver. This is mainly the reason why we we’re interested in the first place. All this time we hadn’t seen a female tuktuk driver. It was a shy giggling lady that told everything with a big smile. A sharp contrast to her driving style though, because she speeded from temple to temple. 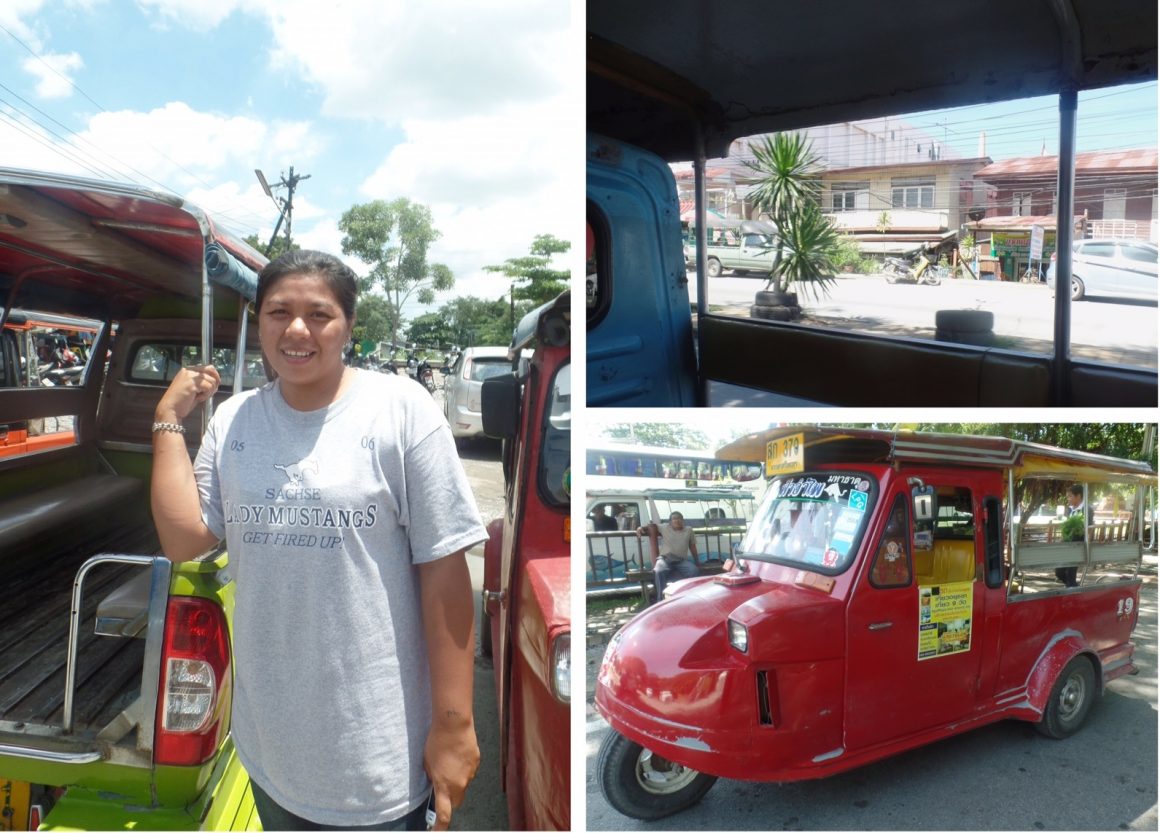 Have you ever been to Ayutthaya? 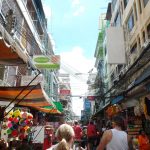 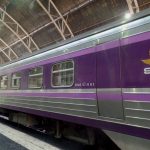 What is it like sleeping in a Thai night train?