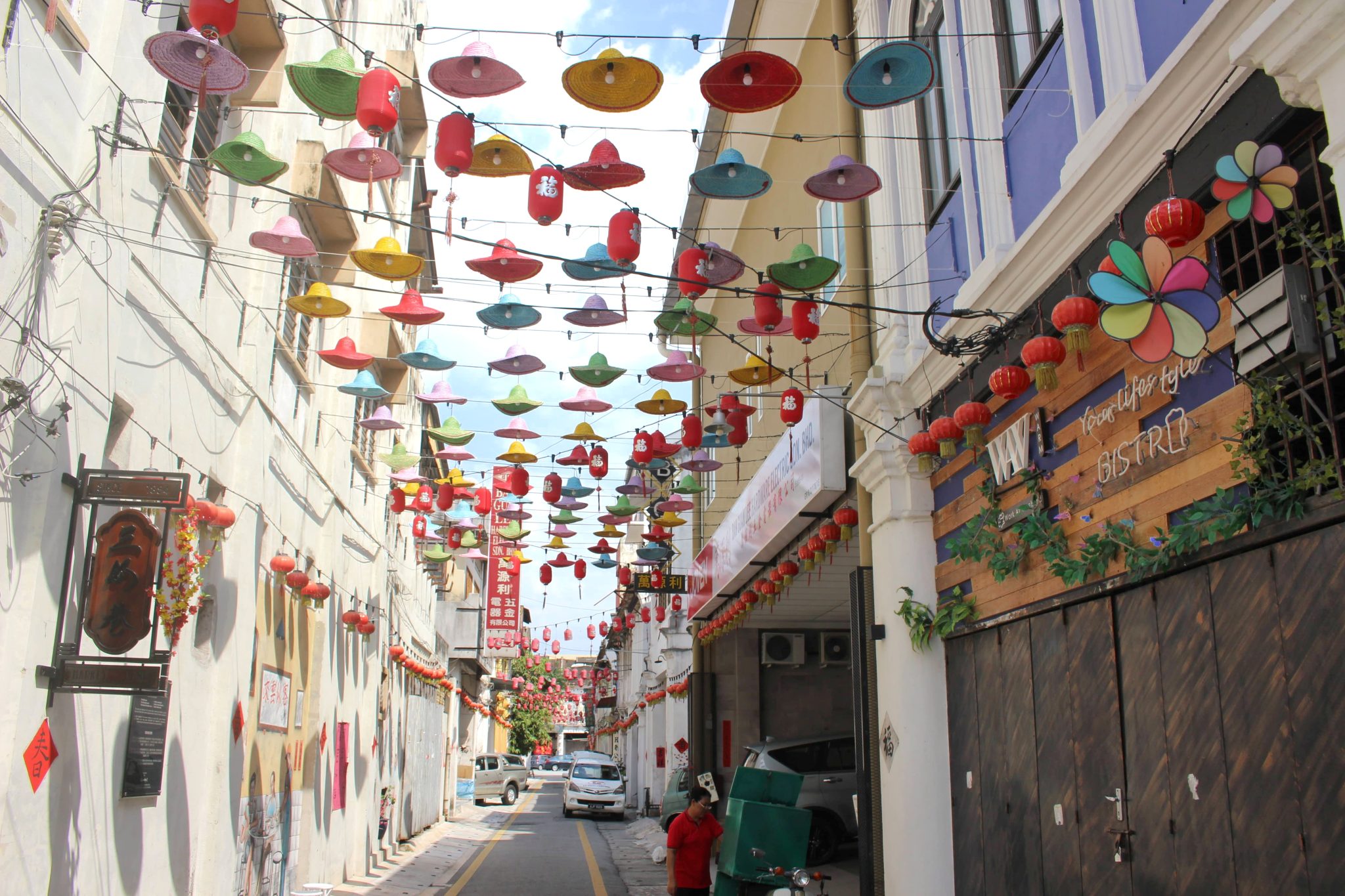 Visiting a place with no expectations and getting blown away? I had that with Ipoh in Malaysia. Of course, I had read something about it, but I didn’t think it would be that exciting. But guys, what a great city! I really have a soft spot for small cities. Places that do not feel too big or touristy and have plenty to offer. That’s Ipoh. It has a similar vibe as Georgetown (in Penang), but on a much smaller scale. In this blog post, I am sharing some great Ipoh things to do and tips.

If there’s street art, I’m there. Most Malaysian cities have street art and Ipoh is no exception. So look forward to seeing huge murals and cool 3D paintings. Combine that with colorful historic buildings and you’ll just keep shooting photos. At least that was what I was doing.

Where to find the best street art in Ipoh?

Simply put, there are two street art locations: Old Town and New Town. In Old Town, I liked the coffee-themed walls. There is the ‘Uncle with White Coffee’ mural. Uncle is a courtesy name for older people, and Ipoh is known for white coffee. Coffee served with sweet condensed milk and often sugar as well. The other painting is called Kopi-O and shows the local take on takeaway coffee, which you drink from a plastic bag. Also, the 3D paintings are very cool. Make sure to see the trishaw, a real bike with a painted man and garbage bags.

In New Town – on the other side of the Kinta river – hunting for street art is made easy. All street art is collected in one street: Mural Art’s Lane. The walls on both sides of this lane (and some side alleys as well) are painted with children playing hide and seek, typical Malaysian traditions, and more.

Ipoh’s Old Town offers more things to do. Take the Concubine Lanes for example. Built by the wealthy 19th-century businessman Yao Tet Shin after a major fire burned down the old city. Some of the newly built houses were presents to three women: Shin’s wife, his first mistress, and his second. Today these streets are called Wife Lane, Concubine Lane, and Second Concubine Lane (also called Market Lane). Concubine Lane is the busiest with many shops and restaurants. The other two streets are quieter and can be recognized by the murals showing small shops. A reminder of the former shops on these streets that had to pay rent to one of Shin’s three women.

Want to explore Ipoh with a guide? Check out this Ipoh City Tour with cave temple visits.

Other historic sites in Ipoh include Birch Memorial Clock Tower, the train station, and the city hall. All memories of the colonial period under British rule. The name Birch refers to James Birch, the first British resident in the state of Perak, who was assassinated in 1875 while he was taking a bath.

Ipoh is a hipster city and Kong Heng square is the perfect example. From Thursday to Sunday (days change regularly) a crafts market is organized here. The shop owners sell all kinds of handmade products. So if you want something unique, this is the place. The square itself is surrounded by rundown and overgrown buildings, which gives the whole place an alternative vibe. When I was there, we also had a bite to eat at Plan B. Recommended!

Another cool place is the shop BookXcess, around the corner from Kong Heng square. This used to be a bank but is now turned into a maze-like bookstore. The place is divided into many different sections, each with its own theme. Even the old money vaults in the basement have bookshelves now.

Ipoh is also known for its huge collection of cave temples. Around the city, you can find more than 30 shrines, all built in limestone hills. In this article, I will talk about two major ones. The first is the Sam Poh Tong temple. Discovered by a 19th-century monk from China who traveled through the region. This temple has several layers. Downstairs is the gate, the gardens, and a large pond with koi carp. The stairs go up to the cave above in which several large and small Buddha statues are placed. But this is not the real highlight, because the cave opens onto a courtyard with a beautiful red-orange pavilion, limestone hill background all around, and a big turtle pond. These little animals stand for happiness and are often donated or fed by visitors.

Tip: be mindful of the opening hours. The temple closes at 2:30 p.m.

On the road where Sam Poh Tong is located, there are also two other temples that can be visited. Ling Sen Tong en Nam Thean Tong. Especially the first one stuck with me. The bright colors and the cartoon-like statues make it look more as a children’s theme park than a temple.

5. Take a look at Mirror Lake

Done at Sam Poh Tong temple and have time to spare? Then continue on to Mirror Lake. This is a hidden lake surrounded by limestone mountains. Not many tourists seem to come here. When we were there, we only saw three other people. It’s also not that easy to get to if you don’t have a car. We walked there from Sam Poh Tong temple. Thirty minutes on a boring and busy road. There was a faster route but it was guarded by a pack of barking dogs. We didn’t dare to go there.

The second cave temple I visited was the Perak temple. Discovered again by a traveler from China. This time a couple that turned the cave into a sanctuary. I found this temple even more beautiful than the Sam Poh Tong. Take the red-orange entrance gate, set against the limestone hills. Stunning! The cave inside has a large Buddha statue and the walls are painted with frescoes and all kinds of fairytale-like creatures. From the cave, you can also climb further up for a phenomenal view over the city. Worth it, though climbing almost 360 steps in sweltering heat is intense. On the way back I noticed the impact when I sank through my legs with scraped knees as a result.

I ended up here by chance. At Mirror Lake we got talking to another tourist and he continued with his car to Gunung Lang Park. If we wanted to join him. It sounded like a good plan to us because taking a bus there was impossible.

Gunung Lang Recreational Park is a man-made park between the limestone mountains with a large lake and a waterfall. The main thing to do here is to take the boat to the recreational area. There you can walk around, view traditional huts, climb watchtowers and explore a mini zoo. The vibe is very relaxed, but would I recommend it: no. It is okay, but you will not miss much if you don’t visit it.

Where to eat & drink in Ipoh?

Ipoh is a diverse city, which shows in its offer of restaurants. Here are my recommendations for vegetarian/vegan friendly places to eat:

Vegan Delights: a restaurant with a social mission. They provide job opportunities for Deaf staff. So eating here not only means good food but also learning some sign language at the same time.
A Jie Cafe: a super local café. When we stepped inside, all eyes were on us. It was clear that not many international tourists came to this place. But don’t let that scare you, because it is a nice place to try a few Malaysian dishes, such nasi lemak, laksa, kuih and kaya toast.
Lodge 163: the ladies here (three generations: grandmother, mother, and daughter) are super hospitable and they have a number of vegetarian options on the menu.
Ipoh also has a Little India with many restaurants. Personally, I can never get enough of Indian cuisine.

Where to stay in Ipoh?

We stayed at Grayhouse Soho. A nice place within walking distance of the center and a communal kitchen so you can start the day with your own breakfast. The room was fine, but a window would have been nice. Inside we lost track of day and night. Looking for a more upscale place to stay? Maybe M Boutique Hotel is a good fit for you, rated with an 8.1 out of Booking.com. 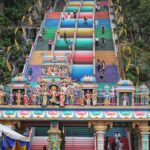