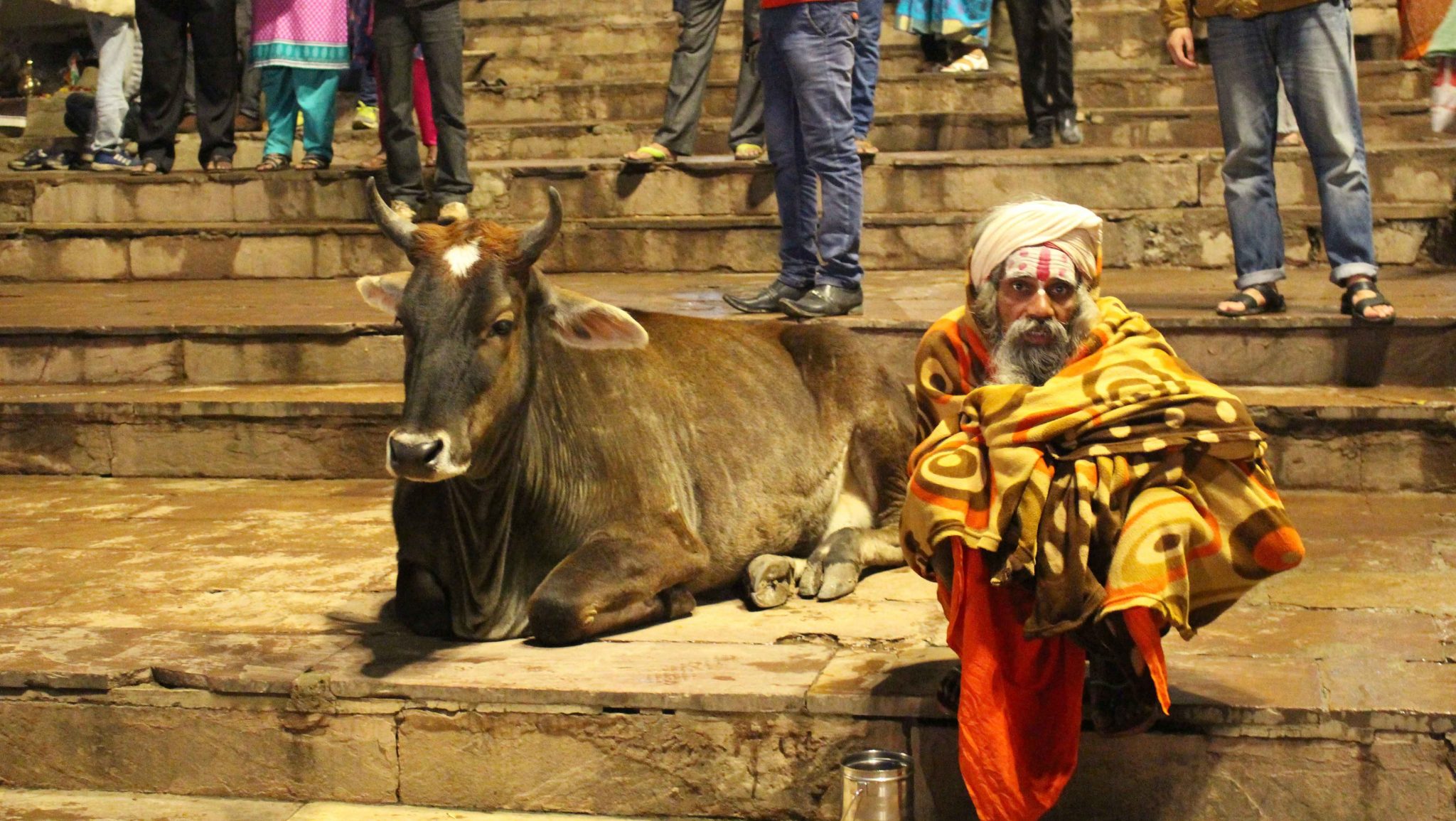 A speed date with Varanasi: 24 hours in the holy Hindu city

When planning our trip to India the city of Varanasi was something that had to be in our itinerary. Without a doubt we had to visit the most holy city of India and a popular pilgrimage stop. People from all over India come to this city to pray, bath and die near the holy Ganges. It is thé spiritual destination, but it also a city with sharp contrasts. Colorful saris versus the dark water of the Ganges, flowers versus rotting stanch and wispering prayers versus loud honking. It is not a city everyone can handle, but I was up for the challenge. Unfortunately, our visit to Varanasi was cut short. Our plan was to visit Varanasi for 2,5 days, but this turned out to be only one day. A couple of things spoiled the trip: a lot of rain and a very long train ride to Varanasi. How did I deal with these setbacks and what did I manage to see in Varanasi? I will tell you in this article.

We traveled from Agra to Varanasi by train and this turned out to be a good lesson of what the train system in India is like. Lesson 1: the train system is dated. Since the independence of India (in 1947) it hasn’t be modernized. This meant dated tracks. Lesson 2: the trains move along super slow and stop without a reason. This all resulted in the longest travel day ever.

On the night we had to leave Agra the people of the homestay in Agra told us that the train to Varanasi is known for its delay. And shortly after that, we got our first update: two hours dealy. Not too bad we thought. The second update was a five hour delay. Ai, that was quite a long time. The third update said a seven hours dealy. How long is this going to be?! We decided to go the train station, so that we were close in case the train arrived. Eventually we left Agra at 3 am in the morning instead of 7 pm: an eight hour dealy. The train itself stopped a lot and the delay got even worse: 12 hours! Instead of arriving in Varanasi at 10 am we arrived at 10 pm in the evening. One whole day was gone. I was not happy.

Hello Lucknow! For some reason we spent a lot of time at this train station waiting for our train to leave.

Moreover, our stay in Varanasi was dominated by a lot of rain. Between all the showers we spent one day in the city. It was a true speed date with Varanasi. I will show you how I spent these 24 hours.

The first morning in Varanasi started out early. We wanted to take a boat ride over the Ganges river and see the city awaken. So we entered the streets while it was still dark and walked along the river banks with a local guide. It was a foggy and cold morning, but it was already busy. People were praying, setting flowers and taking off their clothes to bath in the Mother Ganges. The water is considered to cleanse the soul and sins. We stepped aboard a wooden boat and sailed along the ghats (banks) that filled up with more pilgrims going down into the river for a ritual bath.

Slowly, we approached the infamous cremation ghats where the deceased are publicly cremated. The one after the other was carried inside the ghats and burned on the wooden piles. The remains go into the river. Our guide told us that the bodies need to be cremated within 24 hours, so the bodies are often rushed through the streets to make it. But not everyone is cremated. The saddhus, pregnant women and young children are considered as pure and go directly into the river without cremations. During our boat ride we also saw that not only human bodies are thrown into the Ganges. We came across a deceased cow. The rotting smell was almost unbearable. 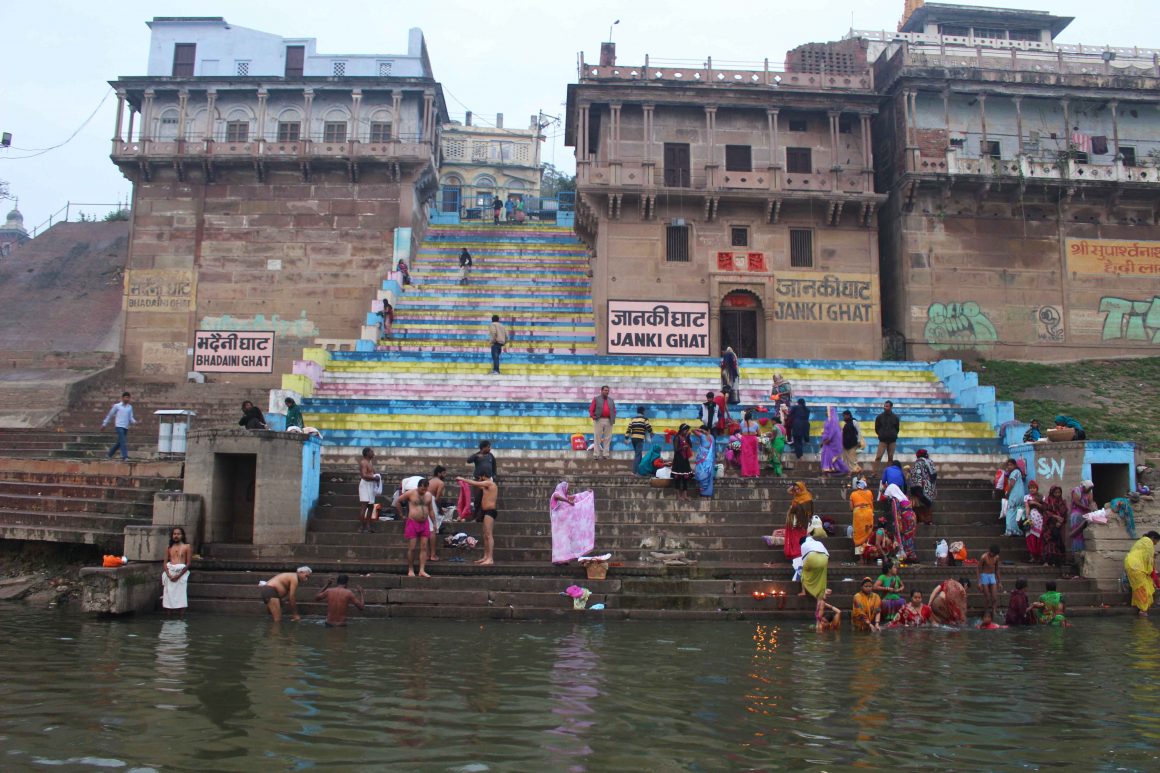 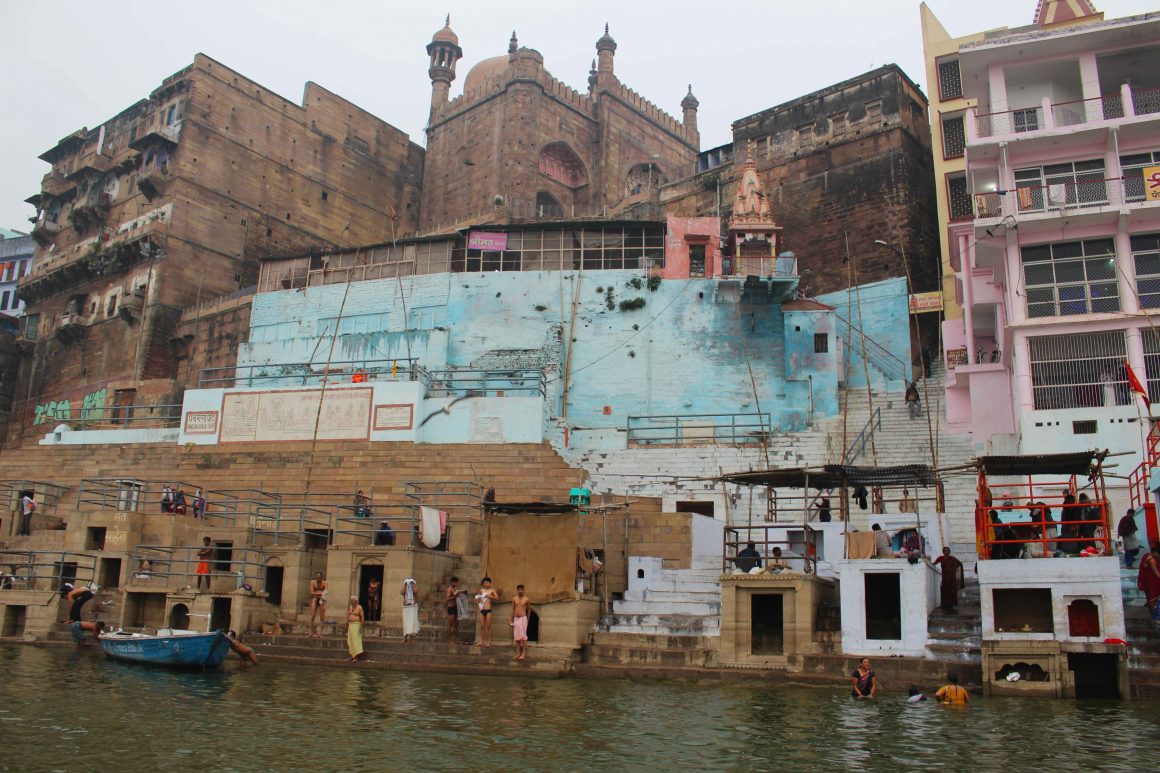 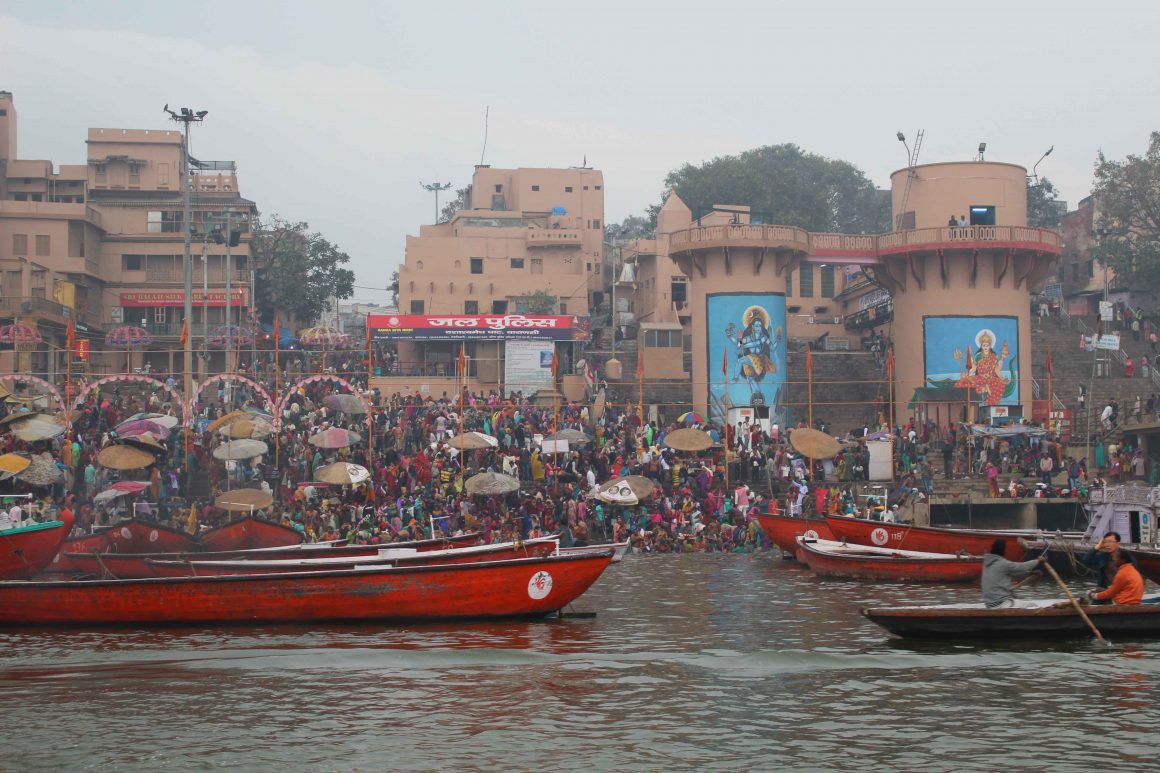 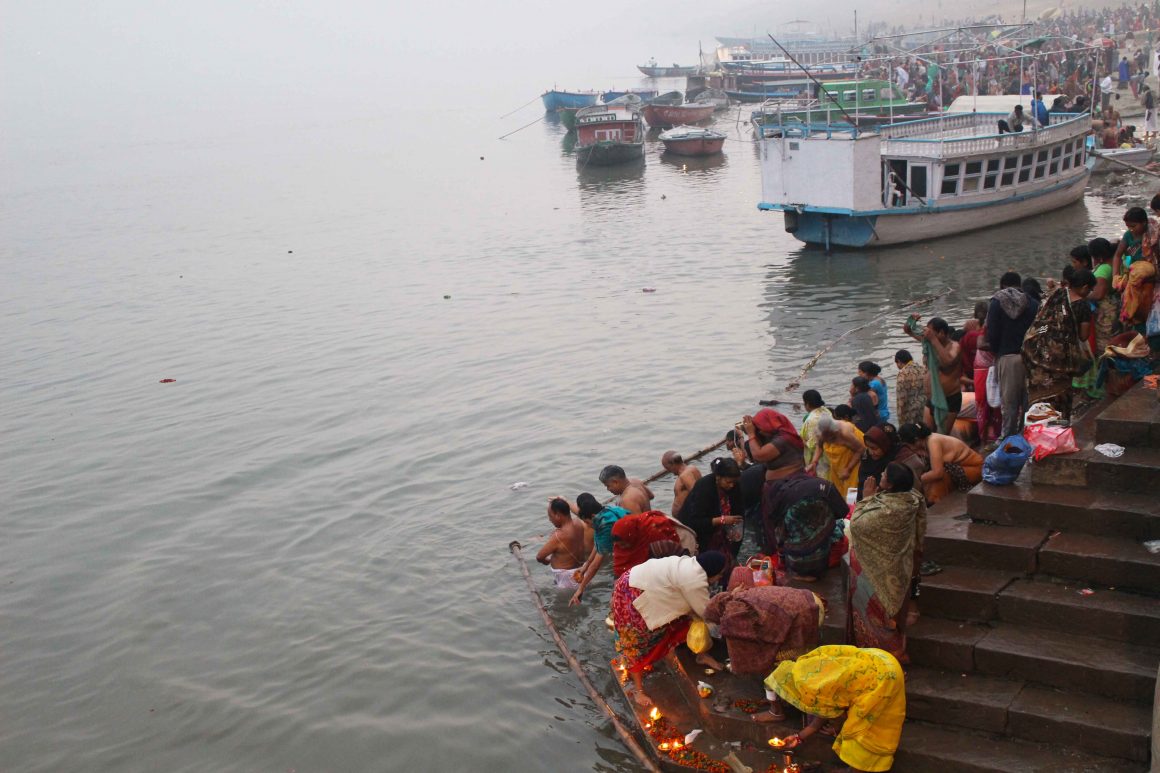 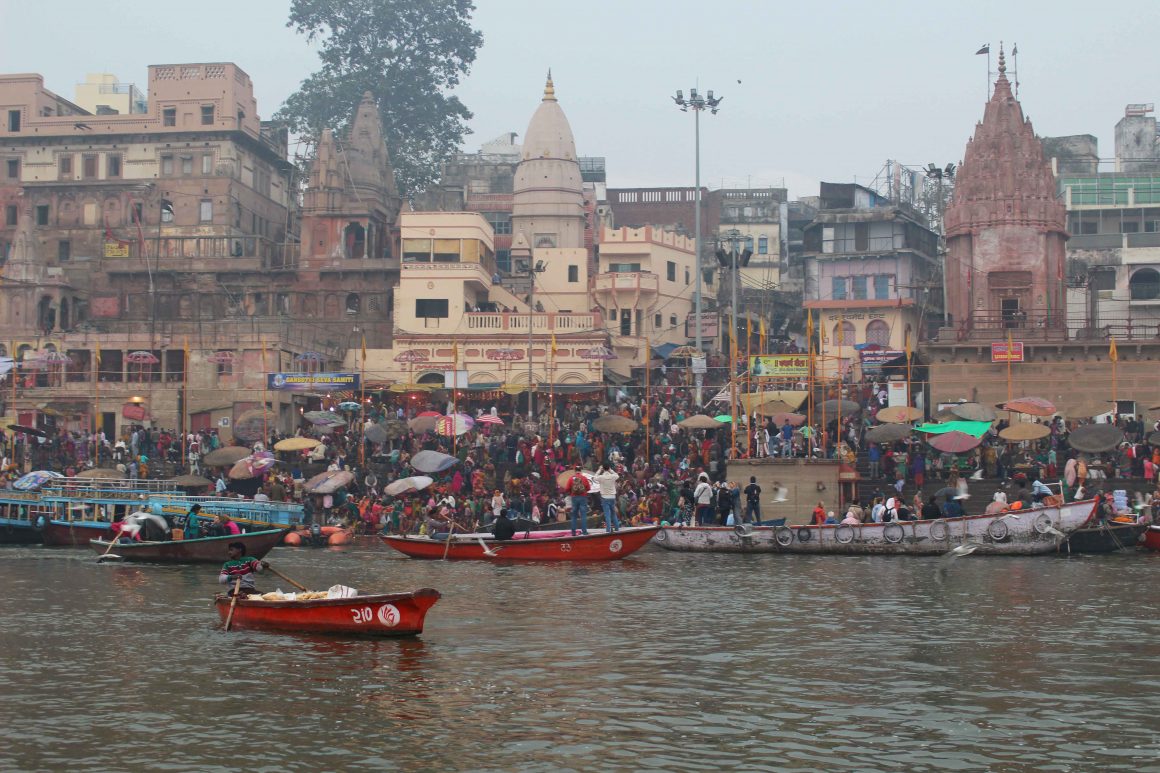 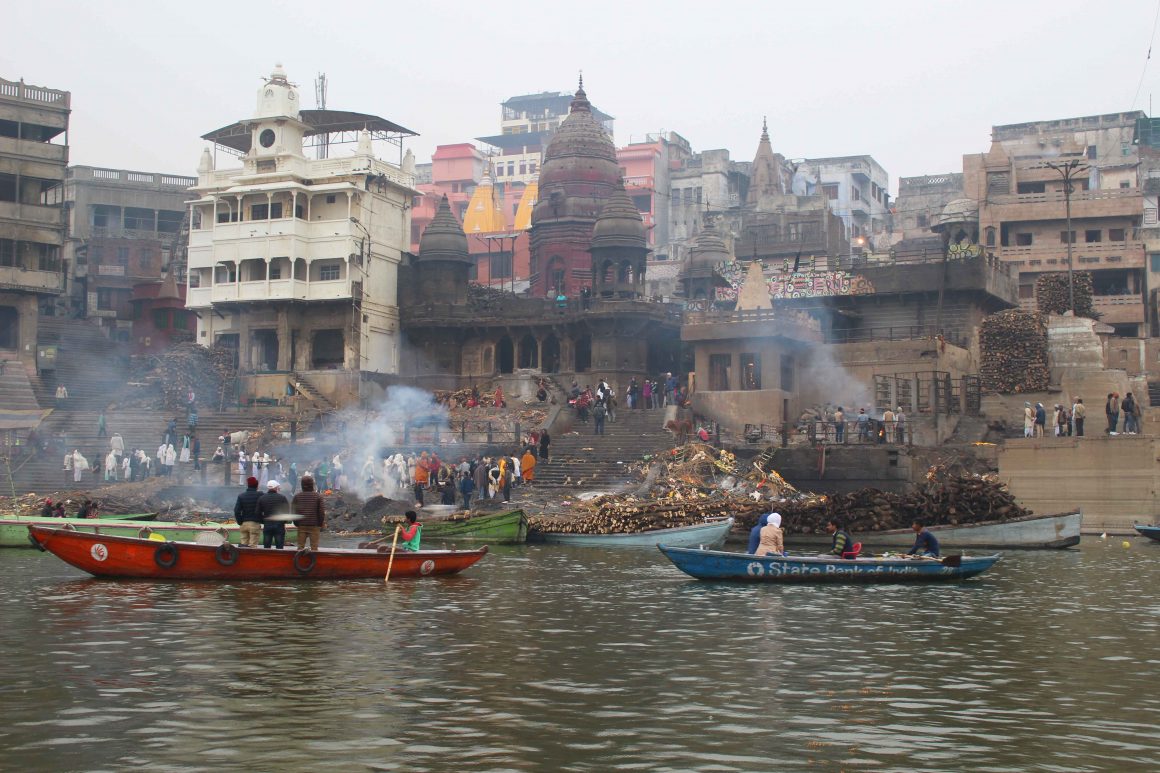 Walking along the most beautiful ghats

Ghats are the steps that descend into the Ganges river. There are more than 100 ghats in Varanasi, the most well-known are located between Assi ghat and Raj Ghat. Assi Ghat is an important pilgrimage stop for worshippers of the lord Shiva. There is a big stone pillar under a tree where people stand still and pray. Not far from Assi Ghat there is the Janki Ghat. Personally, I liked this ghat the best. It has lovely colorful steps, it is in good condition and it’s not that crowded. Other beautiful ghats are the Jain Ghat with the huge Swastika painting  (swastika is a symbol in Jainism and Buddhism of good fortune), Chet Singh Ghat with the beautiful eighteenth century temple and the Kedar Ghat with the colorful Hindu temple in the back. 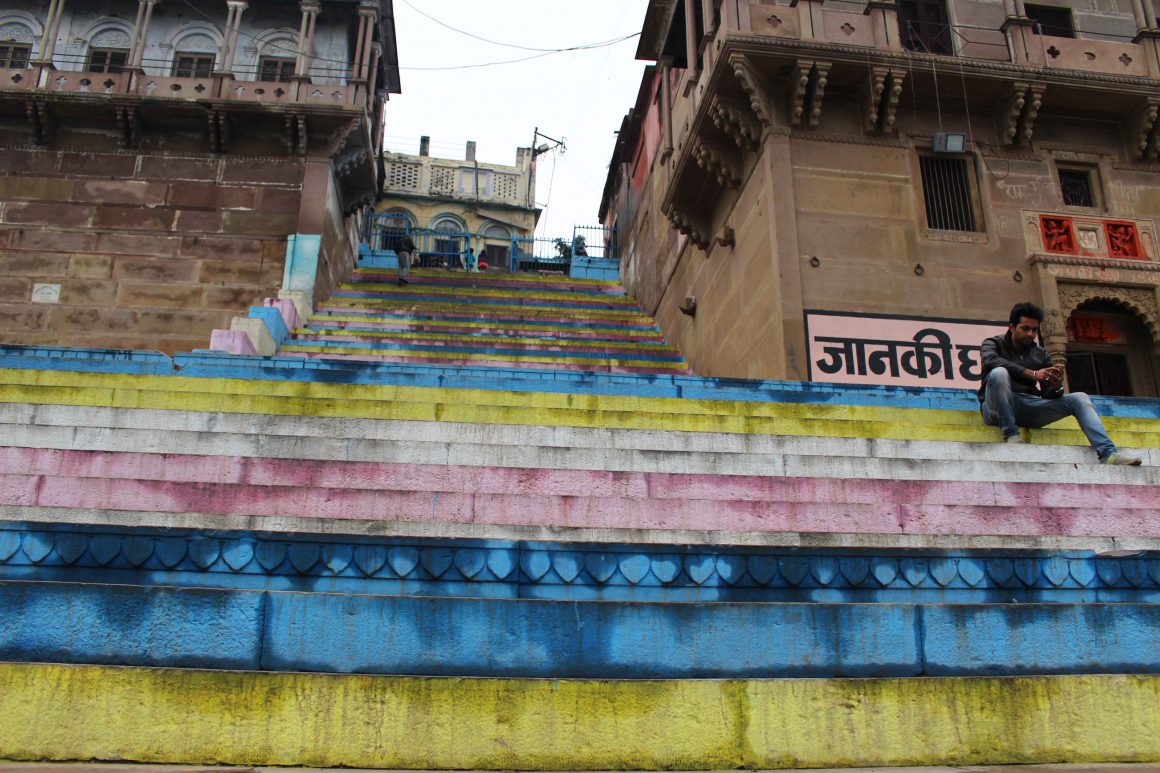 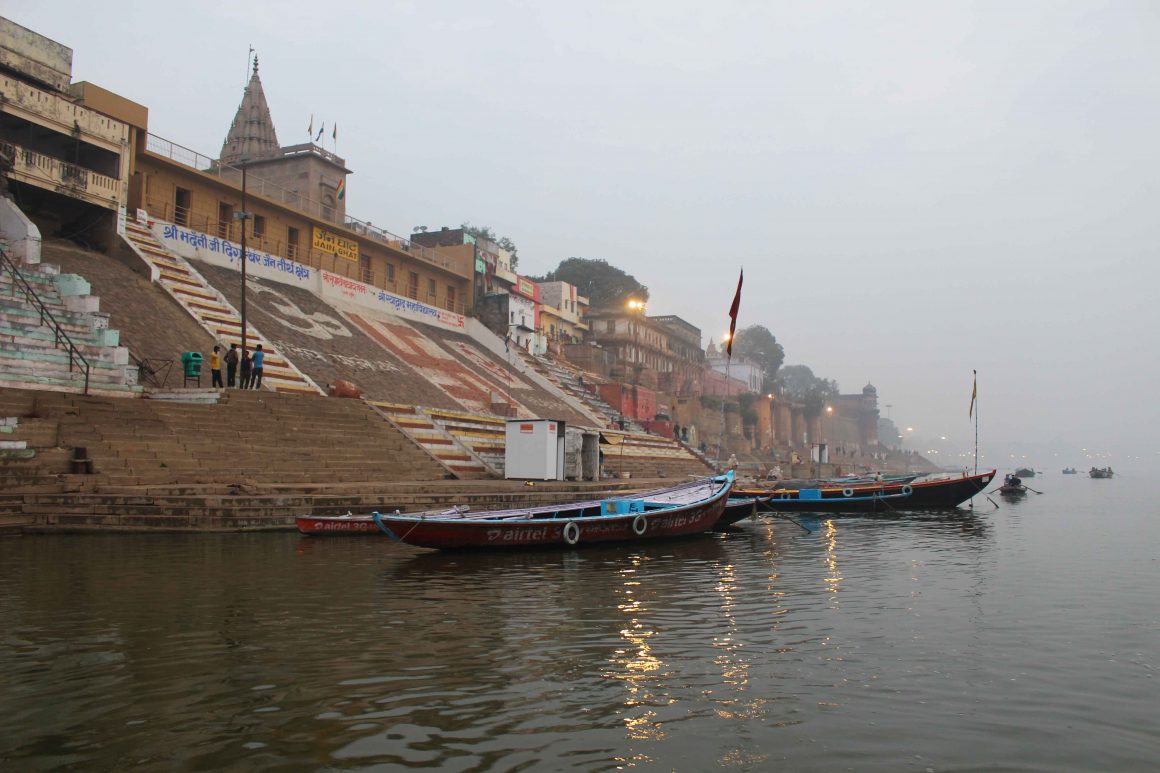 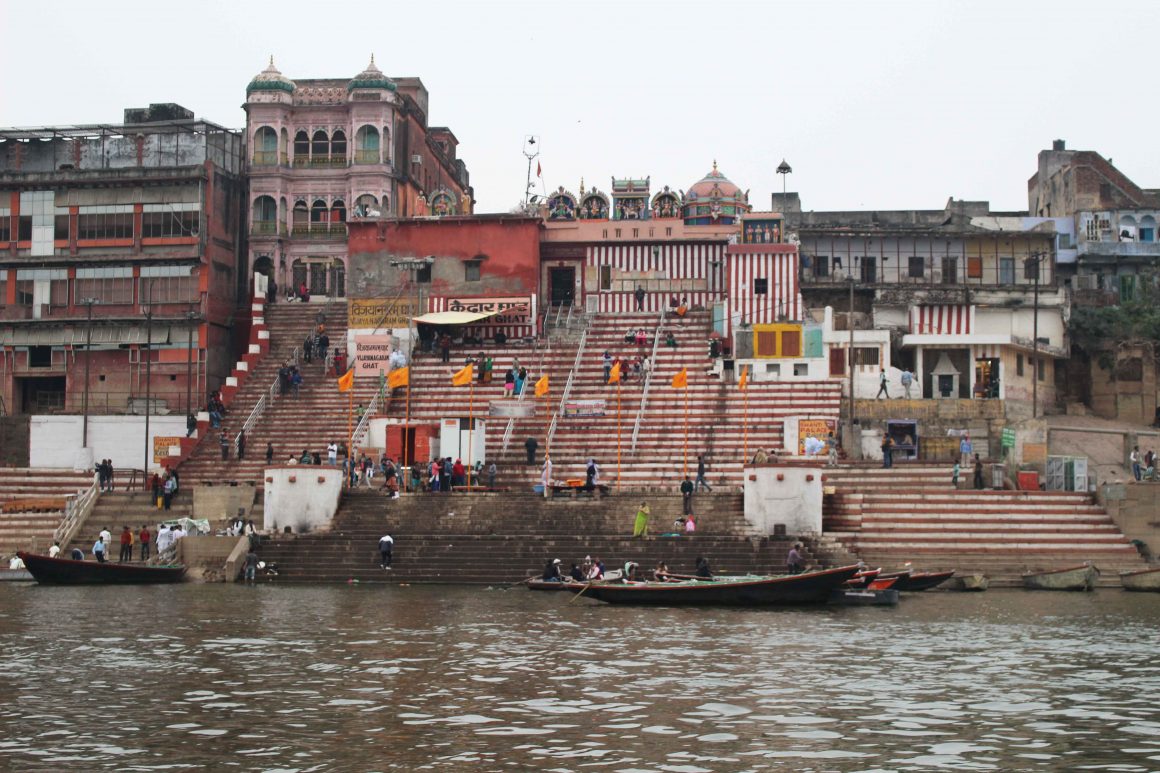 The spiritual city of Varanasi has more to offer than just the Ganges river, pilgrims and ghats, I also found street art in this city. I did not expect this in the most holy city of India at all, but still it was there. Of course, the street art in Varanasi often had a spiritual dimension.  It were images from Hindu gods, old sagas or holy rituals, painted in bright blue, orange or red colors. Along the Ganges river there is already a lot to see around the ghats and water towers. But I also saw street art around Nagwa Road, near Assi Ghat. From small tucked away paste-ups of children to a big new mural. They were still painting it when I passed it. I loved watching the process. 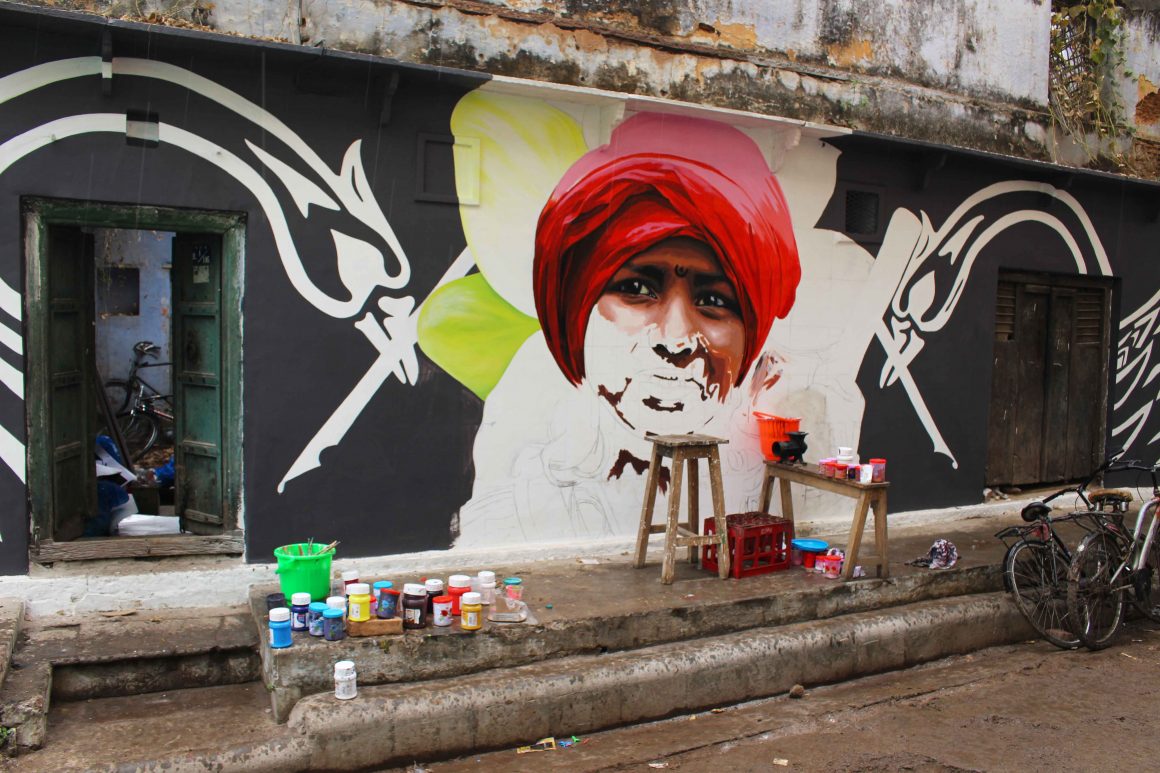 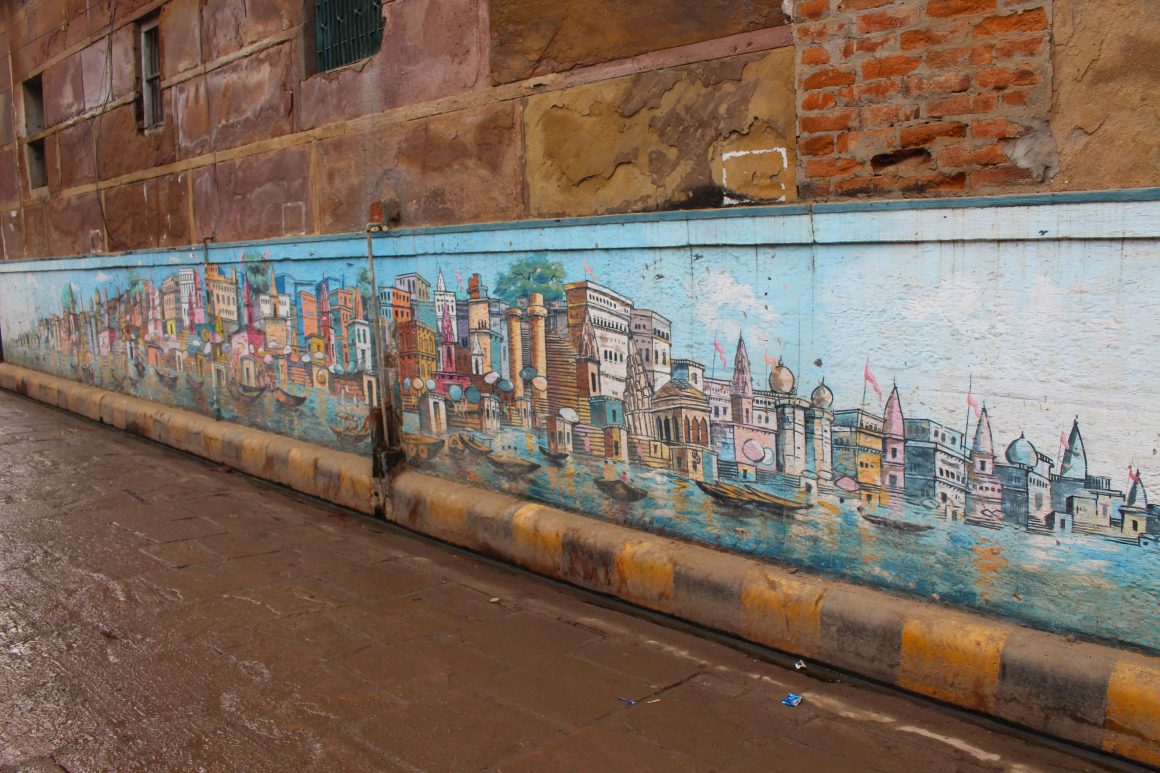 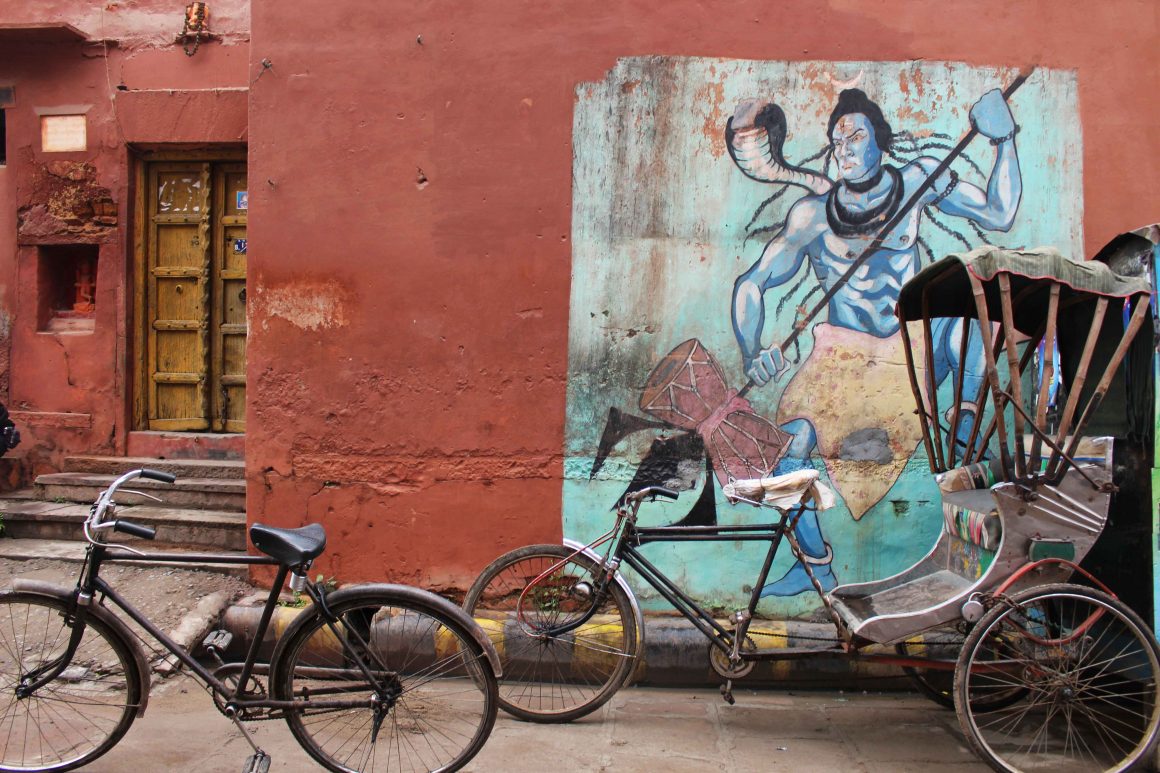 Every evening (at 6 pm in the winter and 7 pm in summer) the Aarti ceremonies take place at the Ghats. This is a holy ceremony where priests thank the god Ganga for bringing life. The ceremony takes place with music, singing and burning scents. There are actually a couple of ceremonies taking place along the Ganges, but the biggest is at Dashashwamedh ghat. Some people choose to watch the ceremony from a boat, but I liked it more from the banks so I could watch up close. I could sit with the locals and see the dedication on their faces. Unfortunately, I also saw some tourists going out of their way to snap the perfect photo and standing in front of the Hindus. 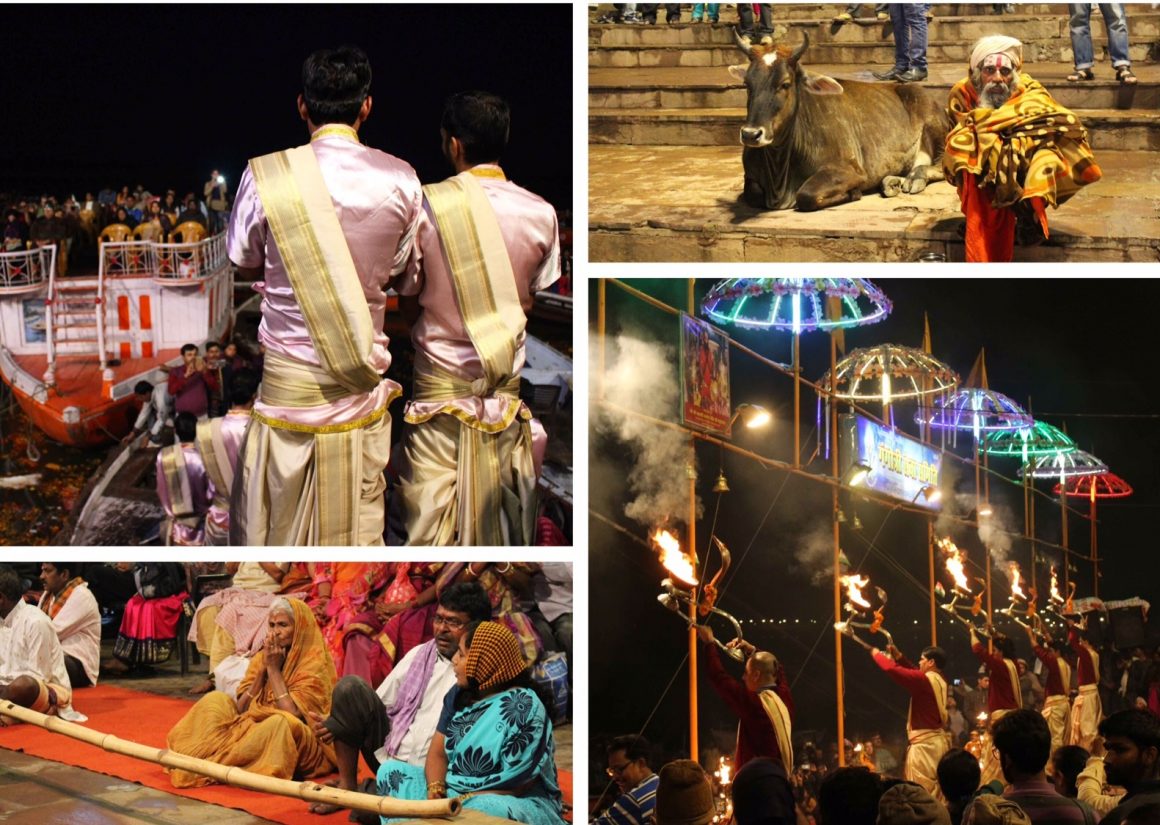 Despite the fact that my visit to Varanasi was too short, I still liked what I saw. I would love to have a do-over to explore more of the city. Preferably with a bit more sun, join a yoga class at the river banks and drink a fruity lassi at the Blue Lassi Shop. Until the next time!

Would you add Varanasi to your India itinerary? 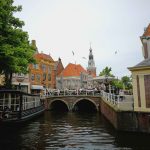 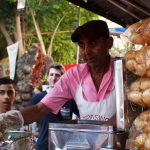