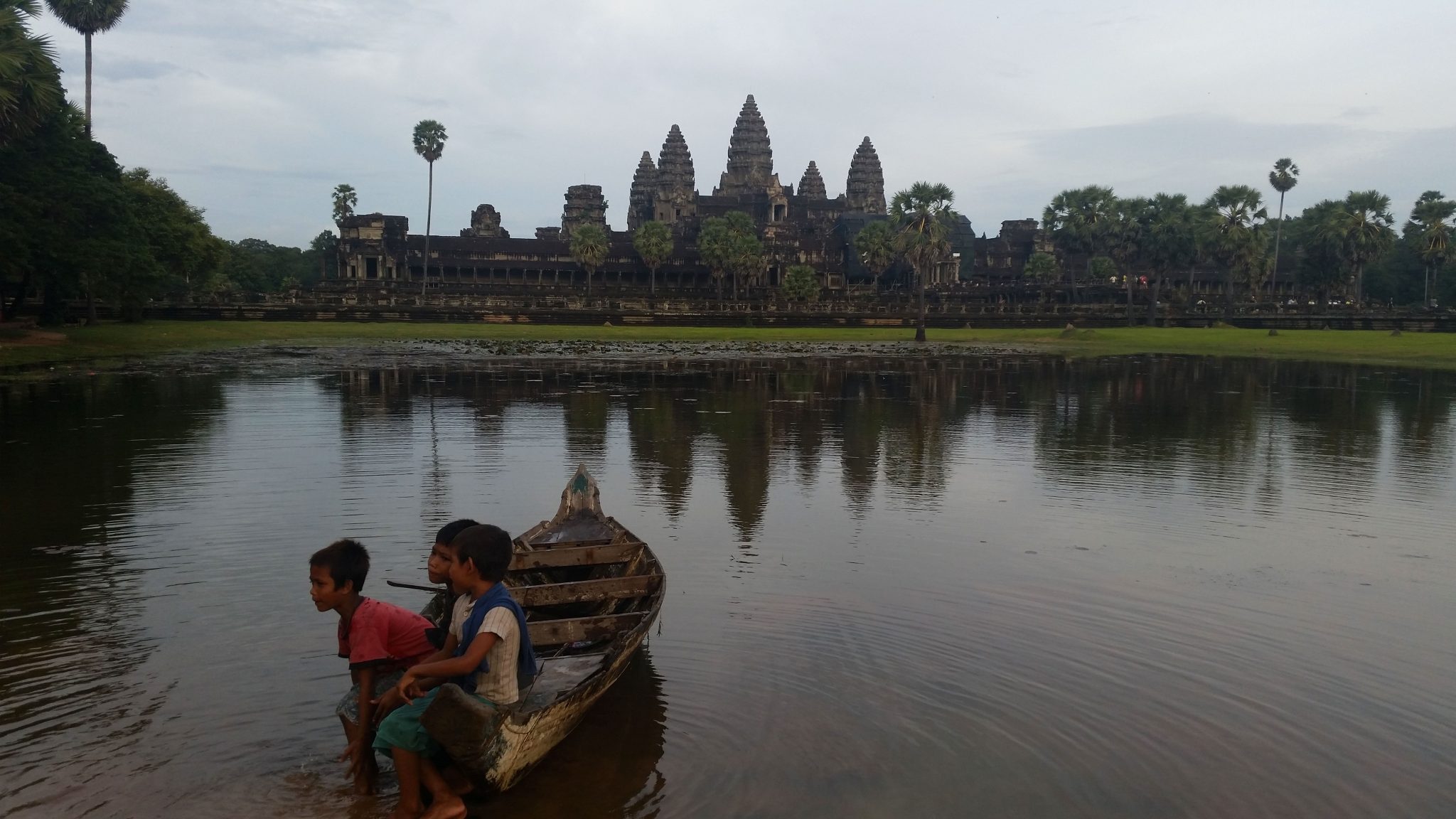 Cambodia: my tour around the temples of Angkor

It’s the most well-known sight of Southeast Asia: the ruins of Angkor. For five centuries this was the most important city of the Khmer empire and was at its peak a home to 1 million people. Over 10 kings worked on this city, all with the intention to make it even bigger and better. After the fall of the Khmer empire in the fifteenth century, the city was abandoned. Nature took over and the temples were overrun with roots, trees and moss. The holy city disappeared into a green jungle. For five centuries the world didn’t know of its existence, until a French discoverer revealed the temples.

Today the ruins are the mean reason tourists visit Cambodia. It’s thé national pride. That’s why a temple appears on the national flag and you can order an Angkor beer in every restaurant. This pride is certainly justified. The Greek and Roman temples disappear when you compare it to the vastness of the Angkor. In total there are more than  more than a hundred temples spread out on an area of 400 square kilometers. You can easily spend a week exploring the ruins. Of course you’ll have to pay a price for this. A seven-day pass will cost you 72 US dollars*. In Asia that’s pretty expensive. Other options are the one-day pass (37 US dollars) and the three-day pass (62 US dollars). I chose the second option and bought a three-day pass.
*These are the new prices from August 2016 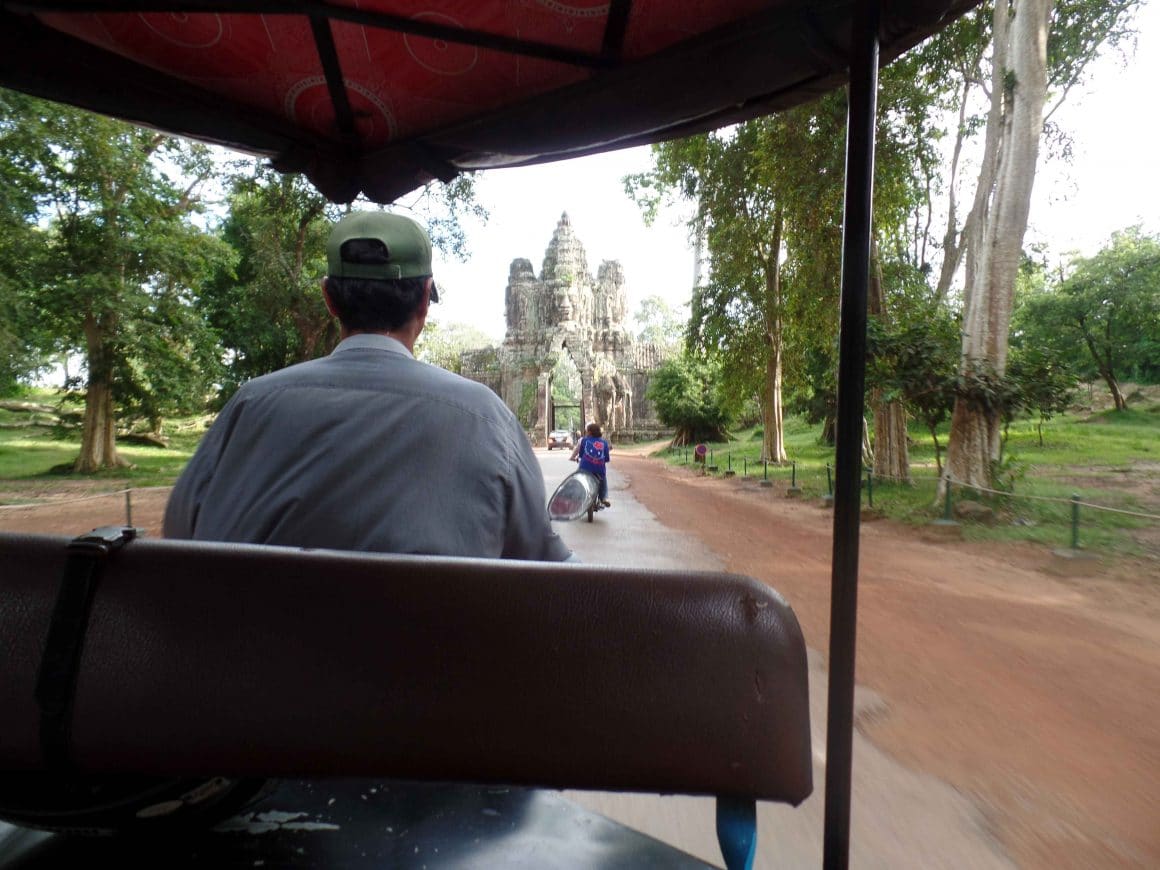 You can discover the temples by tuk-tuk, which is an easy, quick but expensive option. You can also opt for the Dutch way, the bike! I experienced both and I must say I prefer the bike. Maybe it’s the Dutch blood talking, but the tuk-tuk really took the freedom and spontaneity away. And so on our second and third day we rented a bike in the nearby city Siem Reap. With a map in our hands and the intention to visit three to four temples a day, we hit the road. Curious which route we took? Keep on reading.

After a 6 kilometer ride we arrived at the main temple of the Angkor, the Angkor Wat. Angkor means holy and Wat means temple, so this is the Holy Temple. A lot of travel guides advise you to visit the Angkor Wat at the end of your route, but as stubborn as we are we visited the Angkor Wat at the beginning of our tour. We’re here now, so might as well see what the fuss is all about. And I must say, this temple is amazing. The Angkor Wat is a gigantic chapel decorated with three prangs and several altars, corners and bays. During the day it’s already a magnificent sight, but make sure you return here at sunrise or sunset. The sight of the sunbeams glowing along the towers of the Angkor Wat is truly amazing. 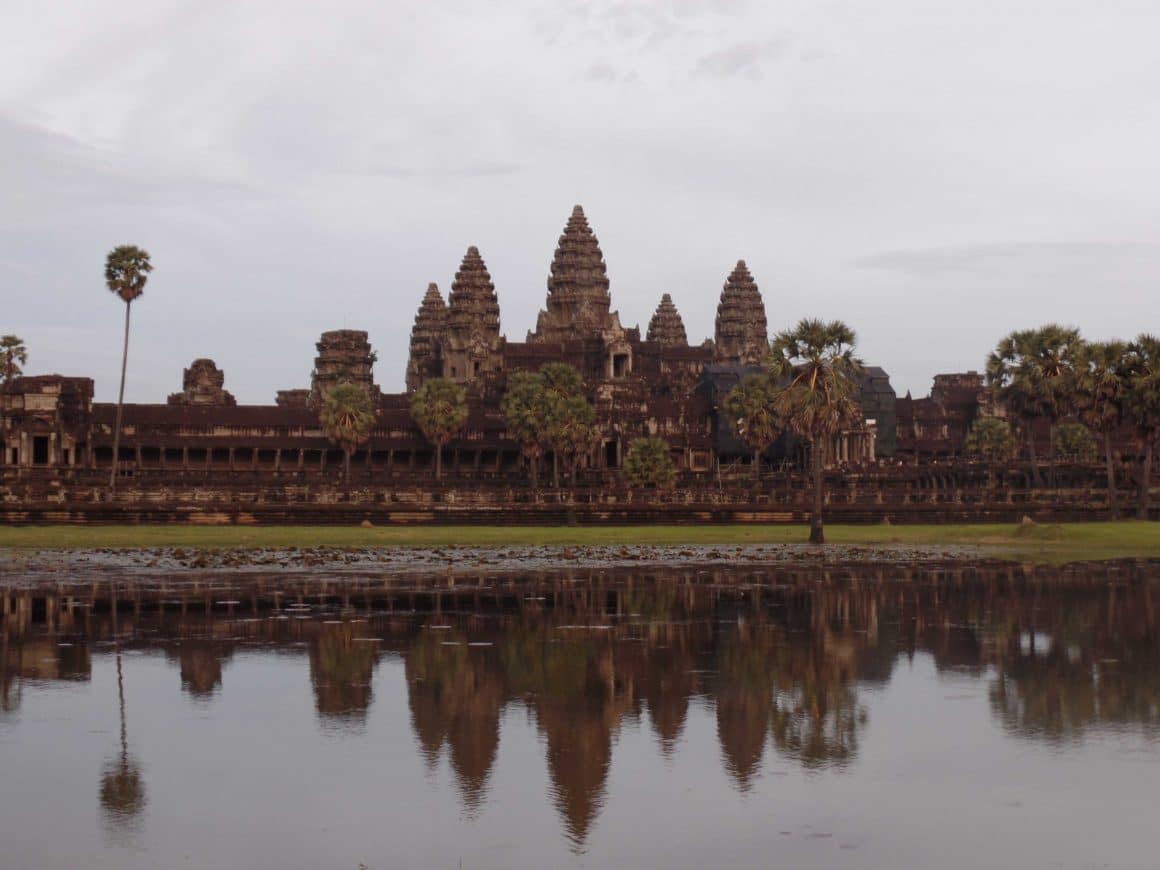 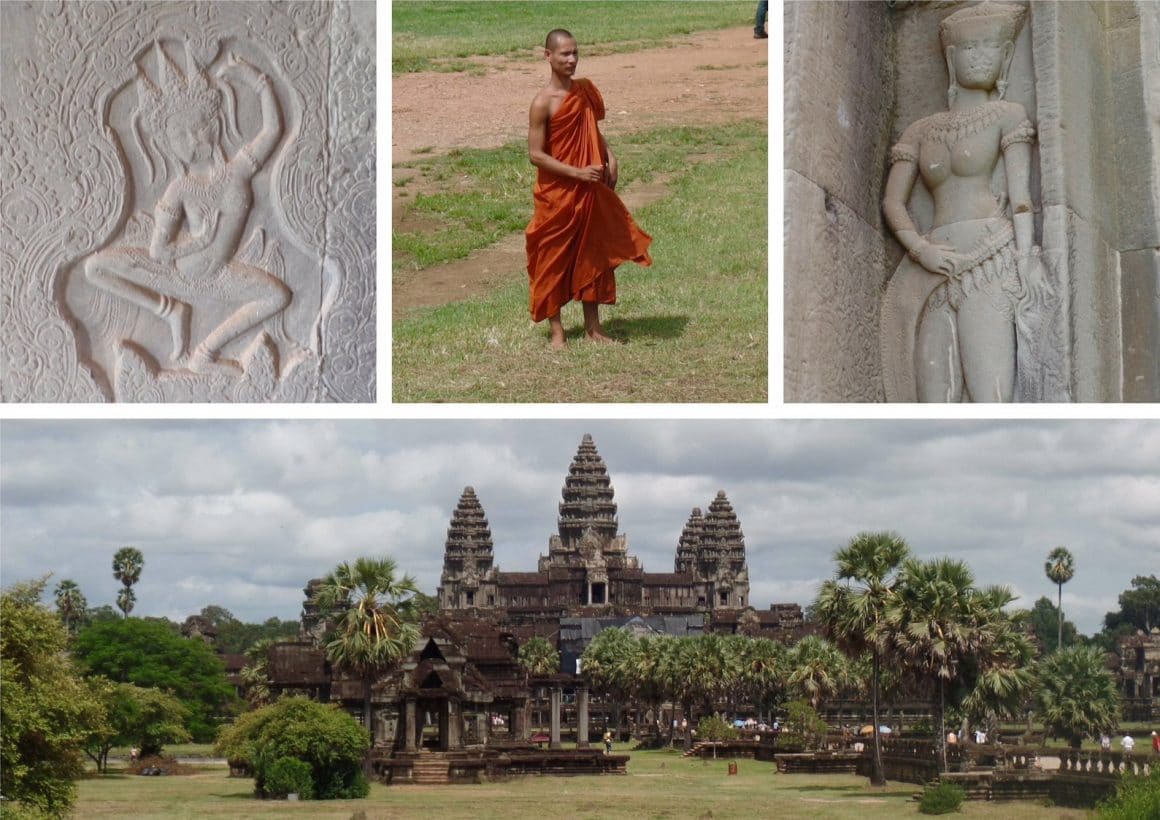 The Angkor Wat is not the only impressive temple. Just wait as you arrive at the one of the five gates of the Angkor Thom, a 15 minute ride from the Angkor Wat. The top side of the gate is decorated with four stone faces, each looking into a different direction. And these faces are only a sneak peek of what is about to come. Inside the walls of the Angkor Thom you will see the magnificent Bayon, a temple with 37 towers and 200 gigantic stone faces. Everywhere you look, you will see faces looking back. It’s stunning to see how this sight survived all these centuries. A lot of people consider the Angkor Wat as their favorite, but I definitely prefer the Bayon. 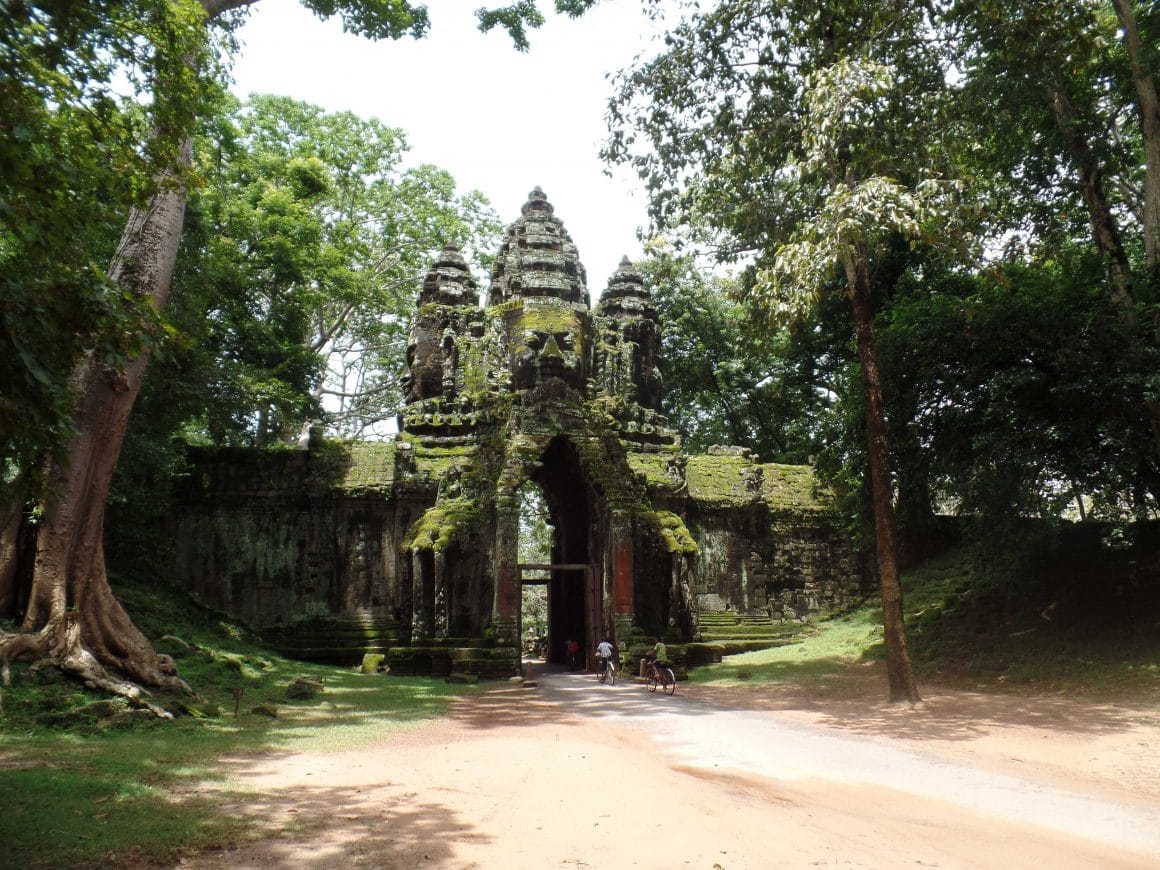 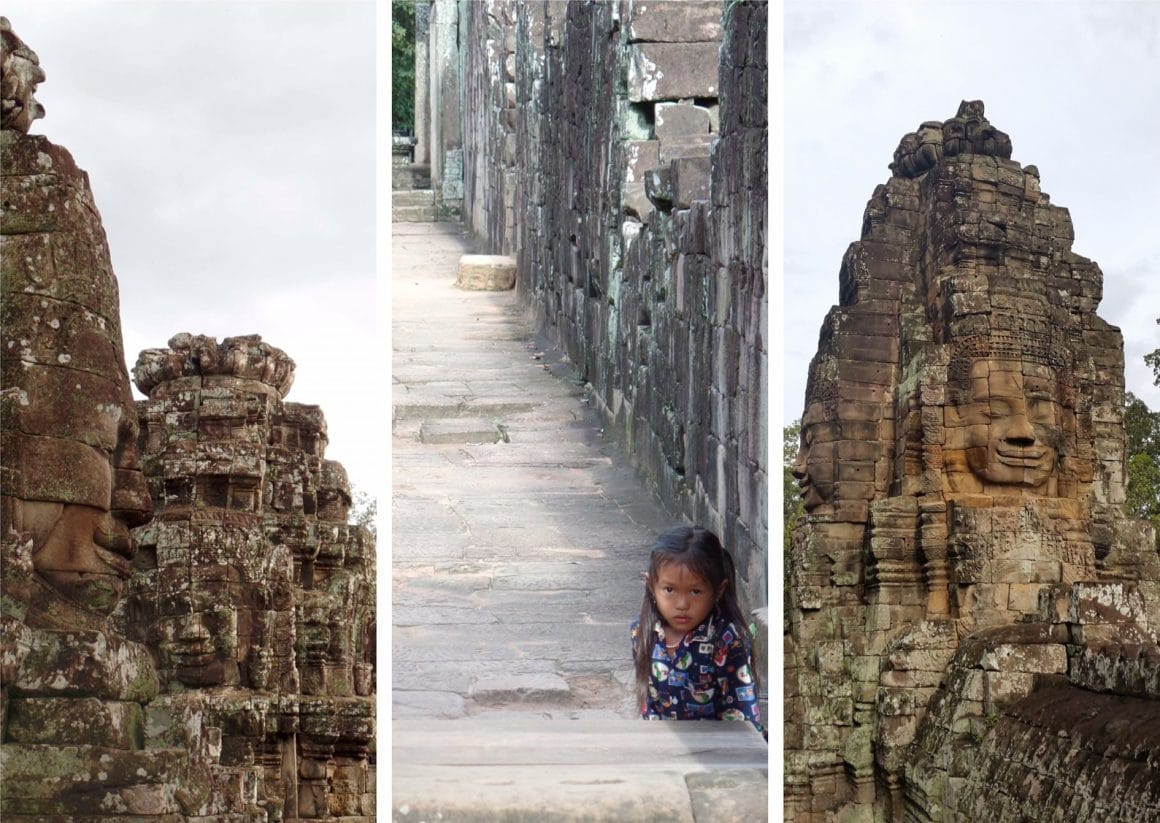 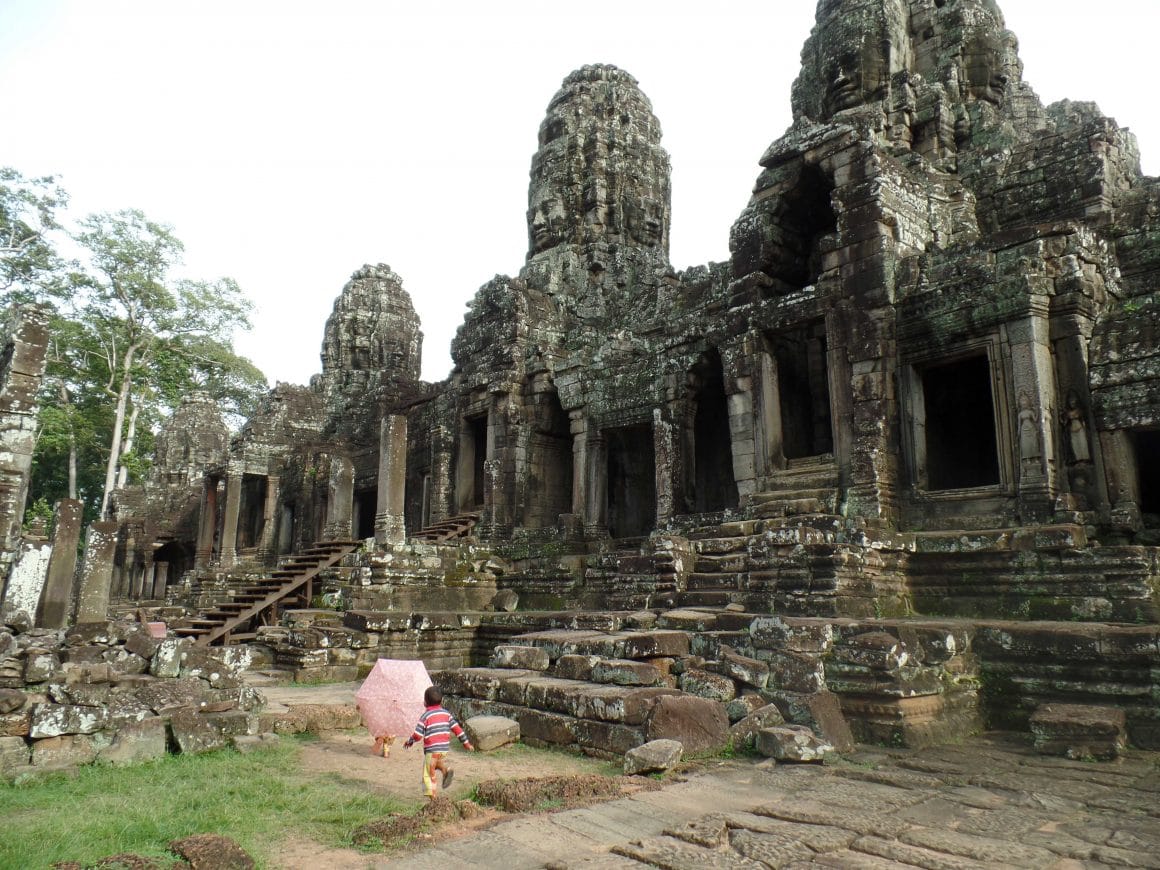 As we leave the eastern gate of the Angkor Thom we arrive at the Ta Keo after a 15 minute ride. This is the temple they started to build in the tenth century, but never got to finish. The king died and after a difficult power struggle the temple was struck by lightning. They decided that the Ta Keo was cursed and no one dared to finish it. The result is a massive temple with five layers but the details, the inscriptions and the (finished) statues are missing. Maybe this is not the most beautiful temple in the area, but its vastness definitely makes an impression. 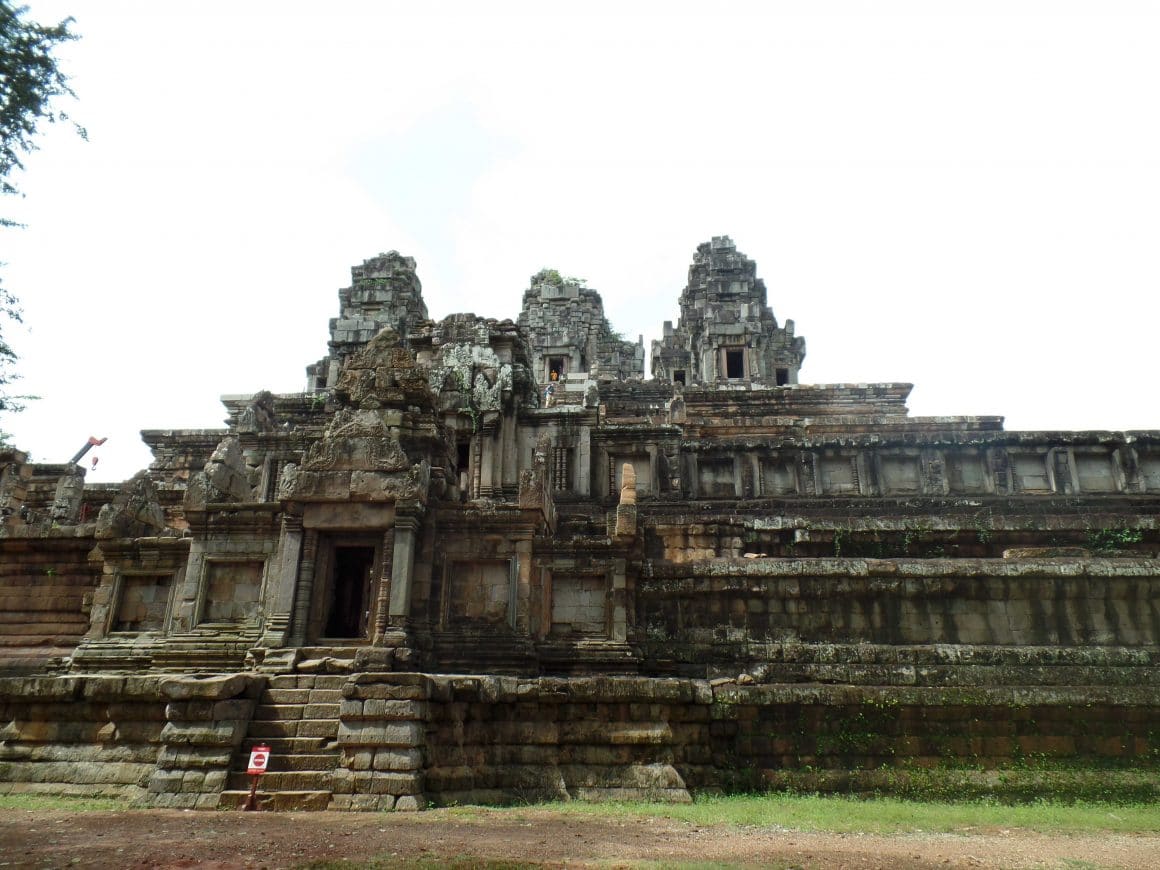 The next day we visited the Ta Phrom. This temple gives a good impression of how the French found the ruins. The walls, windows and gates are completely overrun with vines, roots and green moss. That’s why the Ta Phrom is often called the jungle temple. It demonstrates the power of mother nature. The thick roots demolished some parts into dust and stone. This really magnifies the charm of the temple. It’s like you’re going back to the year of 1860, the moment the temples of the Angkor were about to be discovered. A true Indiana Jones feeling. 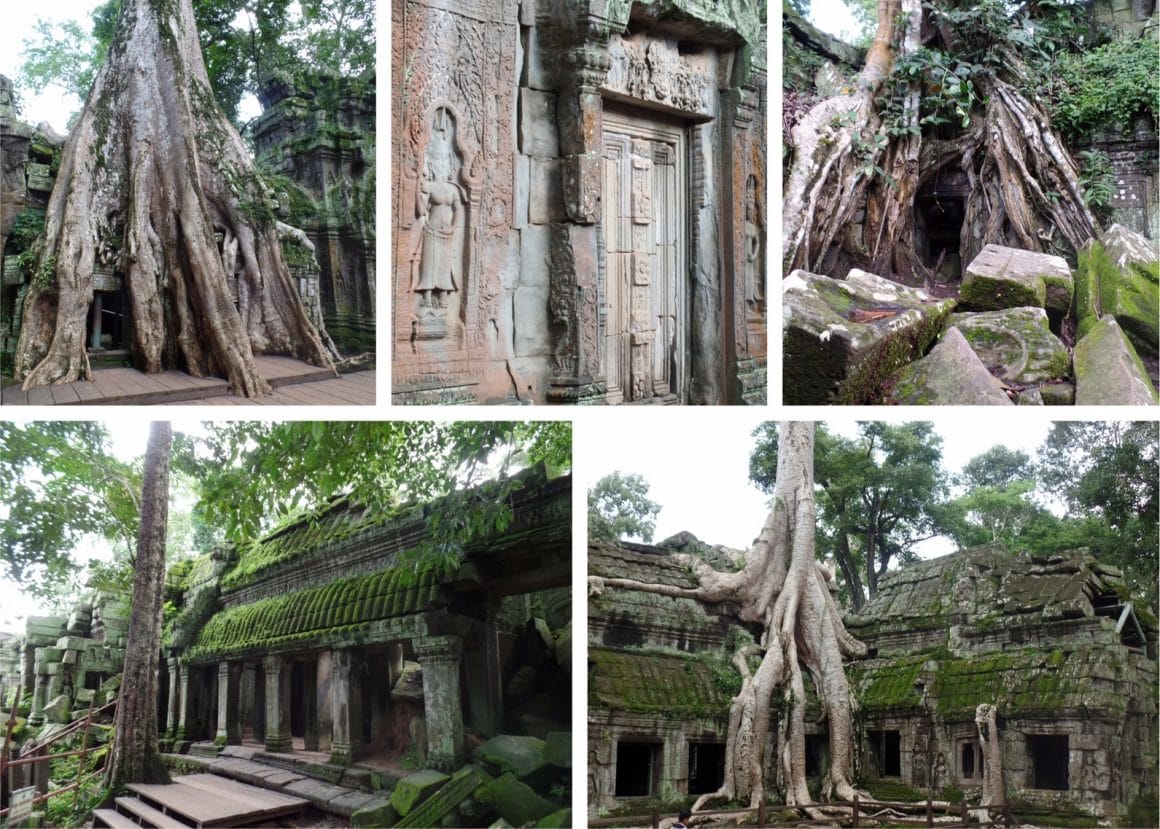 We ended our bike tour at the Preah Rup. Preah Rup means ‘Turn the body’, which is an indication of the function of this temple. It was a crematory. In the old Khmer empire it was a custom to outline the body’s form with its own cinders. In my eyes this temple is the light version of the Angkor Wat. The same three prangs, the same structure, only less detailed. The Preah Rup also offers an amazing view over the Cambodian jungle. The climb is rough because of the steep stairs, but it’s definitely worth it. A beautiful ending to our tour. 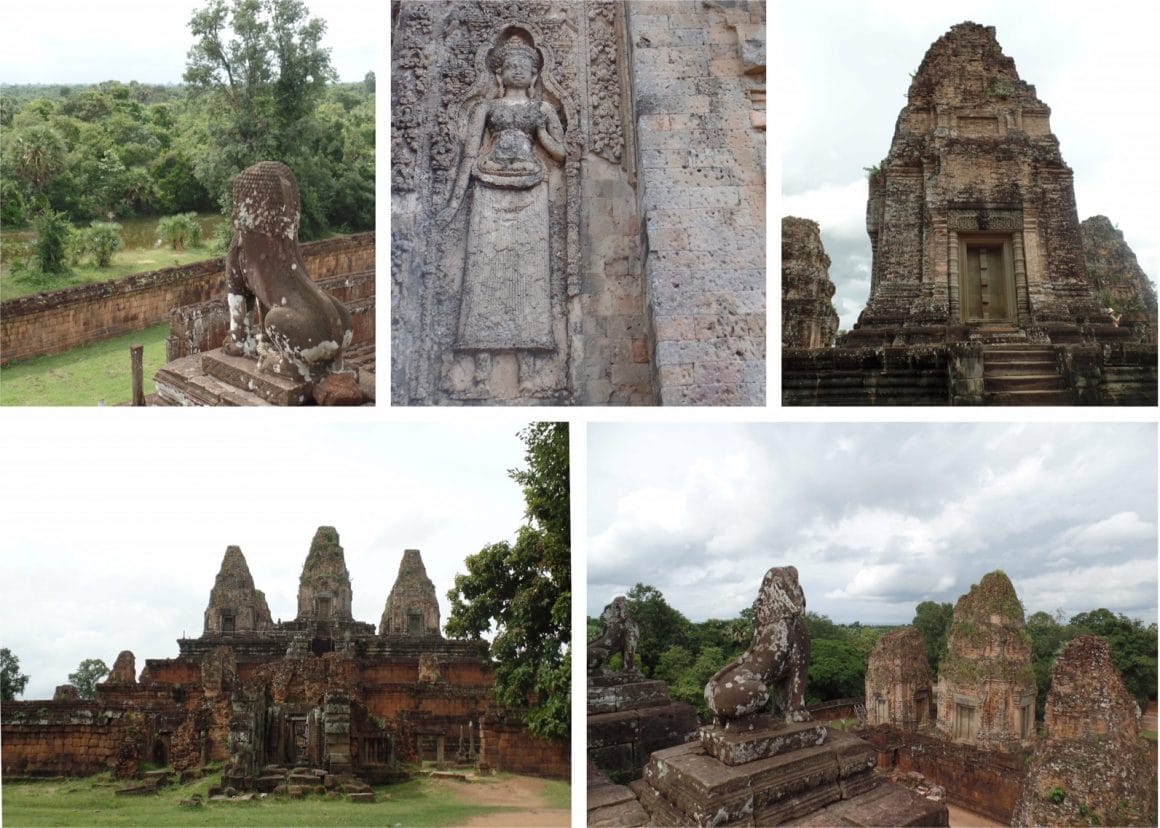 Yes, the Angkor is impressive. The semi-overgrown temples give the complex a mystical atmosphere. And this route only covers a fraction of the temples of the Angkor! There’s so much more to see. One temple I would have loved to see, is the Banteay Srei. According to some people this is one of the most beautiful temples of the Angkor. But because of its remote location (25 kilometer away), you’ll have to take a tuk-tuk to visit it. We decided to save this temple for our next trip to Cambodia.

Did you visit the Angkor ruins? 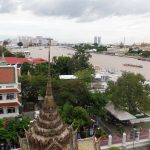 Story time Thailand: about the downside of kindness in the Land of Smiles 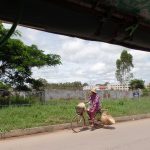 Cambodia: the land of a smile, a tear… and pyjamas